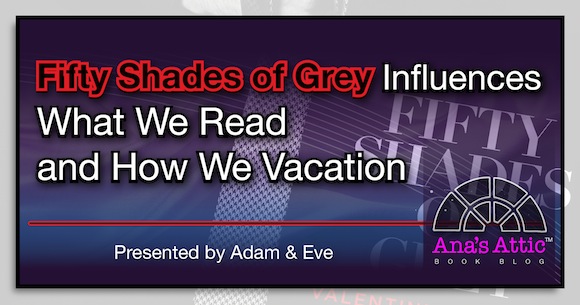 If you’re a fan of the novels, you’ve probably already heard how Stephenie Meyer’s Twilight series inspired E.L. James to write Fifty Shades of Grey. However, you may not have heard of the lesser-known projects that were inspired by Fifty Shades.

Personally, I get some of my best reading on vacation, so knowing that there are more books out there that can satisfy my Fifty Shades craving, especially when I have more time off this holiday season, is pretty exciting to say the least. While each author has not confirmed so themselves, some books were recently released (after the success of the series) and have a similar tone/BDSM incorporation.

The storyline follows main characters Ren and Cole, childhood sweethearts who lost touch over the years. Even though time has passed, Cole can’t stop thinking about Ren. But when he finally tracks her down, he discovers she’s in a Dom/Sub relationship with another man. Ren’s master agrees to let Cole have her for awhile on the agreement that Cole return Ren for his keeping, but Cole finds the promise harder to keep than he thought.

Sylvia Day’s Crossfire series, noted as a New York Times Bestseller, has also been compared to Fifty Shades recently. With four novels in the series (and a fifth on the way), they’re perfect for binge reading while on vacation. Just as Fifty Shades did, the first novel of the Crossfire series, Bared to You, will instantly have you hooked. GoodReads.com reviewers gave the story a 4.21/5 stars and rated the rest of the books in the series about the same.

The main similarities between the two series are with the characters. Bared to You also has a young, emotionally damaged billionaire who desires to control everything as a result of his emotionally turbulent childhood. And then there’s the fact that they also share the common characteristic of red-hot sex scenes.

Of course, romantic literature isn’t the only facet that has experienced the impact of the brand. In addition to the plethora of similar novels that can be read while spending time poolside or in front of the fire, other products have changed the way that we spend time on vacation when the lights go out. Just as Christian and Ana did at The Heathman Hotel, new Fifty Shades items can make any hotel room especially arousing. The Fifty Shades of Grey novelty line from AdamEve.com is as popular as ever, with new reviews consistently posted by users who relish the “in-novel” experience the toys grant. While the hotel in the novel is a real place in Portland, Ore.—you can learn more about it here—Ana and Christian had no choice but to bring their own goodies along to make the experience a seductive one. Now an actual Fifty Shades of Grey-inspired hotel in Vilafranca, Spain is in the works.

Whether you can afford to head to Spain doesn’t necessarily matter, of course. You can always bring your must-use toys along to turn your vacation accommodations into a sensual getaway—just be sure to leave room for your books. That’ll make sure you’re next romantic getaway is a steamy one.