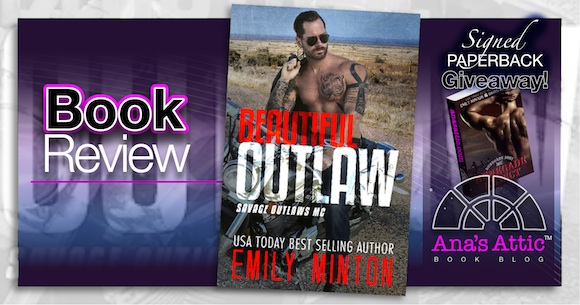 First in a series of Standalones

I’m really picky about my MC books. I have read a few of the best series, the ones that started it all, and I am very wary of picking up new ones, I mean how much more can you do with an MC book? Well, I’m glad I decided to read Emily Minton’s Beautiful Outlaw. Yes, it’s an MC book, but there is so much other story going on that it was a unique storyline, and I don’t think I could compare it to others.

Laura has been married to a man who is 27 years older than her for 10 years, since she was 18. She was forced to marry him when he threatened to take away her sick mother’s health insurance if she didn’t. This guy was a complete whack-a-doo. He made Laura, curvy, blond, happy Laura into a replica of his dead wife, Gwendolyn.  So much so that she had numerous plastic surgeries, went by the name Gwendolyn, and was rarely able to see the very family she was doing this all for. When things got so bad she had to leave, she turned to her estranged brother.

Laura’s brother, Jeremy, now a police officer, realized that the only way to truly get her safely away is to get her a new name (Shay) and IDs, and send her to live with his buddy from the service, Bowie. Bowie is VP of the Savage Outlaws MC, and he had fallen for Laura through her letters and photos to her brother. Until he sees her, that is.

This uptight bitch is Laura, the same girl that used to make my dick hard as a rock. Now the damn thing is shriveling up at the sight of her. Any dreams of having Laura in my bed quickly fade away.”

Bowie made Laura feel safe for the first time in years, but he callously left her with his mom and sister, not knowing that she was running from a crazy ex. But she began working her way under his skin a little.

She may be about as uptight as a person can be, but there wasn’t a bitchy bone in her body. I swear looking at her reminded me of broken glass. It was like she was begging me to put her back together. That shit ain’t happening. I don’t do commitment, and a woman like her would want it all.”

Bowie took off on club business for four long months, and when he returned, he found Shay looking a lot more like the Laura he used to dream about. He blonde hair is back, her curves filled out, and the life and spark came back to her eyes (as well as the real color). She also had every guy in the club eying her for their old lady.

Not the scared, frightened of her own shadow, little mouse I met at the bus station. She’s beautiful, confident and everything a man could want. I know I sure as hell do, and not for one night either. This is the kind of woman I wouldn’t be able to get enough of, the kind I see wearing my patch.”

Bowie lets his intentions be known right away, in his alpha, dirty talking way.

I like his beard,” Shay says, her voice low.
I turn my eyes to her and shoot her a smile. Leaning down to whisper in her ear I say, “You’ll like it even more when I’m between your legs.”

And then he really lets her know… 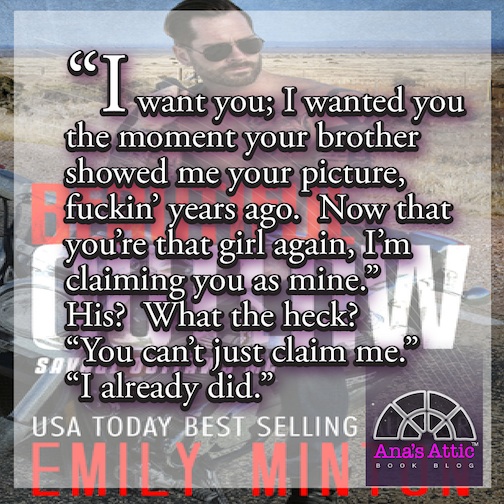 Beautiful Outlaw wasn’t really what I was expecting. It had a unique story where Shay, the heroine is escaping from her crazy ex. I liked that there was an exciting storyline that kept me on the edge of my seat, and it wasn’t all about MC wars. In fact, much of the book is outside of the club life. I gobbled this book up, went through the gamut of emotions, and quickly messaged Emily that I absolutely loved it. If you like MC books, this is a great one, though not as gritty as many I have read. And you definitely don’t have to be an MC romance fan to enjoy Beautiful Outlaw.

There are no paperbacks of Beautiful Outlaw yet, so Emily has donated a signed copy of Renegade Reject to give away! 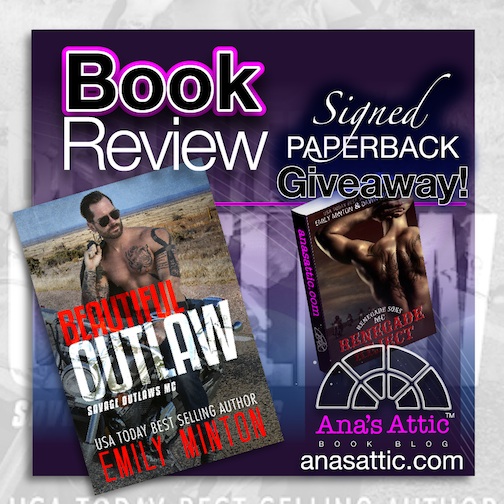