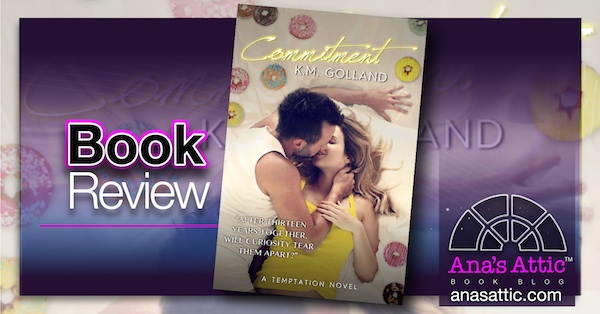 Standalone, though it is #5 in a related series as well.

Commitment by KM Golland is one of my new favorite books! I think it’s a must-read for any woman or man who might be happily married but might also be stuck in a bit of a rut. I am married 26 years and we went through some serious ruts over the years. I think every woman would find something relatable, maybe just knowing a friend is going through the same. I can tell you, ¾ or more of my married friends have gone through this in their marriage and a number of those marriages didn’t survive or are on very shaky ground.

I really hate that Commitment is lumped into her Temptation Series (though the title fits) because I think everyone should read it but I know so many people would be put off by the fact that it’s #5 in a series and feel they either have to read the ones before it, or they won’t even read it at all. I read the first back in 2012 or 2013 and haven’t read any since, so I don’t remember it at all. Commitment stood alone just fine for me. There were a couple of things that may have been better if I read the previous books, but not once did I feel like I missed something.

Natasha “Tash” Jones is happily married with two boys. She loves her husband, loves her life, but it’s a busy life, with both parents working and two kids. There are only so many hours in a day, and plain old sex just isn’t a priority.

It was disheartening, really, having sex with my husband because I felt guilty. Sex shouldn’t be like that when you love someone. It should be exciting, rewarding … enjoyable. It shouldn’t be an obligation or a score settler. But that was exactly what it had become where I was concerned. And I hated that.

I wouldn’t exactly call him boring, but he wasn’t Christian Grey or sexventurous. He was just happy do the same-old, same-old every time. Okay, so he was a little boring. It didn’t matter though. I still loved him deeply.

Dean was so awesome. He is the sweetest guy and he is crazy about his wife. He still wants her desperately, if only she didn’t pass out every night after work, leaving him and his hand all alone.

Can you say “awwwww….” They have been together 18 years and she is still his everything. But he is so clueless.

I’d found this great channel a few nights ago that had some hot, kinky shit. Shit I’d never try on Tash. My wife was adventurous but not in the bedroom. She liked it soft, smooth, sensual and missionary. She liked our sex life as it was. And that was fine. I wasn’t complaining. I loved having sex with Tash however it came. Pun not intended.

When the head of security at her office starts to flirt with her, Tash can’t help but feel flattered. Dean might be thinking all the wonderful things about her, but who can remember the last time he told her? So you have Dale, this big, hot, sexy head of security, and he is REALLY flirting. Making her feel sexy as hell, making her feel wanted, giving her dirty ideas, noticing the little things about her like sending her favorite flower instead of the same old red roses Dean sends whenever he’s in trouble. This all just drives her further from Dean and makes her realize all the things her marriage is lacking.

As they start to get some great advice from friends passions ignite again. But can they survive Dale from security? 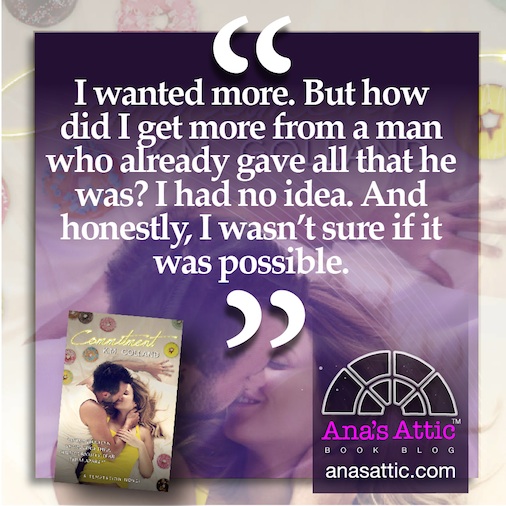 One of my favorite things about this book is that there was really nobody to blame for the downturn of their sex lives, it was both of their responsibilities, and I loved how KM Golland kind of smacked me over the head a bit and reminded me.

“Most women prioritise it below chores. Why is that? It just doesn’t make sense. A chore is something you don’t want to do but do because you have to. Most women treat sex like a chore, and that’s a huge problem. Sex should not be a chore. Sex is pleasurable.”

Oh how I wish I could get my husband to read this. It’s honestly like a handbook on how to keep a strong marriage all tied up in a hysterically funny and emotionally poignant story.

Commitment is a must read for married couples, both men and women alike. I loved reading about a long-time married couple trying to find the spark they once had. Major temptation, lots of laughs, introspection, sexy times and great advice from friends show that marriage isn’t always smooth sailing. It takes work on both parts and the failure of a marriage can also happen from just being complacent. Commitment stood alone just fine, and I don’t think it’s necessary to read previous books in the series, but I really love KM Golland’s sometimes raunchy, sometimes immature humor, and will now be looking out for more new releases from her, I hope we have another with a more mature couple! Commitment was so unique in that it is a married romance, and it’s a top pick for this blog, already on my upcoming Best of 2017 list.

Commitment can completely stand alone, but the first 4 books are on sale (as of this post) for $1.99 each. 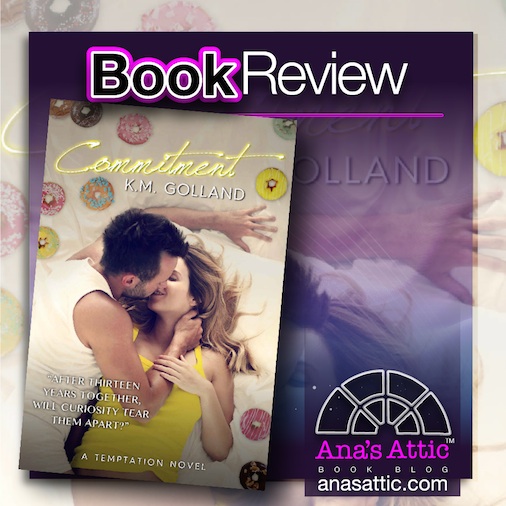