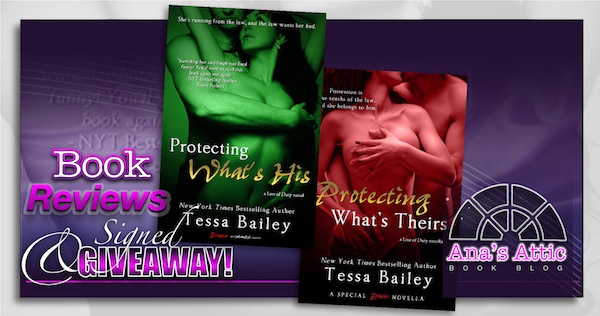 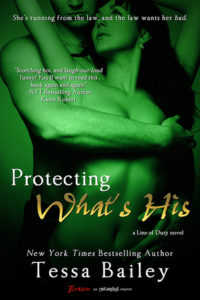 Protecting What’s His was my first (and absolutely not last) Entangled Brazen book, as well as my first by Tessa Bailey. And it leaves me with the question “WHY DID I WAIT SO LONG?” This book had everything I love in a book. A heroine I enjoy; a commanding, dirty-talking, alpha hottie; good sex scenes; lots of smiles throughout, a little angst to keep it interesting and a great epilogue.

Ginger and her little sister Willa are starting a new life in Chicago. Leaving their passed-out mom behind, they head to Chicago with a wad of cash Ginger found in her mom’s purse. Hoping to give her little sister a better life, they took off with their life-sized Dolly Parton statue, and their cowboy boots and whatever else they could throw into the rusty pickup.

“Pick up the end! I can’t carry the whole thing, skunk-vag!” (I knew I loved the book from this line alone.)

Derek, the police Lieutenant who lives across the hall wakes up with a major hangover and has to go to a funeral of one of his own and hears the girls arguing as they move in.

“Did he just hear one of them call the other donkey-queef?”

As soon as Derek spotted Ginger though, he knew he was a goner, despite the outwardly unfriendly first meeting.

“He knew in that moment that his peaceful existence had been shattered. With her living across the hall from his formerly quiet respite from work, he’d be forced to walk past her door each day, knowing exactly what lay on the other side.”

Both Ginger and Derek couldn’t stop thinking of each other all week, so Derek wasted no time letting her know what he wanted.

“Let me be clear, Ginger, since you insist on talking in circles. I want you underneath me in my bed. I want to be buried inside you so deep that I have to remind you of your own name. And I want those motherfuckers leering at you from the other side of the bar to smell me on you for a week afterward.”

But Ginger makes him work for it.

“The longer it takes me to get between your thighs, the rougher I’m going to be when I finally get there. Understand?”

Yummmmm. Dominant, commanding Derek was just delicious. I loved how he was commanding in the bedroom but he made it clear that Ginger could bring him to his knees.

“You like that, beautiful girl?” When she whimpered, he leaned over and spoke directly into her ear. “Good. That was for the hard-on I’ll be walking around with tonight. And you’ll goddamn wear the imprint of my hand on your ass for it.”

Protecting What’s His by Tessa Bailey really has everything I love in a novel. Megan has talked about it so much, and we literally have the exact same taste in books. I am so glad I listened and finally read it. Now I can’t wait to read the rest of the series! I can see what Angie calls these books “like candy” because you can just gobble them up and they are delicious, quick, satisfying but decadent reads. Had this been a 1st person narrative, it would have been a perfect read for me, but either way, I can’t wait to read more from Tessa Bailey. In fact, I had to read the next novella right away. 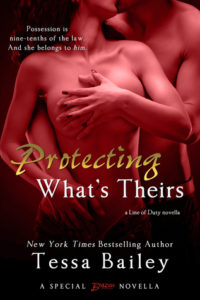 “I’ll never be cured of my jealousy. Not now. Not in fifty years.” He gripped Ginger’s hips, worried her ear with his teeth. “And don’t pretend for a second that you don’t love it.”

Protecting What’s Theirs is a quick 48 page read that is more of an extended epilogue to Protecting What’s His, checking in with the couple a year later. Derek and Ginger are happy, and things have been going well for them. Alpha, dirty-talking, possessive Derek makes it clear how much he still wants Ginger.

“Derek sampled his woman with teasing licks, purposely avoiding the tender spot dying for his attention. Fuck, she tasted like…Derek abandoned every adjective his lust-fogged brain could manage, discarding them as inadequate. She tasted like HIS. That’s what the fuck she tasted like.”

Ginger receives the shock of her life, and just when she needs Derek to be there for her, he starts pulling back. Working all hours and not opening up to Ginger, he presses all of her insecurity buttons. His reason, that he doesn’t want her to worry about a big raid he has going may have been an understandable reason, but it pissed me off!

As a dominant guy, Derek has demanded honesty from Ginger, and he didn’t trust her, or think she was strong enough to share his burden.

Though it pissed me off, I actually thought this was a good twist. It’s good to see a couple still learning and working out their differences. Because there is no doubt how much these two love each other.

“Sometimes I look at you… and I can’t breathe around these feelings.”

At 48 pages, this is a little too hard to even rate as a novella, so I am giving it the same rating as the first book, because I read them as one long book anyway. I’ll be reading the rest of this series from Tessa Bailey through the summer. I can’t wait for more alpha-male deliciousness.