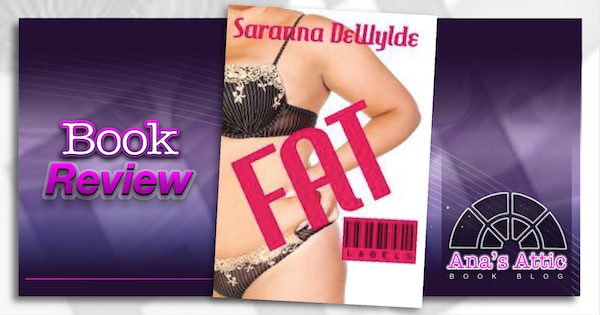 Immediately I was able to relate to the heroine in Fat (Labels #1) by Saranna DeWylde. I can’t count how many times I’ve been told what a beautiful face I have (thanks, I know, the rest of me is hideous). Growing up with a gorgeous, skinny mom and two gorgeous skinny sisters don’t help things.

I have read other books with curvy heroines that I just couldn’t relate to, no matter how good the book was. These were confident women. Women who embraced their curves and wore leather and sparkles. I’m a fat girl who hides. I love fashion, but it looks awful on me (though I still try). I’ve tried to be a confident woman but I can’t. I have eyes.

Claire Howard is 5’10” and a size 26. She is a big girl, but apparently she’s still pretty damn sexy! Maybe it’s the bodacious tatas she has poking out of her clothes. Maybe it’s the great line of clothes she is wearing from her website Chubbalicious. Or maybe it’s because Kieran, her roommate, is a male stripper. But to me, I think it’s because of her outward confidence. I know a few women that size who just come off totally hot to me. Partially because they are, but partially because their confidence makes them that way. Claire is confident on the outside, but inside her body negativity was like reading the post I wrote for Starting on Monday but thought it was too much of a downer to post for weeks.

“I had him fooled, I had most of them fooled. There were days I even had myself fooled and I believed everything I said about thinking I was beautiful and sexy at any size.”

Claire and Kieran are roommates and best friends. She spend a lot of time at the male strip club he works at and kind of has an extended family with the guys. She has always been attracted to Kieran, but never acted on it. He has a steady stream of woman and she’s just fat.

“They’d all wonder if I was his sugar mama, if I was paying his bills, or what exactly I had over him that might explain why a guy like him would ever date a woman like me.”

But when Kieran suggests she date Brant, a fellow stripper, who has been attracted to her a long time, Claire says no. Why? Because he is 5’6″. Pot, meet kettle. But after she hears Kieran giving her friend a ‘birthday gift’, Claire decides to give in and go out with Brant. I loved Brant. He was confident (he’s a stripper!), sexy (again, he’s a stripper!), tender, warm, funny and smart. And dirty…giving Claire a big O in public on their first date. (I have a major Brant crush!)

“I’m going to make you come so hard and long you’ll beg me to stop.”

But when it came right down to it, I was totally able to relate to Claire. I was able to relate so much it made me cry at the same time Claire wanted to cry.

“I didn’t want to be bare in front of him, my body exposed–all of my fat out there for him to see.”
“He still wanted me. But I didn’t want myself. So I didn’t understand how he could want me.”

But when Kieran realizes that Brant is with the woman he’s wanted…he joins in. 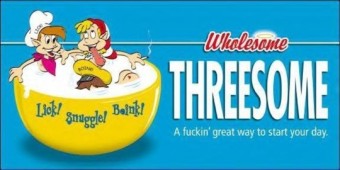 Though I’m focusing on the sexy stuff,  this isn’t really an erotica book, nor is it a romance, though it has elements of both. There isn’t a run off into the sunset happy ending. It was a book about labels. And living and loving your life despite them. Claire is fat, Kieran is gorgeous, Brant is short, Bex is a slut. We all have labels to overcome.

Fat by Saranna DeWylde is a very different book. Since it is more about a woman’s journey to overcome her own labels than a romance, it left me a bit melancholy. The heroine was so relatable it was like reading my own thoughts on paper. There was a very strong message in the story, and it’s almost too bad that the author felt the need to push it so much with male strippers. Maybe if the guys were a little more average I would have bought the whole thing. Maybe it would have more easily convinced me to join her in her journey to love herself. Send those two strippers here and I’ll start feeling good about myself too! The book was well written though, and I think I would enjoy reading the author’s other books.