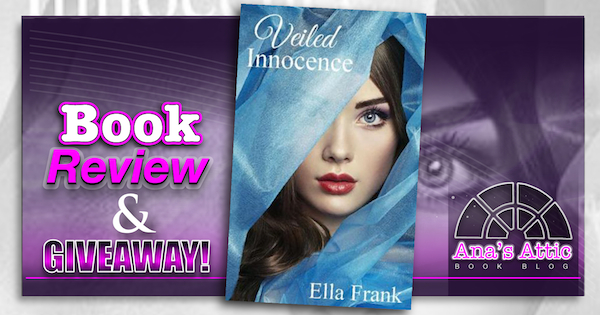 The trailer for Veiled Innocence by Ella Frank is so good I feel I need to share it before I start my review.

When I first received Veiled Innocence from Ella Frank, I was so excited! Yay! another totally hot read from Ella I thought. I didn’t read the blurb. I didn’t know anything. YES, this was still a hot read. But I must admit, I felt guilty for getting all hot from it, and to tell you the truth, I think the guilt  of the taboo just added to the enjoyment and involvement with the book.

“He’d calmed me when no one else could.
He’d saved me from myself.
If only they knew the truth…
But no one is listening, and his time is already up.
Tick, tick, tock.”

“My ending, staring right at me from the very beginning.”

18 year old high school senior Addison seemed to have it all. She was the gorgeous, popular track star. She is no innocent flower, the book shows her being late to school on the first day because she is having sex with her boyfriend. But her teachers won’t care, she is the star after all. So when she walks into class 10 minutes late and is confronted by a gorgeous new teacher who isn’t fawning all over her, she is hooked.

Veiled Innocence is actually told in a very interesting way. I don’t want to give much away, but you know from the start that something happens. Something bad. The present time is Addison in her shrink’s office, and from there, the book is told in flashbacks from both Addison’s and her teacher, Mr. Mckendrick’s point of view.

“Like a lion, his stare was fierce as he appraised me. All men did–they couldn’t seem to help it. No matter how inappropriate they knew it was, I always drew their attention….I knew what I had and I wasn’t afraid to use it.”

“The girl in front of me had a face of a woman that would bring men to their knees.
Men just like me.”

Addison is brazen, forward, and goes for what she wants with no thought to consequences, at least at first. She is very broken from tragedies of her past, and she becomes obsessed and totally stalker-like with her teacher, while he fights her growing attraction to her.

“She was everything I couldn’t have and shouldn’t want, but the more she taunted, the more my resolve crumbled. Temptation had come to visit, and her steely determination would likely destroy us both.”

Though Mr. McKendrick is the adult, and he was attracted to her, I still find it hard to blame him. Any man would have folded at her unrelenting pursuit.  He is 32. Her teacher. But he couldn’t get her out of his head.

“Trust me, I do see you”, he stressed.
“You’re all I fucking see, Addison. When I close my eyes, when I open them, when I’m teaching. You’re. There. All. The. Fucking. Time.
Sometimes I wish I’d never seen you.”

Addison is clearly broken, but Mr. McKendrick calms the chaos for her. And for him, well, he could only take so much temptation.

“Temptation be damned. I’d given in long ago. She was now my very own personal sin.”

Let me tell you, when he breaks….yum.

“You’re going to do everything I tell you to,” I instructed. She let out a soft moan and my cock pulsed. “Nod if you understand.”
Quickly, Addison nodded.
“Good girl. When I let go, I want your bra to hit the floor, and then I want your hands on the counter.”

During the whole book, you know it ends badly. It has to. How can this ever work out? But WHAT HAPPENS? The mystery and suspense are such a huge part of the book, as well as the forbidden, taboo romance.

I really loved Veiled Innocence. It was a suspenseful, mind fuck, sexy, taboo book. You always feel a little off-balance reading it, never quite sure where the story could go, or where you even want it to go. You feel guilty for enjoying it. I just wish I totally fell for the characters, and really saw them fall for each other, beyond the sex. Still, Ella Frank’s writing is pure genius. She is my top three erotic authors and one of my favorite authors all around. Veiled Innocence just adds another aspect to her talent…the coming of age genre (NA).  I will drop anything to read the next book Ella publishes.

“Fuck, I was in heaven. I was also aware that I was pretty damn close to being assured a spot in hell.”