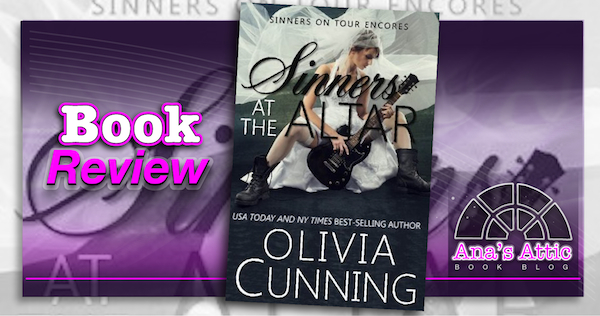 Sinners at the Altar (Sinners on Tour Series) by Olivia Cunning

Rock Star Romance. 4 epilogues in one. Can not be read alone.

For some reason, it took me three whole weeks to read. I picked up other books in between, partially because I had commitments, but partially because, as much as I loved these characters, this book was long and had trouble holding my interest. I think it’s the format of 4 novellas in one. I was afraid to settle in and get comfy reading the individual stories, because I didn’t know when they would end. Had these been releases as separate novellas, I think I would have enjoyed them more.

Sinners at the Altar is the wedding epilogue of four of the 5 Sinners. Trey will get his own book as part of the Exodus End Series (I can’t wait!). I enjoyed each story individually, but as I said, I had a little trouble settling in with them.

Appetite for Seduction – Brian and Myrna, epilogue to Backstage Pass

I love Master Sinclair. And Myrna is just perfect for him, she is strong, but so is he. They are the ‘lightest’ couple, without much baggage, and the most fun, so when the wedding is in Vegas, they do it right.

“When I look at you, I see radiance. I know pure happiness. Everything else pales in comparison. The thought of living a single moment without you tears me apart inside. Just when I think I love you as much as possible, you open your heart to me a little more, and my love expands—grows—wanting to fill every emptiness inside you.”

Now the thing about this one was that I expected it to end after the wedding and celebratory sex scene, but there was so much more. I think turning the page after each chapter, expecting it to be the next story really hindered my enjoyment  of this one, because really, it was a great story. Though we didn’t learn much more about the couple, it had been a really long time since I read Backstage Pass, so it was great to revisit one of my favorite kinky couples.

And Kinky they were! While Myrna is usually the one who takes charge a little more, I liked to see Brian step up.

“He tugged her hair more aggressively. ‘Don’t disobey me. I’m in control here. Slide your fingers inside that pussy and tell me how wet you are.”

Sweet Love of Mine – Eric and Rebekah, epilogue to Wicked Beat

By far my favorite of the book. This was the most emotional because Erik has never had a family to love him, and marrying Rebekah not only brought him her love, but her whole family. Knowing that they are a strange couple, Eric takes her to a costume shop to pick out something fun and unique to wear for their wedding. But when he sees her look longingly at a hideous costume wedding dress, he realizes she may be more traditional than he thought.

Eric used humor to cover his real emotions, and he is a funny guy so this one was also the funniest of the four stories and absolutely the most touching.

“Forever was just a word until I met you. Now it’s a promise. A dream. My cherished reality. I love you forever, Rebekah. My love. My wife.”

Well, I didn’t love Jessica in Rock Hard, but the beginning of this story made me like her even less. She was a bit whiney and her mother was a horrible shrew. No ender where she gets it! I don’t hate her or anything, but she didn’t win brownie points with me. She was a Bridezilla and her mom was Bridezilla squared, trying to make it a celebrity wedding and inviting people the couple didn’t even know. But though Jess is a stand up bitch most of the time, she never stood up to her mom before this.

Sed came off as a bit pussy whipped in Patience, but luckily, Jess grew on me a bit when she finally let loose a little in this story. But she really irked me in the beginning. Then, she was back to bugging me again. Everything was a competition or a fight with her. She couldn’t just enjoy her husband pampering her because it made him happy. He would do anything to make her happy.

We know how much Sed and Jessica like to do it in public places, well at least 4 public and a few private spaces were violated in this story, including in front of all the guests at the wedding!

“I love you!” he yelled. “You matter to me more than anything. I don’t want to live a single moment without you in my life.”

Well this one was just weird! I don’t mind a paranormal story sometimes, but not the addition of a paranormal element to an already established non-paranormal series. Luckily Jace and Aggie’s devotion really stood out in this one, because a lot of the storyline didn’t really work for me.

First, someone from Aggie’s past shows up. There was one particularly hot scene, but I really didn’t like her. Then, Jace and Aggie tour old castles during the European leg of their tour, and there is a whole ghost/possession story that goes on. It was actually a cute story line, but I just felt it didn’t work in this series.

I love how Jace and Aggie compliment each other. She is a super strong Domme, but though Jace enjoys pain, he isn’t submissive, a challenge Aggie likes.

“Panties off,” he growled, too far gone to think about what he was doing.

“No wonder you love this guy. He fucks like a maniac. Jesus, how many times did he make you come?”

Though Jace could be all alpha, Aggie still had issues getting married…well not really married, but becoming a wife.

Until Jace explained all that a wife is to him…

“…Wife, the only one who holds my body, who holds my heart”…”Wife, the owner of the only body I desire.”…”Wife, who accepts me into her body, holds me within, blinds me with pleasure.”… “Wife, who I love above all things and will cherish until the day I die. My wife. My one. My only love. My Aggie. My wife.”

I can’t wait to read Trey’s book. He gets his very own! All in all, I really enjoyed this book. But it was very long. I would have been much happier to pick up one every few months, since each story was over 100 pages. Jace and Aggie’s book would have been great to release during Halloween and I would have rated it higher. There was lots of the sex that we love the Sinners for, lots of the fun banter among bandmates, and lots of the sweetness and romance.

But not knowing how long each book was going in definitely hindered my enjoyment. So for your own knowledge, each book is about the same length and takes up about 25% of the book. I think if each story was shorter (which they easily could be) or each one was released separately I would have enjoyed them all more.

Purchase Sinners at the Altar by Olivia Cunning

Links to all of my reviews, plus the blurbs and purchase links can be found here.