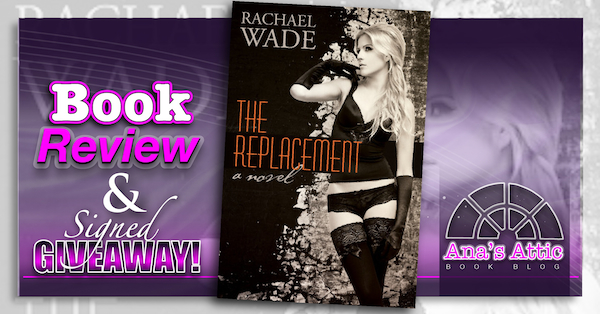 The Replacement by Rachael Wade

Older New Adult with plenty of sex. Standalone (for now).

“I’m Elise Duchamp, and I destroy relationships.  I destroy people.  Wives, girlfriends, good people.  People like you.  I fuck their husbands, their boyfriends, eat their food, sleep in their beds.”

The Replacement by Rachael Wade is everything I normally don’t like in a book. I usually need to like my heroine to enjoy the book, and cheating and lying are two of my biggest turn-offs. Yet I loved The Replacement. I rooted for Elise. I needed to see her change. To get past who she thought she was, and become who she was meant to be. But first, she had to be her own something.

“I didn’t always sleep around. That didn’t start until college. My mom might not have needed me anymore, and dad might not have wanted me, but that was easily remedied. The world was full of needy people.”

Elise got a certain high off of being so desperately needed by these guys. She knows she is fulfilling a need they have to cheat, and she doesn’t think she is worth any more than that. She grew up learning that beauty is all you have, the only way to make people want you, to need you. Her disgusting father accused her of causing her mother’s cancer, making her ugly, then he left, never to be seen again. Just drove away, leaving his daughter to care for her dying mother. Her best friend left too. She had nobody.

She finds solace in being needed for the high of cheating. She has self-respect, to a point. But her self-respect is that she doesn’t hide what she is. She won’t bullshit you. She knows exactly what she is doing, and isn’t ashamed to admit it. Maybe for me, that was her saving grace. She wasn’t a sneaky liar about it. She owned who she was and made no apologies.

“That’s all you are, you slut —a replacement. Sloppy seconds and an in-between quickie for every guy in this town who’s looking to fill a hole. All you’re good for is that hot little body.”

Elise doesn’t care, she’s used to that. It’s what she grew up with. But she’s a ‘Franceophile’, and her entire goal is to save enough to follow her dream and learn French and go to France. She does have dreams and goals hiding in the self-destructive exterior. She has successfully pushed all friendships and relationships away for years. So when sweet, bubbly Natalie begins work at the diner with her, Elise does her very best to push her away as well.

Then Ryder, the new building handyman, shows up to fix her garbage disposal. Gorgeous, sexy, and different from everyone else, Ryder sees something more in Elise. He knows her reputation and doesn’t care.

“All I want to say to you is that you’re too goddamn beautiful, too goddamn smart, and too goddamn good for a life like that, you hear me?”

Despite her doing everything to push him away, Ryder won’t give up on her.

“You’re a little piece of heaven, baby,” he pants against my mouth, “even if your halo’s broken.”

She’s intent on destroying the budding friendship Natalie had with her and Ryder couldn’t help but get singed in the process. But still…

When she finally starts making progress, letting people in, and beginning two fledgling relationships, her past destruction haunts her.

“All of my hopes for being someone’s something follow Natalie out, reminding me of my true identity. I am a substitute. A misfit. A liar, a their, and a whore. I exist to be used, not to belong.”

But can the love of a good man change things? Can a life or death experience? What will change Elise Duchamp?

“Just because the world breaks you doesn’t mean it has to win, hon. You remember that.” -Jay

This was a unique story with a truly beautiful underlying message. Elise grew up with conditions…the only thing anyone would ever love about her is her beauty, if she didn’t have that, she’d have nothing. This story is about loving without conditions, but even more so, learning to love yourself. Elise’s journey was a tough one, yet there was hope throughout the entire book. Rachael did an amazing job with this story. It is not often an author can take a character we should all hate and make her someone to root for, but Rachael did just that, and taught us all a lesson at the same time.

“You go be your something, baby. When you get back you can be mine.”

Purchase The Replacement by Rachael Wade