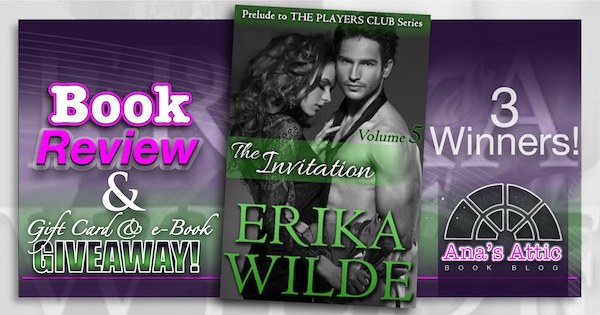 The Invitation (The Marriage Diaries #5) by Erika Wilde

The Invitation by Erika Wilde is the fifth book in the Marriage Diaries series. Though it can absolutely stand alone, I highly recommend you buy The Marriage Diaries 1-4 first. They come as a box set and were 5 star, 5+ heat reads for me. See my review for the first four here. The first four books average less than 50 pages each, but The Invitation doubles that, and let me tell you, it is a very full book for the amount of pages.

Dean and Jillian are celebrating their 20th wedding anniversary. This is what I love about this series; they are a still-young couple with a recently empty nest and they are spicing up their marriage, big time. While the first 4 installments were more sex than story (I was not complaining), The Invitation has a lot more character and story development while still being hot as fuck.

Dean, a former SEAL who now has a very successful security company, has a number of co-worker/friends who are members of the exclusive sex club, The Players Club. In the past, his friend Mac had offered him an invite, but he didn’t think Jillian was into it. Now though, things have changed. Their relationship has gotten way spicier. So Dean thinks he found the perfect 20th anniversary gift, an exclusive invite to The Players Club.

Jillian was also shopping for an anniversary gift, in her favorite upscale sex store. She has become friendly with the women who work there, and as she talks about her history with Dean, she realizes she is starting to feel the need for something more in her life.

“Her entire world had revolved around her husband and boys for nearly twenty years, and now that she had too much time on her hands she was beginning to crave something for herself.”

Dean is a total alpha. It was very important to him to be the sole provider for his wife, a man that would take care of his wife. And due to issues he had growing up, Jillian knew he would have issues with her going back to work.

So…back to the good stuff. Their anniversary–I loved this part: Jillian not only bought herself something special to wear, she bought Dean a pair of black silk lounging pants.

(I loved this line…my husband wouldn’t wear them either unless it was something I really wanted, one time.)

After changing, Dean went back in the living room and saw his wife:

“She’d managed to transform herself into what he could only describe as a sensual, gorgeous, goddess”

Dean loves her so much! And his reaction to the boudoir photos she gets him for their anniversary is priceless. Jillian accepts his gift to The Player’s Club with a bit of trepidation until they agree that there will be no sharing.

Aaah….The Players Club. I’d love to go to one of these places (if I had more body confidence). A totally upscale, classy sex club where you can indulge in any private or public fantasy. The night begins with a remote control, and watching some of the acts in the viewing rooms.

“Do you like watching those two men having their way with that woman?” he murmured huskily, clearly just as turned on by the sight….
“Keep watching,” he demanded in a rough whisper as his fingers brushed over her pulsing clit…”

Then he blindfolds her.

“Tonight is going to test that trust in ways that will shock you” …”And I need you to remember that I wouldn’t do anything to hurt you or us.”

Sigh…I love the alpha, confident and commanding Dean. And I love the strength and depth of their trust for each other. And…damn, I’m reading over that part again and…See ya. I’ll finish this review tomorrow. I gotta go find Mr. Ana.

I’m back, and let me tell you…I’m keeping this one on my kindle for frequent bedtime re-reads.

Where the other stories in this series would end here, there was so much more to this story, including Jillian’s new group, The Cocktails and Cocks Club (loved this!). When one of the ladies in the club offers Jillian a job, some angst begins.

Dean doesn’t want her working. Jillian wants this job…and let me tell you, Erika got me really nervous about my favorite married couple in this book!

It’s so rare to find a book with a mature, happily married, relatable couple. I mean, there is rarely much of a story beyond the initial falling in love, unless there is some kind of action or mystery. That’s what I love about the Marriage Diaries. We have a long-term, happily married couple, who trust each other and love each other implicitly. They have excellent communication, and find a way to get over the bumps that can happen in a marriage. Dean is a total alpha, and Jillian has been happy to be a good little stay at home wife for years, but as she gains confidence in the bedroom, at translates to the rest of her as well. I really enjoyed seeing Dean come to terms with that and how Jillian stood her ground.

The Invitation by Erika Wilde really showed a healthy, sexy marriage, and how they work through major problems. I really hope that The Marriage Diaries don’t end when The Player’s Club begins, because I love reading about a relatable, sexy, long-time married couple.

Purchase The Invitation (The Marriage Diaries #5) by Erika Wilde

3 WINNERS: A $10 Amazon Gift Certificate and an ebook copy of THE MARRIAGE DIARIES, Volumes #1-#4. (If you have already read The Marriage Diaries, she can send an author Swag Pack instead, US Only for that)