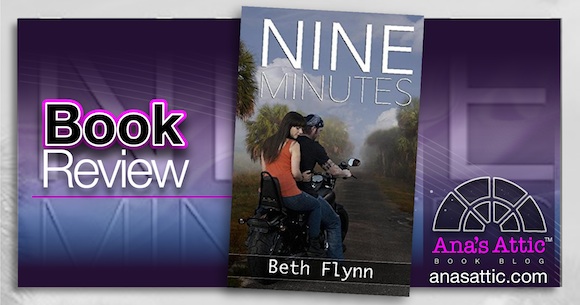 Book 1 of 2. Contemporary. Not sure if this would be a Romance.

I don’t normally like books set in the past, but this one is in the 70s (I was alive then, sadly, and the biker music of the time is my favorite) and takes place in Ft. Lauderdale near my home and Wicked Book Weekend. It’s so rare for a book to take place here, I had to read it. The prologue takes place in 2000, and the rest of the book is told in past tense. 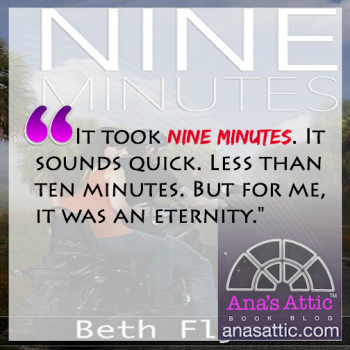 I swear, I began to do a little investigating to see if this was a real story. The way Beth has the book narrated, it’s like reading a diary, or almost a pieced together court record, a recount of events that lead to the events that happen in the prologue. It feels so real. But for me, this type of telling created a bit of a disconnect, though I’m not sure it isn’t meant to. This type of narrative is also what makes Nine Minutes a very unique read.

First off, we know a little of what was going to happen from the prologue, and then add the past tense re-telling of the story and it made Nine Minutes different from a book that you experience right along with the characters. That also made difference between a great book (which it was) and a great book that I loved so much I hugged (I’m still not there).

15 year old Ginny has grown up with a mom that really couldn’t care less about her, but she had a home. One day while waiting for a ride home from a convenience store, a young biker chats with her and flirts, and offers her a ride on his bike, setting off a 25 year chain of events. Ginny is abducted, given a new name, and forced to live as an old lady to Grizz, the head of a biker gang on the edge of the Everglades.

Grizz is rough, nasty and mean. As brutal as they get.

I would see his brutality unleashed on many people over the coming years, regardless of their sex, age or physical ability. It didn’t matter. I wondered if getting beaten or having your tongue cut out was just run of the mill for his women. I would later see that he never abused anyone for the sake of abuse. He didn’t enjoy it. It didn’t please him to hurt people, but he never seemed to show any kind of remorse when he did.

Grizz was obsessed with Ginny (now Kit), but never unleashed that brutality on her. In fact, he almost has you doubting yourself. This guy was such a sicko, but then he is completely sweet to Kit.

Who was this person who could hack a man to pieces one day and save a kitten the next?

I don’t want to give away any more from the book, because you seriously just need to read it yourself. There are some really brutal moments, and Ginny is 15 when she is abducted by this (I would guess about 30+) year old. But those moments, though described a bit, are more fade-to-black. There were also some sweet moments, and some roller coaster moments. Though I wouldn’t call the end a cliffhanger, there is definitely more to the story, but I am good with where it is left for now.

Nine Minutes is anything but your average MC Romance. It’s unputdownable, gritty and raw, and reads like an autobiography or a news report. Told in past tense, knowing the outcome; gives an entirely different feel to this story. This was an excellent read, but for me it wasn’t the ‘best of the year’ as so many others say, because I had a little trouble completely connecting due to the past-tense retelling. Nine Minutes was certainly one of the most unique and compelling books of the year, and I can’t wait to read the next in the series. 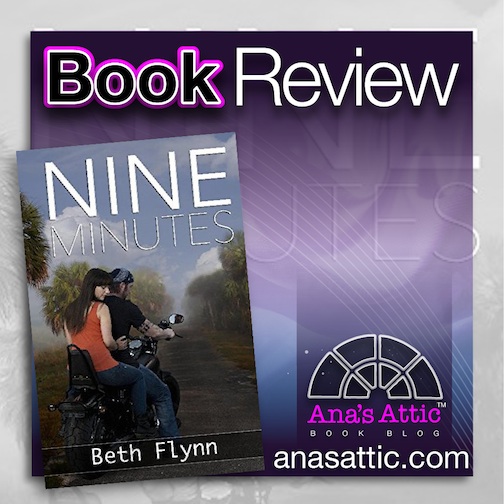