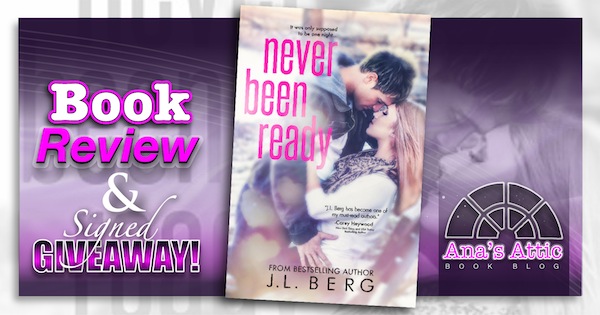 Never Been Ready by JL Berg is the second in the Ready Series. When You’re Ready was amazing, and though each of these books stand alone, and there is a decent recap, I highly recommend you read When You’re Ready first to get to know all of the characters.

It’s a pleasure reading about slightly older characters, I’m getting tired of the college aged books I read so much of. So I loved how When You’re Ready was about a widowed mom finding love again. Never Been Ready, this book, is about the snarky, spunky best friend. Leah was a labor and delivery nurse, and always going out of her way to help people. She hooked up with her hot actor crush, Declan, when he was in town visiting his friend Logan in the first book, then he headed back to Hollywood.

But the playboy couldn’t get her out of his mind. And for Leah, nobody compared to Declan.

When her friend Logan was working the ER, a young boy came in from a car accident. The 7 year-old lost his mom in the accident and had no other family. Leah could relate; her mom left when she was seven and her dad was a piece of shit. Leah was called in to comfort the boy, and at this point we really see Leah’s compassion and generosity.

Declan, a reluctant movie star, really wanted to be a director. But he had to pay his dues, and acting and co-producing a movie was his first step. The Civil War movie was shooting in Virginia, where Leah lived. And the first stop he planned on making was at her place, even though they’d been out of touch for six months.

“She haunted me, filled my dreams and made me ache. I’d tried to rid myself of her by losing myself in other women but no matter how beautiful or sexy, they didn’t hold a fucking candle to Leah. It was her face I’d pictured every time I’d come, her body I’d felt every time I touched another and her moans I’d heard echoing through my ears.”

“I couldn’t go on like this, obsessing about a woman I didn’t want anything permanent with. I figured after one more night, maybe two, with her…and I’d be cured.”

But when he showed up at Leah’s door, he was fully rejected. The sassy heroine would see Declan on HER terms. And she made him wait, big time. When she finally agreed to see him, it was only on the agreement that they would be exclusive while they were sleeping together. Leah wasn’t looking for permanent, but she didn’t want to worry about where else his dick was. She knew he was only here for a few months while filming, and didn’t expect more.

My-oh-my…when they finally got their fix of each other it was hot as fuck! (This is all still at the way beginning)

“I think we’ll start with the top. Lose it”…
“Now the skirt, Leah”…
“Do you remember what it feels like to have me buried deep inside you?”…
“Back against the door,” he commanded…
“From now on, Leah, you will only scream my name when you come.”

Oh boy, pages of the hot stuff. Declan James, you are perfection. I don’t want to spoil the rest of the book, but I just loved this couple. Both of them fight the real feelings they have, since they were only supposed to be fuck buddies. Declan was starting to understand how Logan went from playboy to instant husband and dad.

“Lines had blurred, and I’d felt myself growing closer to her. Although I still felt every ounce of fiery passion for her, I also felt something deeper brewing. I’d put the brakes on and only made our usual house calls, never lingering too long even though my gut had told me to stay.”

But when Declan sees another guy interested in Leah…well, the possessive beast rears his head. And when she is hurt, it’s all over for him.

“Do you know what I see right now?” he whispered. Unable to speak, I just shook my head.
“Perfection. I see absolute perfection.”

Oh how I loved to see this Hollywood playboy turn into a puddle of goo for Leah. But they still had a lot of hurdles to overcome.

I usually try to shy away from using quarter stars, but I enjoyed Never Been Ready a little more than When You’re Ready which I gave 4.5 stars to. I just don’t feel it was memorable enough to move onto my 5 star list. The sex was hot and juicy, but I need some kink to kick it to a 5 Heat for me.

Overall though, I absolutely loved Never Been Ready. It was just one of those feel-good romances. I loved the fact that they weren’t college kids. They were older, and there are kids involved.  There wasn’t a lot of angst, just a lot of corny grins and smiles throughout. I loved how there were no stupid misunderstandings, nobody running away for dumb reasons, just a nice, healthy, adult couple who fall in love despite some pretty big obstacles. Never Been Ready has earned JL Berg a spot as one of my favorite authors. When I’m looking for a feel-good, low-angst, lots of hot sex and fun banter kind of book, I know JL Berg will deliver.