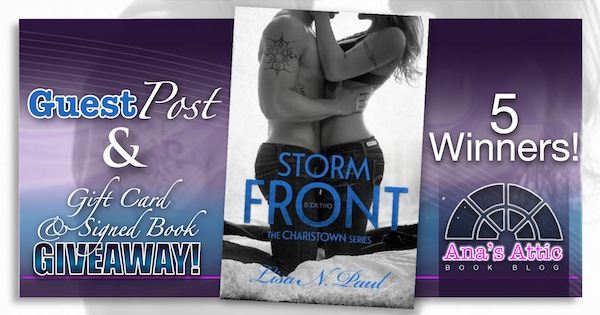 Storm Front is the second book in the Charistown Series by Lisa N. Paul. I really loved the first one, Thursday Nights, but I have been so busy I haven’t gotten to the second, Storm Front. (What a sexy cover!)

Each book stands alone, but each couple is about the group of people that hang out at Danny’s on Main. It kind of reminds me of Cheers/How I Met Your Mother.

The Darker the Storm, The Deeper the Pain…
Love knows no bounds when two people are destined to be together.
One fights to maintain the distance; while the other battles to close the gap.
The Brighter the Light at the End…
Will they move forward together or finally close the last remaining door to their past?
It’s time for Ryan and Ashley to decide. But once that decision is made,
there will be no going back…
Always Reach for the Light…
A Neighborhood bar where old wounds heal, friends become family, and some…become lovers…
Danny’s on Main is where their story continues… Where they all shelter each other during the …
Storm Front 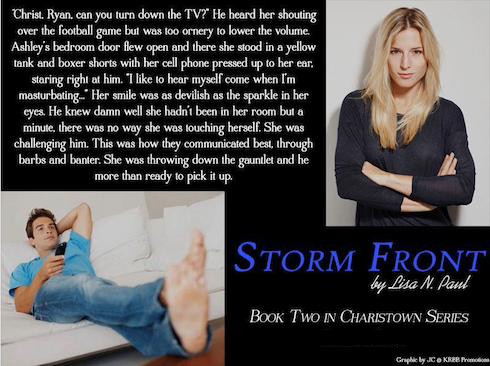 Thank you so much for taking the time to chat with me again. I’m so happy to see that you and your blog are doing great.

For me, since we last talked, some things have changed while others have stayed exactly the same. For example, since releasing Thursday Nights in May, I closed down my blog. It was such a difficult decision for me to make, but I realized that I was not able to give my readers the reviews they had come to expect from me. Weeks and even up to a month would go by without me posting a review and I felt horrible, so I made the decision to close down and move on. As you know, Lisa’s Reads was where I started, so I felt that loss deeply, but if I can’t give 100% then I will find a different way.

After Thursday Nights came out, not much changed. I was just a girl who wrote a book. In fact, it’s still that way. Every time people contact me about my stories, I actually get giddy. Don’t get me wrong, I love the world I am building in Charistown, but to know that other people love it as much as I do…God, Ana, it’s surreal. So when readers started asking for the second installment I was floored. The readers ARE what inspired me to pump up my game and keep to my time line.

I knew going into Thursday Nights that it was not going to be a one-and-done book. I personally, LOVE series. Not cliffhangers, but series. I love watching as characters grow and change. I enjoy seeing the supporting characters step into the lime light and the main characters take a step to the side. And from the second I created Janie I also created Lyla. Where Janie was meant to be the main character in the story and Lyla her faithful side-kick, scene after scene had Lyla leaping off the pages and coming to life before my eyes. I found myself having to remove sections in order to keep Janie from getting lost in Lyla’s light. Lyla was amazing and needed her own book. Once I started writing Thursday Nights, and “met” the other amazing people who lived and loved in Danny’s on Main, I realized each of them needed their stories told as well.

When we spoke in May, I told you that Storm Front was going to be a rough ride. I didn’t even realize at the time how rough it was going to be. Ana, Storm Front ripped me apart. That story is truly one of heartache, pain, love, loyalty, self discovery, and healing. In TN we were introduced to the group who embraced Danny’s on Main as their home. In Storm Front, we see how these people went from strangers to family. I truly believe that each of my readers will become family as well. I’ve heard from many people that they experience every possible emotion while reading SF, which is awesome because I experienced every emotion while writing it. I just can’t wait to share the story with even more people.

Last time we chatted, I told you that Kyle was the one character that was giving me the most trouble. I said he was a mystery to me. I knew I couldn’t give up on him. I felt like he was a beautiful soul stuck in a tormented body. Well, Ana, I can finally say that I have Kyle figure out and I CAN’T wait to share him with you.

Okay, enough about books. So at the beginning of the year on Facebook people sent around a list of Fourteen Random Thing About Me. If you received the list, you were supposed to paste it to your wall and fill in items specific to you. I waited for days to do it…hoping to avoid it all together. But in order to avoid any more tagging, I finally put together my own list. I thought I would share it with you.

Thanks again for taking the time to talk with me Ana. Hopefully we will meet up again soon!

1. I LOVE the color red! Red is sexy, naughty, and fun. It can be evil and silly but NEVER pure… which leads me to number

2. I can’t stand the color pink. Not only do I look like shit in pink… but unlike Rizzo’s thoughts in Grease – I’m too “unpure” for pink!

3. I am an ideas person. Seriously, my mind is like One-Eyed Willy’s Pirate ship from the movie, Goonies. It’s filled with gems. My problem is executing the ideas I come up with. I suck at that shit.

4. French Fries are, in my opinion, the greatest food to ever be invented. I love ALL fries. Curly fries, spicy fries, cheese fries, steak fries, but my favorite are McDonalds fries. Don’t EVER mess with my fries…that’s grounds for finger amputation!

5. I LOVE dessert! The only reason why I eat dinner is to get to dessert. I don’t need much…just a bite or two. But, mmmm….dessert is the BEST!

6. Sarcasm is my second language. I have a very difficult time relating to people who don’t understand it. It’s like any foreign language – you don’t have to speak it, but if you don’t know how to make out what I’m saying…at least some of my words…we are gonna have a problem. (shrug…it’s just how it is)

7. I LOVE THE WORD FUCK!!! It’s my favorite word. There are so many people who think that using profane language shows a lack of intelligence. I COMPLETELY disagree. I think the ability to use 1 word in so many different ways, shows pure genius!!

9. I love making people laugh hard. If snorting or fluids shoot out of their nose, that is extra points for me!!

10. I would rather be HOT then COLD… I despise being cold. which sucks because I am always cold.

11. Where I used to watch countless hours of tv each week (no seriously…it was scary!!!) I no longer watch more than an hour. I am consumed in books and … Facebook (hanging head in shame).

12. I laugh out loud from the PM conversations and the threads that I get involved in here on FB. Which is awesome because….

13. I LOVE LOVE LOVE to laugh more than almost anything else in the world. If you can get me laughing, you will have me as a friend forever.

Thanks so much for popping by! And what a generous giveaway!

Lisa is giving away signed copied of both Thursday Nights and Storm Front, a $10 Amazon card, and 3 $5 Amazon cards.