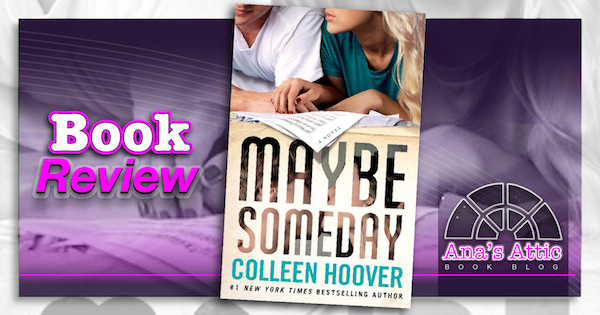 Colleen Hoover is an absolute genius. Every book she has written before this were 5++++ stars for me, so if you have not read her, you MUST!!! See the Slammed Series order here, and the Hopeless Series order here with the links to my reviews. Let me tell you right off, Maybe Someday did not disappoint. I absolutely loved it. But not quite to the same degree as all of her other amazing books.

One thing I want to point out right from the start…there is an epilogue that for some reason was not included in the book. An epilogue that to me made a big difference in my feelings and I wish it was included! GO HERE and the password is the last word of the book.

There are a lot of twists and turns in Maybe Someday, and this review will not be easy to write without giving them away, but as always, I will not go further than the blurb. I loved the integration of the music into the book. The songs by Griffin Peterson were written for the book and are fully integrated. The e-book has links to the songs as they come up in the story, and the paperback has QR codes (you need a free barcode reader if your phone doesn’t have one) that take you to the songs in the right spot.

The story begins on Sydney’s 22nd birthday when she catches her best friend and roommate sleeping with her long-time boyfriend. Over the weeks before this, Sydney was enjoying listening to her neighbor across the way play guitar on his balcony every night and making up her own lyrics to his mesmerizing playing. Ridge, the guitar player, is having writers block. When he saw Sydney singing along, he got her number and they began texting lyrics. They never met close up. Until Sydney was left homeless after she caught her roommate and boyfriend together. Ridge (sexy name) and his roommate Warren (loved him) and the bitchy Bridgette lived in a 4 bedroom with a room free, so Sydney moved in in exchange for writing lyrics for Ridge’s band.

Ridge and Sydney have an instant connection. They fight it hard, Sydney just ended a long relationship, and Ridge is still in one. Sydney would never want to do to someone what was done to her, and Ridge is completely loyal. But the pull is there.

“I did have a little hope. Although I wasn’t ready for anything right now, I thought the possibility would be there. I assumed that maybe someday, when I was ready, things could have developed between us.”

As Sydney and Ridge work together on songs for the band, their connection deepens, as hard as they try to fight it.

“Desire is easy to fight. Especially when the only weapon desire possesses is attraction. It’s not so easy when you’re trying to win a war against the heart.”

Ridge and Sydney are good people. They aren’t cheaters. But music is a powerful force that helps pull them together, despite their best efforts to fight it.

“Nothing in my life has ever felt so good, yet hurt so achingly bad.”

Colleen Hoover did something very unique in this story. She took a love triangle and made you root for everyone and no one. There wasn’t really cheating, but there was cheating of the heart.

“It shouldn’t be possible for the heart to love more than one person at once. “

“Hey, heart. Are you listening? You and I are officially at war.”

I’ll be honest, if this were written by another author, I may have rated it higher, but I expected more from Colleen. I know it seems unfair, because it was beautifully written and I didn’t want to put it down. Her writing genius was clear throughout the whole book. But there was nothing that made me ugly cry. My emotions weren’t under attack. In fact, at one point, I just got mad at Ridge for letting himself get to that point. There was just a little too much angst for me with a bit too much of a neat ending. Don’t get me wrong, I absolutely LOVED Maybe Someday. But to me, it was not on par with The Slammed Series or Hopeless Series.

“There isn’t a doubt in my mind that we could be perfect for each other’s life, Sydney. It’s our lives that aren’t perfect for us. “

Have you read it yet? What are your thoughts?