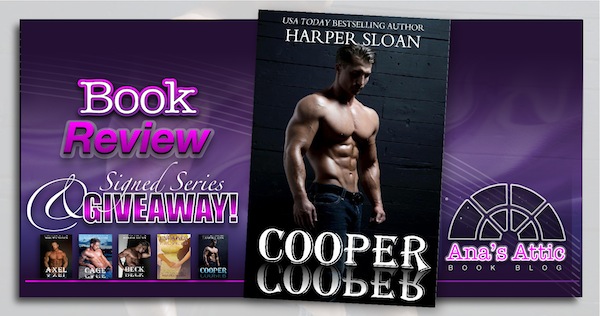 WARNING: THIS REVIEW WILL SPOIL PREVIOUS BOOKS IN THE SERIES. IF YOU HAVE NOT READ BECK, DO NOT READ THIS!

Harper can write some sexy-ass alpha males, but if you are still reading this, you already know that. If you have been reading my reviews for a long time, you will know that I have the memory of an ant. I remember if I loved a book, I remember the major plot arcs, but side characters? Not so much. So honestly, I remembered Asher was kind of dicky, but after losing his bro I got that. I remembered a pregnancy, and I didn’t even remember Chelcie (till I started Cooper and remember thinking Chelcie was kind of a whiny wuss in the previous book). So I went in a little blind. Harper didn’t do a lot of recapping and reminding in this story, so refreshing your memory with a Beck re-read isn’t the worst idea. I kind of wish I did, I think it would have made Cooper even better for me (and it was pretty great already)!

The prologue sets it up, and you immediately understand Asher. Asher and Coop grew up with such a horrible single mother. She was drugged out, abusive, and didn’t even feed her kids. They were dirt poor and little Coop was malnourished. Asher, being the awesome big brother, took care of his little brother and took it upon himself to be his protector for life. They were as close as brothers could be, and when Coop was gone, and Asher wasn’t there for the first time to protect him, it broke him.

“My brother was my reason for living. For as long as I can remember he was the reason I woke up, and now that he’s gone, I have no clue how to move on from the darkness I’ve been drowning in.”

“The only woman I want is the one who acts like I’ve got the fucking plague whenever I touch her.”
“No, I want one woman, and until I can figure out what has her running scared every time I hint at something more than friendship, I’m better off with my friends Jack and Jim.”

Chelcie is scared to tell Ash about the baby. Besides having major feelings for him, he was always so drunk, she was trying to catch him sober. So until she can tell him the right way, she avoids him.

“Asher is the one man who makes me insane…with unleashed desire.
And the worst part? He’s Zeke Cooper’s brother–and the uncle to my unborn child.

Meanwhile, Dee keeps setting Chelcie up on blind dates. Ha! These were awesome! I was reading this in a hotel room at 3am with my family and woke them all up with a snorting laugh.  But even more, I love Asher’s Alpha reaction.

“A red-hazed fury chanting at me to kill. I wanted to rip his arms off his body and beat him with the hands that dared to touch WHAT. IS. MINE.”

And once Asher claimed Chelcie, he wasn’t letting her go.

“Sunshine, once I take you- make you mine- I won’t ever let you go. You’re mine, baby. This body, this heart, and damn sure this pussy. I won’t take you until I know you understand what I’m saying to you.”

Sure, easy to say when he doesn’t know she is carrying his brother’s baby!

When they finally really do connect, it’s like BAM, a switch is flipped and they are perfect.

“He has Axel’s protectiveness without being over the top. If what Melissa tells us is correct, he shares Greg’s bedroom skills. He has that huge heart of gold that Beck is famous for.  And of course, he shares Maddox’s strength and determination.”

I love why he calls Chelcie “Sunshine”:

“I’ve been stuck in this fog, this darkness that’s held me captive…This black hole of grief that I couldn’t escape. But then you came into my life…you were my light when there was none to be found.”

“Sway, My vagina broke the happiness!”

I absolutely loved Cooper. I would just have loved to see a little more relationship development happen between Asher and Chelcie to warrant the love and faith they had in each other, but still, I loved the crap out of everything in this book, I just wanted a little more–it was a pretty quick read. I have so many amazing quotes and they were just such a healthy couple when they finally got together, it was a pleasure to read. Maddox and Emmy played an important part in this book, and I just can’t wait to get my hands on their book!

“You make sure and keep that damn light shining bright on him. You give a broken man like me hope that there might be something to be said about trusting that blaze that fights a man’s demons.” ~Maddox

US only
a Rafflecopter giveaway