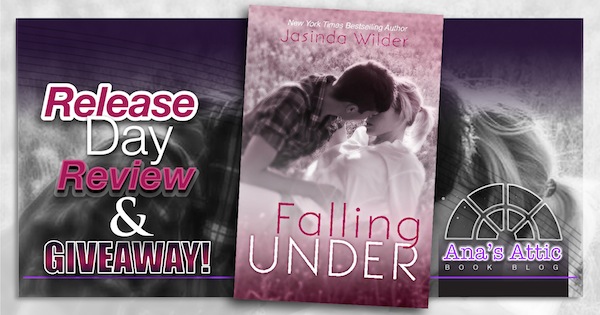 Falling Under by Jasinda Wilder

3rd in a series of Standalones. NewAdult with lots of sex.

SURPRISE!!! It’s another Falling Book from Jasinda Wilder! Usually I like to know that another book in a series is coming out because my memory sucks so bad I like to re-read the books before it. I didn’t have the chance to do that before reading Falling Under, and that is OK, everything will be explained.

I don’t like to read too many NA books, I have a hard time reading about teen sex when my child is that age. But Jasinda can weave a tale so magical that you always know that the kids are in love, and it just seems…right. These aren’t just any kids in this book though…this one is interesting. It’s in the future, yet not. It’s about Kylie, the only child of Nell and Colton from Falling into You. They live across the street from best friends Becca and Jason from Falling Into Us and their son, Ben, in an upscale Nashville neighborhood. While it isn’t really necessary to read the first two books in the series, READ THEM, because they are awesome. Both were on my Best of 2013 list.

This story is Oz’s story. It’s Colt’s story. But mostly it’s 17 year old Kylie’s story told from Oz and Colt’s point of view, which made it pretty unique, because as I review this, I almost forgot it wasn’t in Kylie’s voice at all. And I never missed it.

Oz is a ‘bad boy’. Long hair, metalhead, motorcycle, tattoos, smoker, fighter, and he lives in the wrong part of town. He knows nothing about his father and isn’t close with his mom, but at 21 he just lives with his mom to help her with bills. He’s moved so often in his life that he never set down roots, or made any friends. But right away, you see beyond that. He’s smart, maybe a math genius. And when he sees Kylie in one of his classes, his reaction shocks him.

“I can’t take my eyes off her. I’m mesmerized…I’ve never had my pulse race and thunder in my ears, never had my palms sweat. Never wanted to stand up, cross the room and beg for her name, her number, for five fucking minutes alone with her.”

Kylie approaches him after class, and minutes later, she’s riding away on the back of his bike. Kylie is a good girl. A virgin. She grew up happy, and had a great relationship with her successful musician parents, Nell and Colt, and has a good, strong head on her shoulders. But immediately, there is something between them.

“I shouldn’t be doing this, shouldn’t be acting like this chick could ever mean anything to me, or I to her”
“She’s a good girl with a future. I’m a bad boy with none. Too bad I’m an idiot who never pays attention to warning signs.”

As for Colt, he’s looking out for his little girl, and he is a great dad. He trusts his daughter to make smart decisions and despite his reservations, he lets her.

“I see something in this kid, something I recognize. And it scares me that she’s interested in him.”

When Kylie wants to enter her first open mike night without her parent’s help, she needed a guitarist. And though Oz only plays metal, she charms him into trying her music, and a duet was born.

“Singing and playing acoustic guitar like some coffeehouse hipster dick? Yeah, no.”

This was totally against Oz’s personality, but he couldn’t say no to Kylie. But Kylie wanted more…she wanted Oz, but he didn’t want to sully her with his life.

“My life ain’t pretty, sweetness. I wouldn’t be doing you any favors by dragging you through the mud of my messy-ass life. You’d get dirty, and you’re way too clean, way too gorgeous, and way too innocent for me to be willing to soil you like that.”

Jasinda has once again created a beautiful young love story. When I finished the book, I hugged it and thought “this is why I love to read!”

**NOTE: Book ends at 89% and there is a nice long juicy preview for Jasinda’s next book, Alpha.

I loved everything about Falling Under, so in some ways it’s a 5 star read, but it just wasn’t EPIC. It was sweet, it was wonderful, and I loved it. But I have come to expect Jasinda’s heart-ripping emotion. This story just may not stick with me the way Falling into You did. It felt safe, and happy. There was an uplifting feel to the whole book, and I loved it all the way through. Perhaps if it wasn’t Jasinda I would have rated it higher, but my expectations of Jasinda ‘going there’ where other authors won’t go wasn’t really satisfied. Falling Under was just a wonderful, sweet, good-girl falls for bad-boy story and I truly loved every word of it. In fact, I think when I finished, my thought was “5 stars” but then I read the preview at the end for her next book, Alpha, and thought…”Holy Shit, I NEED more NOW!” Alpha already looks like a 5 star read to me.

“It shouldn’t be me, but it is. I’m just a hood rat, a metal kid, a pot-smoking fighter, the kid who’s been to juvie and psych wards, who’s been suspended more times than I can ever count, expelled once, beaten up countless times, shot, nearly stabbed once, left for dead in a parking lot, fatherless, friendless, homeless, rootless. How could I possibly deserve to have this glorious pale-skinned fire-haired, lightning-eyed beauty, this goddess?”