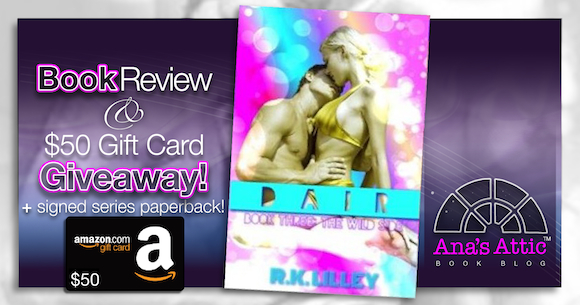 Dair (The Wild Side 3) by RK Lilley

Romantic Suspense. 3rd and final in a novella trilogy. Does not stand alone.

Wow, what a book! What a series! What a ride! RK Lilley is one of my favorite authors. I love her alpha men. I don’t usually like cliffhanger/serial type books, but it’s R.K. for goodness sake! So I took a chance, and actually loved the 3-part format to The Wild Side Series. It totally worked.

THIS BOOK DOES NOT STAND ALONE!!!! You MUST read TheWild Side and Iris first! See my reviews here and here.

Dair–well he’s Alpha–sometimes, and other times he’s led by his dick, and completely pussy whipped. But I totally loved him and rooted for his happiness. The problem was, I wasn’t sure what that happiness was! Iris? Iris was a rush–pure sex, perfectly tailored for him, but a complete mystery. She has had Dair tied up in knots with her disappearing act for months. Lourdes? Well she is perfect for him, but he is so wrapped up in Iris, he couldn’t look beyond it.

After book two, we were left with more questions than answers. I thought I knew something, then went back and read it a few times, and thought not. Then when I did a quick re-read of Iris before Dair, the same thing stuck in my head. An inkling was there–but I couldn’t figure it out. Throughout Dair, as the pieces started coming together, I was happy to see I had put a lot of them together, but doubted myself. Still, I don’t think anyone could fully figure it all out.

Dair begins with him having reason to believe that Iris is dead.

“Iris had been gone for two months and counting.
It had been a rough two months.
Two months of longing and mourning.
Two months of denying and grieving.
How perverse was it to realize just how in love you were with a near stranger only after finding out that she was gone forever? Possibly dead. Probably dead.”

He’s trying to move on, but it’s not happening. He can’t stop thinking of her. Some hope lingers.

“How could you be in love with a person who you didn’t really know? Someone that fed you nothing but lies?
Someone you knew with certainty you couldn’t trust?”
“…in the end, everything was out of my control, including my own heart.”

I am not going to say any more about the story line, you have to watch it unfold yourself. I will tell you this. The ending totally worked for me, and I’m really happy with it!

Dair was a great conclusion to The Wild Side Series. I love the way it was wrapped up, I love the way RK kept you guessing until the end.  I REALLY, REALLY would love to see another story in this series from Iris’s POV, which would round it from a 4.75 to maybe even a 5++ stars. I need to love the female in my books, and I didn’t get there with with this series. I still never really felt like I knew or understood her. She was very immature in a lot of ways, yet you can tell she is smart. Oh how I’d love to get in her head!

“My love for you is the realest thing I know. I’d like for you to remember that.”

The Wild Side Series, as it is though, is still a great edge of your seat, sexy mystery. I completely recommend it for a very different read. It’s unique, being told completely from the male POV, and I understand if RK wants to leave it like that. It’s a full story with an amazing epilogue. I just want a little more. I’m greedy like that. 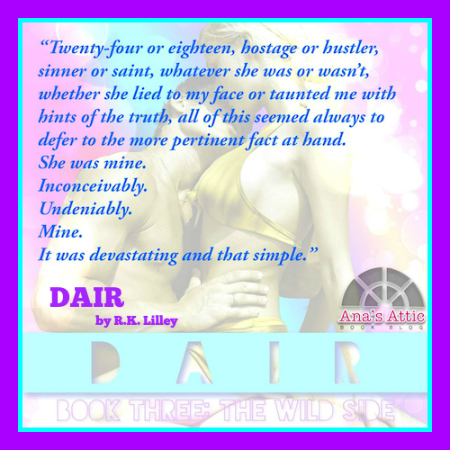 The Wilde Side SERIES RATING:

Purchase Dair (The Wild Side 3) by RK Lilley 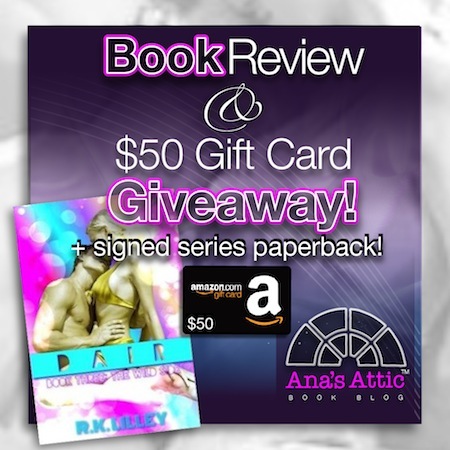 Win a $50 Amazon card and a paperback of all three books months before the release! 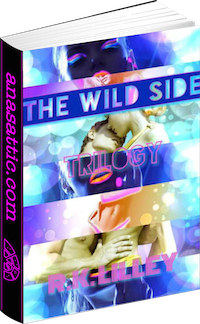