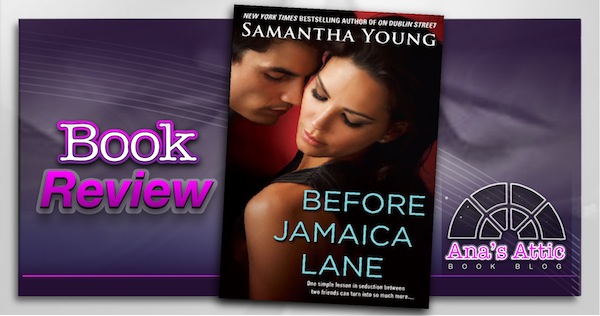 Before Jamaica Lane (On Dublin Street 3) by Samantha Young

The On Dublin Street Series by Samantha Young has been a favorite of mine since I read the first one, On Dublin Street, in 2012 (see my review). The story stands alone, and the others are about side characters from the first book. On Dublin Street is still one of my highly recommended books. Since then, we have had Until Fountain Bridge (novella, my review), Down London Road (my review), Castle Hill (novella, my review), Before Jamaica Lane, and coming next week, Fall from India Place. This was the 3rd full length book in the series, and the 4th couple. I do suggest you read Castle Hill before this book, because there is some overlapping of scenes.

I must admit, I haven’t loved any of the books as much as the first, but I still love the series. My problem with each book though, is my memory. I feel like I really don’t remember enough, especially in Before Jamaica Lane, I found myself floundering, trying to catch up and remember who was who for the first 20%. I honestly just couldn’t even remember who Olivia, the heroine was. But once I felt like I knew and remembered everyone…BAM. Loved it. Before Jamaica Lane was sweet, funny, sexy, and one of those books you just smile through. My favorite kind.

Olivia was one of my favorite book heroines. She was funny, a little nerdy, and oh-so-relatable.

“Saddened that I, a smart, semi-funny, nutty, loyal, good woman, could feel so negative about myself under all the smiling and humor, I felt the sting of tears in my eyes. The way I felt about my appearance was bad. Really freakin’ bad.”

Olivia is a librarian, and with very little experience, she finds herself painfully shy around the opposite sex. Except around her best friend Nate. Though she has a secret crush on Nate, Liv doesn’t really think of him like that because she knows the manwhore is totally out of her league, and she accepted that they could only be friends a long time ago. So there is nice football player, Ben, who keeps coming by the library.

“There’s a guy at the library. A student. Postgrad. I like him, but I sound like Rain Man every time I try to talk to him.”  “I’m going to die alone, Nate.”
And as unconsciousness pulled me toward it, I thought I heard him whisper, “Not on my watch, babe.”

Since Nate has tons of experience, and Olivia has next to none, he offers to help her.

“I know sex. You don’t. I’m going to teach you.”
“… Friends are important to me, Liv. And last night a friend cried in my arms and admitted she was unhappy.” He brushed my cheek affectionately. “You deserve happiness, babe. What’s the harm in letting me help you to try to obtain it?”

The lessons begin with Olivia’s confidence.

“Let’s start with how you don’t feel sexually attractive.”
I gulped. “All right.”
“Are you fucking kidding me?”

As he caressed her butt, he explained about her supposed “fat arse”

“Not fat…Curvy. And I’ll let you in on a wee secret: there are still men out there that like a woman to be soft under their hands, to have curves, hips, tits and arse.”
He tapped my butt gently with the palm of his hand. “It’s a good arse, babe. I don’t want to hear you refer to it as anything else”

In fact, he really helped her confidence.

“If you were just some woman in a bar, I’d pick you out from all the others, take you home, and fuck you so hard you wouldn’t be able to walk straight in the morning.”I gulped.In fact, I think I might have had a little mini-orgasm.”

As the lessons got sexier, the friendship lines began to blur.

“So lets get this straight. You want me to fuck you in order to teach you how to fuck another guy?”

And blur even further. But Nate was not a guy who could fall in love. His love was already taken, and lucky for Olivia, she had enough confidence in herself to know not to settle.

“I didn’t just want Nate to love me. I wanted him to love me the way I loved him. The kind of love that’s so big it would last beyond a lifetime.”

“What would you prefer? Life in a maximum-security prison or trapped in Jurassic Park?”“Do I have a social standing in this prison?”“No. You’re just an average Joe.”“Then I guess I have to go with Jurassic Park.”“Why?”“Well, I’ll have constant fresh air, for a start, and also if I’m going to be anyone’s prey, I’m going to be the prey of an animal that’s acting out of instinct rather than psychopathy.”
“Good answer, babe. As always.”
“You?”
He shrugged casually. “If you’re in Jurassic Park, I’m in Jurassic Park.”

Before Jamaica Lane’s actual storyline was closer to a 5 star read, despite using a very common trope. What held me back from the 5 star rating was too much of the side stories without enough cues and reminders as to who the characters are. This forced the book from a standalone entry into the series to one that doesn’t quite do as well alone. I am just finding there are a few too many side characters and story to keep track of, and as each one gets their own book, I am kind of surprised because they weren’t big players in the original story. Still, I will continue with this series, though I will admit a little trepidation towards Fall from India Place (releasing June 3rd) because of the young characters.

Have you read this series? What are your thoughts?