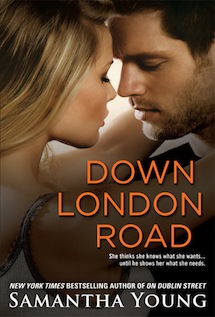 Down London Road is the second full-length book in the On Dublin Street Series. I have to tell you, On Dublin Street was one of my favorite books of 2012 so I had super high expectations for this. I re-read On Dublin Street before reading this, which was not necessary at all, but still, I loved it just as much the second time. In fact, Down London Road can stand on it’s own, but why??? Reading On Dublin Street first will make this a much richer story because Joss and Braden are in it a lot. Plus, ODS was amazing, and there is no way you should skip it. (See my review) **This review (as all of my reviews) may seem spoilery, but with the exception of a few quotes to enhance, it doesn’t give more than the blurb**

I didn’t realize that Down London Road was about a bit character who wasn’t really very likable in the first book. Johanna (Jo) was the beautiful girl who worked with Joss at the bar and came off as a bit of a money grubbing whore. But this book begins months after On Dublin Street ended, and Joss has gotten to know Jo better.

24 year old Jo has been the sole provider and caretaker to her 14 year old brother and nasty bedridden drunk mother for years. She had to drop out of school at 16 and get two jobs to do it. Her abusive father is out of the picture, but not before destroying any shred of self-esteem the young girl had. Cole, her younger brother, is all she cares about, and she is a great “mother” to him. Jo dates wealthy men who can provide a sense of security for her and Cole, but not without really liking the men. She never takes advantage or asks for anything. She feels her only skill is being a good girlfriend, so she covers up all of her needs and wants, and parts of her personality and life in order to be the perfect girlfriend to her boyfriends.

She has been dating the sweet older millionaire, Malcolm for  quite some time, but she has never really let him see the real Jo. When she and Malcolm attend attend a gallery art opening, BAM. She sees the tattooed, ripped jeans, sexy as fuck Cam across the room:

“Our eyes met, and for some absolutely bizarre reason the connection felt physical, like acknowledging each other’s presence had actually locked me in place. I felt my heart rate pick up, blood rushing to my ears”

But he was a total fuckwad to her, judging her after seeing her with Malcom without knowing a damn thing about her.

“Well, I guess that makes us a pair. I’m a brainless, morally corrupt, money-grabbing bimbo and you’re a jumped-up pretentious artsyfartsy know-it-all dickhead.”

Despite his treatment of her, Jo has a good heart. Cam needed a job, and she got him one at the bar. Holy crap, the sexual tension between the two of them was HUGE.

I’d never felt so intensely attracted to someone before. Usually, it took me a while to get to know a guy before I felt that kind of deep tingling in all of my good-for-nothing places.

Then, coincidentally, Cam rents the apartment beneath Jo. There is no more hiding what is really going on in her life. He becomes friends with Cole, (Jo’s brother) and also begins a close friendship with Jo.

“ All I do know is that I’ve never treated anyone the way I’ve treated you, and I’ve never met anyone who deserved it less. I like you, Jo. And whether you want to admit it or not, you need a friend.”

“You and I are starting over today. I’m not some asshole who has judged you over and over again and got you wrong every single time. Trust me. Please.”

For the first half of the book they are both dating others and developing a great friendship. Until they couldn’t deny the attraction anymore.

“Hush.” His breath whispered against my lips and he lowered his hands until they circled my waist. “You feel this too. You’ve felt it since the night we met.”

Luckily, they broke up with their significant others (barely) before they actually started something.

“What I feel for you…it’s all consuming. It’s debilitating. It’s too much. It’s…I can’t even describe it, but being with you is…there’s this intensity inside me all the time. This…constant pull, desperation…it’s like you’re branded on me or something. And it bloody well burns.”

Cameron MacCabe. You charmer, you. You’re changing my life.

And when they started, whew! They burned up the dressing rooms, walls, and more. Samantha know how to write sex!

“I’m going to fuck you so hard, sink so deep inside of you, you’ll never work me out from under your skin. Never.”

She also knows how to write character growth. Jo changed so much in this book. She finally began to let down some of her defenses and let Cam, Joss and Braden’s family become her own family and give her the confidence needed to better herself.

“No one had ever told me I was smart or talented or brave, or that I deserved more than what I’d asked for.”

Though I wasn’t a huge fan of Jo, and really didn’t like Cam at the beginning of this story, I eventually fell for both. There were a TON of amazing quotes to chooses from, hot sex, great romance, angst, action and tons of character growth. On Dublin Street was one of my favorite books last year, so it would have been really hard to top it. While this didn’t quite top the 5++ star read, I still absolutely loved it and read it in one day. Couldn’t put it down!

“I love to fuck you,” he whispered in my ear, his voice gravelly with emotion. “But I love to love you, too.”

My Review of On Dublin Street

My Review of Until Fountain Bridge