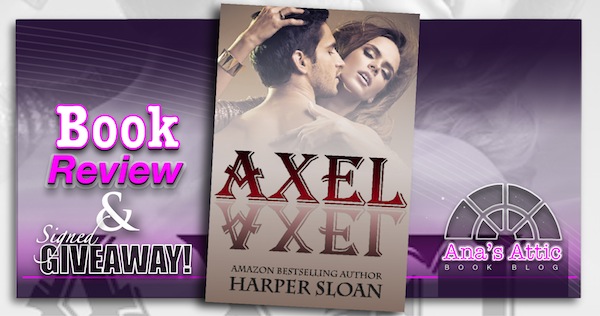 I knew right when I saw Axel by Harper Sloan last year that it was right up my alley. But for some reason I just never got to it. When it went on sale for 99¢ I went to grab it up but realized I had it. (What else is new?)  Since Harper Sloan will be at Wicked Book Weekend, I knew I wanted to read Axel before. Then, one of my most loyal readers (I think it was Megan, but could be Scheva) said it was very Kristen Ashley-like, I moved it right up to the top. I was craving some badass alpha male.

Axel is everything I love in a book. Everything. A badass alpha, a couple with a history, great friends, laughter, heartbreak, tons of love, great sex, an awesome heroine, some action with a bad guy, and a cast of characters that I adore. Seriously like it was written for me.

The prologue had me hooked and already on the edge of my seat. Isabelle’s husband is a total abusive dick. When she sneaks out to meet her best friend Denise, he catches her and beats her within an inch of her life.

“Cut off from those I loved and so terrified of his wrath; I wasn’t going anywhere. Those were the years I prayed and prayed for Axel to find his way back to me… but I eventually had to face the facts… my hero was gone.”

She was so in love as a teen. Axel, her high school sweetheart, was her future. They were everything to each other and would have been married after basic training.

“It will be over before you know it and I’ll be back to get my girl…
“You promise to come back to me?”…
“Just try and keep me away.”

Izzy never healed after Axel went into the Marines and never returned. Two weeks after he shipped out, Izzy’s parents died, and she had to move away to live with her grandparents, but never stopped writing to her love, Axel. Until one day, a letter was returned from his foster mom saying he was dead. Broken and alone, after a few years, Brandon the asshole was there for her, gradually cutting her off from everyone, marrying her, then eventually abusing her.

Flash Forward 2 years after that last beating, 12 years after Axel’s ‘death’.  Izzy is healing, but still completely broken. She’s waiting for the asshole to sign divorce papers, while hiding from him with her best friend and huge support Dee (Denise), and the hot-as-hell badass who is a big brother and BFF rolled into one, Greg Cage.

They are as much of a family as you could be without a blood relationship, but even better because they are best friends. Greg and Dee look out for Isabelle who is basically shattered to pieces. Greg…sigh…wow, he is so amazing with her. I love how he called her ‘baby girl’ despite the overuse. And Dee is always there for her with a big, bright cheerful presence, she up and moved her whole business to take care of her BFF. I loved her character.

“Hey you sexy bitch, I see you decided to rock the birthday suit today. Nice choice, although, we might have some issues getting into the mall like that. I think there might be some laws against this. But, hey, more power to you!” She smacks my ass on the way over to park it on my bed.

Brandon fighting the divorce for so long concerns Greg, part of a very successful security company. So he brings in the rest of his Marine buddies to help out his girl. All of them are huge and gorgeous, and as Izzy meets and drools on them all, she finally gets to the last of the bunch.

“I look back up and meet the most stunning green eyes I have ever seen. Eyes I have seen before. Eyes I have spent hours gazing into. Loving and planning. Eyes I have been mourning for the last twelve years.”

“This girl ripped my heart to fucking shreds and I never knew why. It would have been quicker if she had stuck around and shot me in the fucking chest. At least I would have died instantly, instead of bleeding out slowly for the last twelve years. “

“You really think that once I bury myself deep within your pussy and feel your tight walls squeezing the come right out of my dick, that I will ever want to let you go again? You must be out of your fucking mind, Princess. I won’t even be able to let you out of my fucking bed until we make up for every single day we have lost.” 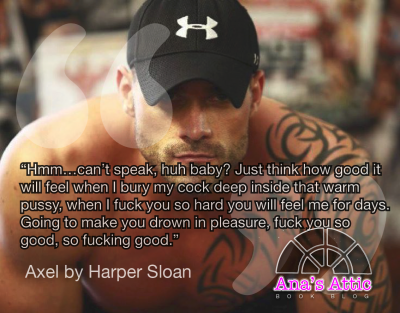 And he did. Honestly, for most of the book, this was a 4.5 star read. I loved it, but there was enough that I didn’t love. But then the epilogue. And the tears that rolled down my face….I hugged my kindle at the end. Literally hugged it. 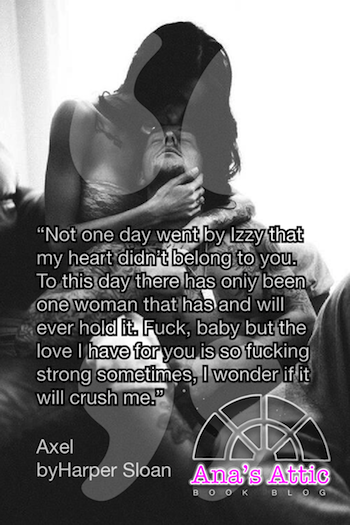 Rating: 5 Stars 4.5 Heat (Really runs between a 4.5-5, but I’m going with my immediate thought when I finished the book.)

I’m hesitant to give this 5 stars, because I have a feeling the rest of the series will be even better. This was a debut book! I have both Cage and Beck on my Kindle ready to go, and I can’t wait to read them, because if Axel was so great, the next two must be phenomenal. Harper did an amazing job with this book. Any author that brings me to happy tears, deserves 5 stars in my book.