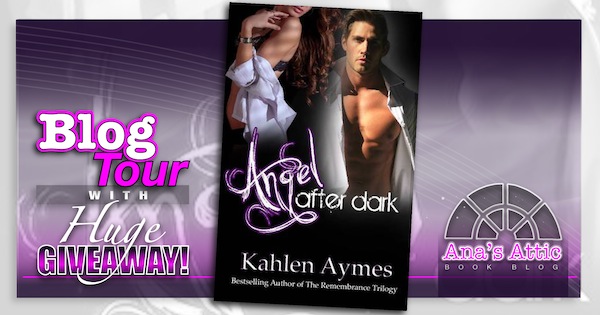 Angel After Dark by Kahlen Aymes

1st in a series. Adult Contemporary

Dr. Angeline Hemming is a beautiful, sassy, no-nonsense type of girl who has risen from a difficult past to become one of Chicago’s most successful and respected criminal profilers. In exchange for free commercials to promote her favorite charitable causes, Angel answers calls and gives relationship advice on a Friday night radio program.

Alexander Avery is a gorgeous and successful corporate genius who doesn’t believe in love. When his girlfriend-of-convenience calls into Angel’s program, he is furious with the show’s host who doles out (what he considers) blind advice, without knowing all the facts… and he decides to give her a piece of his mind, and his side of the story!

When Angel informs Alex he’s the one in need of a much-deserved lesson, all hell breaks loose as these two type-A personalities battle it out for control over minds and hearts, and yes, in bed. Not only are they fighting each other at every turn, but they are also struggling to uphold the convictions they each live by.

It’s unclear who is stronger, but both must discover that to get what they desperately want, they may have to give a little… or a lot.

Angel After Dark by Kahlen Aymes Teaser Trailer from Heather Maven on Vimeo.

Angel After Dark by Kahlen Aymes was a very unique read. Angel is a very strong character and the voice of a late-night radio show about relationships. Her day job is a very stressful one, psychological criminal profiling. It was a pleasure to read about this strong, independent, super smart woman.

Alex is absolutely gorgeous and successful and can have any woman he wants. He isn’t a man-whore, but he goes from one long-term fuck buddy to another, never letting his heart get involved.

When the two spot each other at a Home Depot, sparks fly, but they never make a connection. Alex’s best friend Darian is a radio producer who just happens to run the late-night talk show that Angel hosts. Darian has been teasing Alex about this gorgeous woman he has working there, but Alex takes no interest until he finds out that his current fuck buddy called the show, and Angel gave her advice to dump him. When Alex finally listens to the show and gets a partial picture of Angel, his curiosity is more than piqued.

“Alex was stimulated beyond belief, vowing that after they met, if he wanted her, he’d have her. She fascinated him in many ways. She was beautiful from what he’d seen, but it was her intellect and sense of humor that drove his desire. He wanted to know if she was as sexy as she sounded; if the incredible confidence she exuded would carry over into the bedroom. His dick twitched at the thought.”

When they finally meet officially, boom! the sparks fly, as well as the banter.

“The pull between them was tangible and she was certain that if the eye contact and body language was anything to go on, Alex felt every bit as strongly as she did.”

I liked that there was no rush in this book, in fact, the first date isn’t until about the 50% mark. But you sure feel the build up. Sidenote here…I loved Becca, Angel’s best friend.

“I bet his, uh,  junk is effing perfect, too. Mmmmmmmmm.”
“It’s likely he’s a sex god. I bet he makes women come just by breathing on them.”
“The man’s a genius and he’s gorge. Now if his peen measures up, I’ll have to kill myself.”

Angel is afraid to feel too much and get hurt. Alex has a reputation, and he never lets women get close. So despite her growing feelings, she holds back to protect her heart. But Alex won’t let her.  When she mentions she is afraid to turn into his ex, he makes it clear she is so much more.

“You’re nothing like her. I didn’t give her a second thought. But you? You’re all I fucking think about! Everything I never knew I wanted.”

They keep fighting their feelings, knowing that if they let themselves, they might lose themselves. But they can’t help it.

“I am completely out of control with you. I’m lost somewhere in your eyes, your arms, your body, your mind. Lost.”

“What happens when I give to you? Or when I take from you? Will you consume me body and soul? I can’t escape you.”

When danger comes knocking, it was such a pleasure to see a woman who is so strong immediately ask for help instead of trying to go it alone.

I really enjoyed Angel After Dark. There was a totally hot as hell alpha, a smart, independent heroine, tons of banter, great comic relief, and some danger and excitement thrown in. These are all the things I love in a book. I look forward to reading more from Kahlen.

Amazon Bestselling Author, Kahlen is an award-winning author of sizzling hot, deeply moving contemporary romance. Her stories are filled with intense love, passion, angst and emotion that breathes life into her characters and leaves her readers captivated. She lives near Omaha, Nebraska with her daughter, Olivia and their three dogs. Creative by nature, she enjoys the arts, music and theater… But the love of her life is writing!