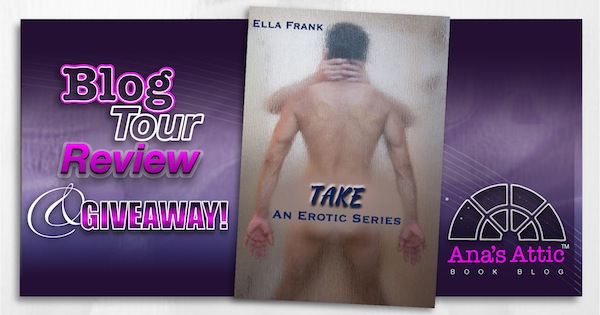 (but you can read Try (book 1) as a standalone

TAKE – verb: to reach for and hold in one’s hands or get into one’s possession, power or control.

Logan Mitchell is a man who’s always been more than happy to take what he wants. It’s a philosophy that’s proven lucrative in both his business and personal life, and never was it more apparent than the night he laid eyes on Tate Morrison. After pulling out all the stops and convincing the sexy bartender to give him a try—he’s hooked.

Now, Logan finds himself in a predicament that demands more from him than a smart-ass answer and his innate ability to walk away when things get too deep.

He has a choice to make, and it’ll force him to do something he’s never done before—take a chance.

Tate Morrison knows all about taking a chance. He took the biggest one of his life the night he showed up at Logan’s apartment to explore his unexpected reaction to the man.

Ever since then, he’s thought about little else.

At first he was convinced his attraction was based solely on his body’s curiosity. But the more time he spends with the silver-tongued lawyer, the more Tate realizes that their physical chemistry is only the beginning.

He’s starting to catch a glimpse of what life with Logan would be like, and it’s one full of excitement and satisfaction—a far cry from what he had in the past with his soon to be ex-wife.

Each man will face their fears as they begin to understand the true meaning of give and take. Their feelings for one another will be tested, as will their very beliefs. But now that they’ve found love where they least expected it, will they be brave enough to reach out and take it?

I am not usually a m/m fan but Ella Frank changed my mind with Try. In fact, it was one of my favorite books of 2013. Ella is the queen of hot and sexy banter, and Try had a ton. Take is the second in the trilogy, and it leaves off just where Try ended. As with many second books in a trilogy, this is more about the couple settling in and working on their fears and hang-ups than it is about the initial flirting and coming together. Ella tells an amazing story, and you will fall even more in love with Logan and Tate.

I must say though, that I think Take is a little more suited to the typical m/m fan than Try was, and despite it being well written, and me really liking where the story went, I will admit, it didn’t quite do it for me the way Try did. I do think that many of the m/m fans who wanted a deeper love story and connection will love this next book in the series, but those that, (like their “gay for you” counterparts) only enjoyed Try because of Ella’s writing, the banter, and the taboo gay-for-you storyline may find Take to be a little too much.

“I want you inside me”
“If that’s what you want…” Logan let out a shaky exhale when Tate’s fingers found him and surrounded his length.
“It’s what I need.”

“Lust and arousal were the driving forces in the room, but just under the surface was something much stronger–something he wasn’t sure they were ready to acknowledge.”

This is all new to Tate. He knows he feels strongly for Logan, but doesn’t know who he is. Weeks before, he was straight. now, was he gay? He only wanted Logan.

“Logan had fundamentally changed him, made him see the light–or the fucking stars–and there was no way he could ever be unchanged. “

While Logan may have been the aggressor in the beginning, Tate has no problem taking over.

“What are you trying to do, Kill me?”
Tate shook his head. No. I’m making you mine.”
Logan released his hard-on and grabbed Tate’s ass, pulling him up so he could rub their cocks together. “Don’t you know? Im already yours.”

Logan has no qualms about being with a man at public functions or work functions. Having been burned once before by a lover who wouldn’t acknowledge him in public, he is scared to let himself go for fear the same this would happen. Tate is struggling with telling his parents, who he was very close to.

All he’d once dreamed of was right there within reach. All he had to do was reach out and take it.

I must say, in many ways the sex was even hotter in Take than Try, but for some reason didn’t do as much for me personally..

“Get in the car and unzip your jeans. I’m fucking hungry.”

“You only have to do one thing.” Logan told him as he continued moving the hand burrowed between Tate’s legs. “I’m going to suck you and fuck you until you come. Your only job? Don’t make a mess in my car. Keep it right here, in my mouth. Got it?”

Take was a second book in a trilogy. Often second books, for me, suffer from many of the same things as this did. Beyond the initial chase and banter, the actual emotions and angst in book 2 just seem a little tame in comparison. What I love most about Ella’s writing is her banter. While there was definitely a good amount, it wasn’t as much in Take as Try.Still, I love Tate and Logan, and look very forward to reading more about them. 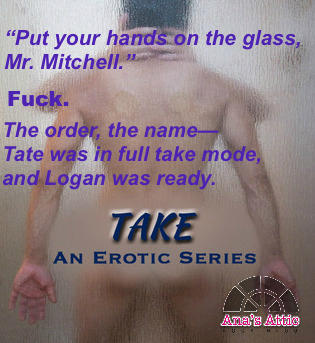 “So what?” Logan challenged as he pulled his keys from his pocket.

“Excuse me. I’ll have you know I was driving this baby all through college and she still runs like a dream.”

Tate watched as Logan walked over to run his hand over the scratched-up tailgate, and he was amazed that he even made that look sexy. Like he was stroking a lover.

Now around at the passenger’s side, Logan opened the door and looked at him over the bed of the truck. “Yeah. Jealous?”

Laughing, Tate walked over to where Logan stood with a hand on the door and kissed him slowly on the mouth.

Logan stepped forward, crowding him back against the inside frame of the vehicle. “You’re not ready for the or else…”

The minute she began her love affair with reading, she became and avid supporter of the romance genre and has never looked back.

Ella is Australian born and bred but currently resides in Houston, Texas with her husband.

1st) Taste of Chicago Gift Package (US ONLY)