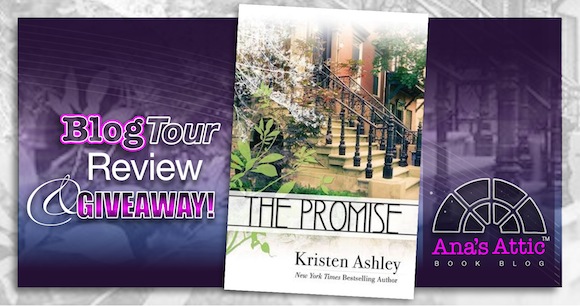 The Promise (The Burg Series #5) by Kristen Ashley

Adult contemporary. Recommend you read at least the first 2 in the Burg Series first.

I read At Peace (The Burg Series #2) in 2011. I remembered Vi and Cal and the girls, but did not remember Frankie and Benny, so I decided to do a full re-read before diving into The Promise by Kristen Ashley. Though I don’t think I had to, I am SO GLAD I did. The Promise and At Peace are closely tied together, and I think having all of the details fresh made The Promise a much richer experience. And I have to tell you–it’s old-school Kristen Ashley. The Promise fits perfectly in with the rest of the series. It feels the same. All of Kristen’s descriptive deliciousness is there in 500+ magical pages.

First, I need to say, At Peace was even better the second time around. Since I never did a full review because I read it before I started blogging, I will tell you it was a 5+++ star read, and one of my all time favorites (along with Games of the Heart in this series).

The Promise begins right where At Peace ended (though there are 2 books after At Peace, chronologically, this comes next or at least runs simultaneous). Frankie and Benny appear at the end of At Peace and The Promise begins with Frankie in the hospital recovering from a gunshot wound.  Frankie (Francesca) comes from a wild and neglectful family with a mom who goes through more men than underwear. Just the opposite, Frankie has had one love, and he was murdered 7 years prior. Having no real family who cared, Frankie had loved and been a big part of her boyfriend’s family, but they held her indirectly responsible for his downfall that led to his death–or maybe it was just too hard to see her.

So for seven years, they cut her out, and Francesca just existed. But as soon as she was shot helping one of their own, that family was right back in there, admitting they were wrong.

Benny–swoon, I love him!!! Reading this book just made me keep running and hugging my husband. I totally have my own Benny. Hot-headed, possessive, protective, can fix anything Italian. Benny runs one of the most famous pizza places in Chicago, passed down from his dad. He’s always had a bond with Frankie. There was always something there. But she was his brother’s girl. Soon after Vinnie’s death, Frankie came to Benny and made a pass at him in her drunken grief. And they hadn’t spoken since. But for those 7 years, he know she was there–it just took her getting shot for him to wise up.

And he wises up the way a Kristen Ashley alpha male does it–forcing his way in.

“I’m not takin’ you home. I’m takin’ you to MY home,” he clarified.
I blinked. I stared. I totally forgot about how cool his sunglasses looked.
Then I lost my mind.
“I’m not goin’ to your house!” I shouted.
“Yeah you are”

Frankie is flash. Big hair, heavy makeup, takes forever to get ready. But she’s heart. She cares big, loves big. Because of the family she was brought up with, she never learned to love herself, so she never found herself deserving Benny or his family’s love. But Benny let her know right away where he stood. No more games.

But Frankie, being Frankie, doesn’t roll over for him. She’s drama, she’s stubborn, and that’s just what Benny likes about her.

There was so much love and family and humor and honesty in this book, it’s everything I could ever want in my stories. I giggled a lot, I had a few times where I read with touched tears rolling down my face, and a few more where I openly bawled. The core of FAMILY is very strong in this series, and this story just shows that family isn’t always blood.

“This was life. This was family. This messy, strange, awkward, crazy conglomeration of people that totally fit when they shouldn’t.”

Benny was so honest and upfront. I loved how he just laid it all out there.

Let me tell you, Benny was pretty hot in the bedroom as well. He was the whole package.

“Because you’re everything a man should be.”

Kristen Ashley has done it again. She has written another epic book filled with love, laughter, pure alpha hotness, amazing family and friends, a full, rich story with some excitement, and amazing romance. I couldn’t have wished for a better story for Frankie and Benny, it was everything I want in any book I read and more. To borrow a quote from The Promise:

“Been waitin’ years for this, baby. Thanks for makin’ it worth the wait.” 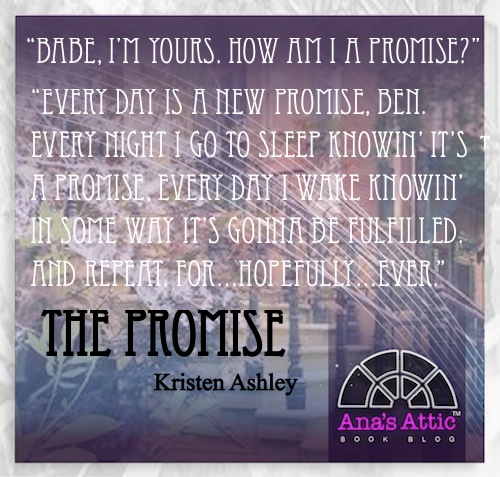 Purchase The Promise by Kristen Ashley