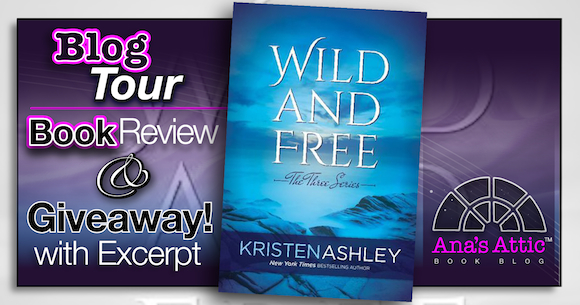 Wild and Free (The Three Series #3)

Paranormal Romance. Though the story can stand alone, you need to read the first two for full enjoyment.

If you follow my blog at all, you know my absolute love for all things Kristen Ashley. I had saved her paranormal books so I would have something different to read that I know could pull me out of any slump. So over the holidays, I read all three in the Three Series in a row. I loved Until the Sun Falls from the Sky (my review), and loved With Everything I Am even more (my review). So I couldn’t wait to finish the series. It was a crazy busy holiday, and Wild and Free took me a really long time to read, which is not the norm for a Kristen Ashley book. Not because I didn’t like it, but it was long, and there were a few parts later in the book that got a bit draggy for me. Still, overall, I loved it and I am pleased with the end to the series (though I would love a book about Hooker!)

Delilah Johnson is a biker bitch. She grew up the daughter of an MC club president. She has spent her life with a strange pain in her soul. A burning that just wouldn’t go away and no doctors could cure. Abel Jin is a hybrid vampire/werewolf who has lived a few centuries without knowing there may be others like him in the world. Centuries spent with generations of the same Chinese family who found him in an alley, and watching each generation pass away. He grew up thinking he was a monster, and this part of Abel really made me fall for him.

Delilah felt the need to relocate to a biker town, and followed her gut. But when she is attacked in an alley, Abel was drawn to her and rescues her.

One thing unique about this book vs. pretty much all of Kristen’s other books: when the couple found each other, they BOTH knew it. Lilah’s life-long pain is gone.

Feel it. And you know exactly what I’m talking about. When you feel it. you’ll know this shit isn’t crazy. This shit is something else. I don’t know what the fuck it is. I just know you’re not gonna get dead because of it, seeing’ as I’ve waited three lifetimes for you, and now that I’ve got you, I’m keeping you.”

Abel and Delilah are the third couple to comprise THE THREE. Three fated couples who are meant to fight to save humanity from being enslaved by bad supernaturals. After a slight initial freak out (um, who wouldn’t after seeing vampires and werewolves?), Delilah realizes her connection to Abel very quickly, and accepts exactly what he is right away.

What I’d felt my whole life was not natural. The bond I was building with Abel wasn’t either, but it was strong and it was beautiful. The fact it was fate made sense.”

I loved the first half of the book, total 5 star read. It was nice having a couple get together without fighting it. My favorite part was actually Delilah’s dad and his biker buddies coming to stay. I totally loved Hooker, and would love these guys to get their own series, or maybe visit with Chaos? The relationship between Delilah and her dad was amazing.

I also enjoyed seeing the two couples from the previous books, plus Gregor and Yuri. But around the halfway point the book began to lose steam for me. Maybe I was too crazy with Christmas, but I don’t think so. The Three just spent a ton of time hiding away and waiting…and waiting… for a move by the bad guys. We were told of some happenings but never experienced them. Luckily, this part of the book was saved by a secondary romance that I totally loved!

While the whole series lead up to the epic battle that was foreshadowed, it was filled with every kind of magical creature. Witches, Vampires, Werewolves, Golem, and Wraiths, and introducing all of these took away from the romance a bit. Despite a small bit of silliness to me, the battle was exciting, and a bit reminiscent of Jeaniene Frost’s Night Huntress Series (one of my favorite), where there are pretty epic battles in addition to lots of hot sex and romance. 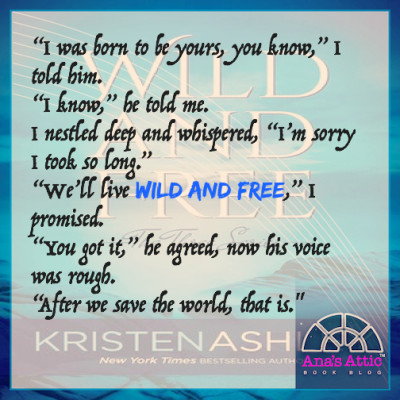 I found myself very emotional towards the end. I was crying lots of tears, and I didn’t even know why, just the whole thing made me emotional, as Kristen often does.

I loved the end to The Three Series. Most of it was 5 stars for me, except for a spot in the middle that dragged. There were a lot of characters to keep straight, and Kristen helped with that very well. I loved Delilah and her acceptance of everyone, and I especially loved her relationship with her father. I enjoyed the secondary romance, and would have liked a whole book about it! Wild and Free was hotter than many of Kristen’s books, but the battle was more of the focus rather than the romance. The Three Series is definitely up there with my favorite paranormal series, and I really hope we see more of Hooker somewhere else.

“I’m a werewolf vampire. I exist on human blood. I can tear a man’s head off and I have. I’m a monster.”

“I am,” he stated flatly. “And the first chance I’ve had in all my years to understand why I am as I am is to go to that fuckin’ hotel.”

I stared at him, then straightened my body so I was fully facing him. This caused his jaw to get hard again, but I ignored that and stated, “Okay, let’s break this down.”

“Nothin’ to break down.”

“Humor me,” I snapped, his head jerked, and his lips curved up.

“Carry on,” he muttered.

“These being the night we met,” I stated.

To that he said nothing.

I kept going, “So you haven’t torn off unsuspecting citizens’ heads willy-nilly, for the fuck of it, or on a psychotic rampage?”

He pressed his lips together and I knew it was to hide his humor because his eyes lit with it before he unpressed them to say, “No.”

“Right,” I said sharply. “Have you ever had a psychotic rampage?”

He shook his head.

“So let’s get to the human blood part,” I suggested. “When you were,” I paused, “drawing from one of your ex-bitches, did you ever kill one of them?”

“Take too much and make them sick?”

“Do it against anyone’s will?”

His eyes went guarded, but he said, “No.”

He blinked, straightening in his chair, but again said nothing.

“I mean, seriously,” I went on, “I’ve seen lots of vampire movies and TV shows and even the good vamps screw up and overindulge. Hell, Jessica killed three fairies in a ravenous attack. She might have had her issues as a young vampire, but by that time, she was full-on good.”

His brows shot together. “Fairies?”

“What the fuck are you talking about?”

I threw up both hands and cried in exasperation, “True Blood!”

“No, seriously, Jessica is very sweet.”

“For fuck’s sake,” he growled, sounding like he was losing patience, which I didn’t figure was a good thing.

“Okay, back on track,” I began. “Tell me. Tell me one instance in your life where you actually behaved like a monster.”

“I wanna fuck you,” he snarled.

“Yeah,” he ground out. “I wanna fuck you, Delilah. Consumed with the need and I have no idea why, but I can guess, seein’ as it’s like you’re a bitch in heat, I’m a dog that catches the scent and his mind is wiped…wiped of anything…but the need to mount you and”—he leaned forward—“rut.”

“I can smell your fear.”

“It turns me on,” he kept going. “Makes me wanna tear into your throat and fuck you and feed from you. Now, does that make you feel safe?”

“No,” I whispered, because it really fucking didn’t. 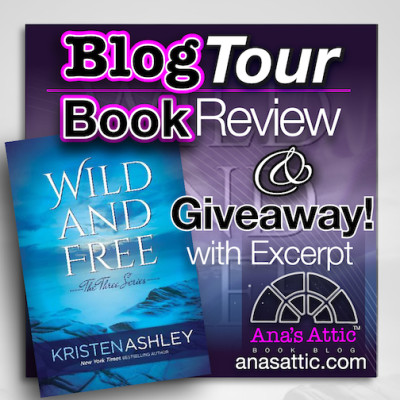