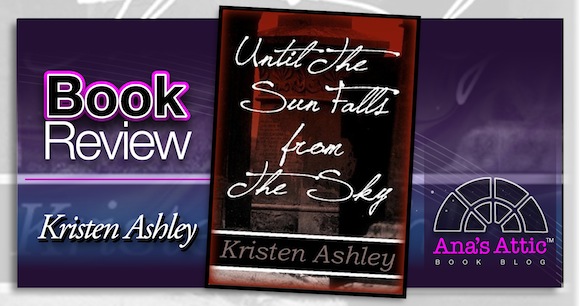 Until the Sun Falls From The Sky (The Three Series, Book 1)

If you have read my blog for any length of time, you know my mad, ridiculous love for all things Kristen Ashley. I read her books and the world around me completely stops for days, so I have to spread them out if my family wants to actually go to school, and…well….eat. So I saved all of her paranormals for when I’m in a book slump and need something totally different.

The thing with a lot of paranormal books that can make them hard to get into is world building. After all, if there are magical/mythical creatures, it needs to be explained how and why they exist in our society without us knowing…or do we know? That is the thing, I think writing a good paranormal book takes so much more creativity because there is so much more mechanics to figure out. Kristen Ashley had no problem in this area. She gradually wove the world through the story, and though it was a slightly slow start (as almost all of her first in a series are, as she sets up the series), it quickly picked up and I fell in love.

Vamps, in this world, have concubines. Concubines come from long lines of respected concubine families, who are there to provide blood for one vampire for several years, before they are retired and taken care of for life. They are highly respected, and it is strictly against the contract to have sex with them. All single concubines in families go to ‘the selection’.

At 40 years old, Leah is at her first selection, she was in a crappy relationship at all other selection times. She had no desire to be a concubine and really never bothered to learn a thing about it, despite her family being in the biz for generations. But not going to a selection when she is not in a relationship would bring shame to her family, so she goes.

The super-powerful 800 year-old vampire, Lucien, had Leah picked out 20 years prior and has been watching her ever since. Lucien immediately declares his intentions, and through favors owed, he made sure his contract was a little different from the rest.

“Because I want you.”
“But I don’t want you.”
That doesn’t matter. You’re mine.”
She blinked and then rallied, “but Mom said the rules are absolute. No one breaks them. Ever.”
“I’m not no one.”
Her head jerked with surprise. “Who are you?”
“I’m your master.”
Now she started to look angry. “No one is my master.”
“I am.”

Lucien was the definition of the word “alphahole”. I mean honestly, he was a total controlling dick! But he was one hot, sexy, strong, you-can-bite-my-neck-anytime dick. He was not only controlling in personality, he didn’t hesitate to use mind control on Leah at first to get what he wanted. But still, there was an undeniable pull between the couple.

Leah was immature as hell, especially for a 40 year old, and I loved that about her. She was fun, feisty and could really stand up for herself. And as much as it drove Lucien crazy, he also loved it. Despite a LOT of pushing and pulling between the two, Lucien knew what he had in Leah, and that she’d be worth waiting for.

“If you taste the finest wine, Leah, you want another glass, and if it takes a while to get it you’re content to wait. You don’t switch to lemonade no matter how sweet that lemonade might be or how thirsty you may get.”

Vampires start with a new concubine by “breaking them”, turning them into obedient servants. But as he begins to break Leah, maybe that isn’t what he truly wanted. What drove me crazy was the lack of trust and communication between the two of them. Leah never never cared to learn more about Lucien’s culture and why he might act like the asshole he acts like, and Lucien knew this, yet keep so much from her.

We soon discover that Lucien and Leah are one of “The Three” couples  prophesied to save humanity from the bad vampires and werewolves who want to take over the world and enslave humans. And despite a really rocky start between the two of them, the love they have develops in spades. 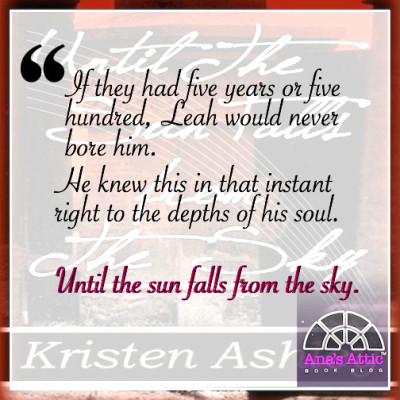 I love how Kristen provides excitement and action in her books amidst EPIC romance and totally hot sex. I have to tell you, I went back and forth between loving and hating Lucien. He swung from a total alphahole to the most amazing, wonderful romantic soul who made it clear that she was the one he waited forever for.

It took some time, but Leah and Lucien ended up being such an awesome couple. Her acceptance of him, and understanding of his always living life hiding his true essence was lovely to read about once we got past his epic asshole behavior.

Rating: 4.5 stars (I think it may have been 5 if I hadn’t read the next one before writing this review and it was even better) 4.5 Heat

Until the Sun Falls From the Sky was even better than I expected, and that is saying a lot, because I expect greatness from Kristen Ashley. For almost a year, I have been struggling with any paranormal book I tried. But not this. I was immediately hooked and will be reading the whole series non-stop in order. I don’t think you need to enjoy paranormal books to appreciate Until the Sun Falls from the Sky. If you are a fan of Kristen Ashley, I think you will enjoy it either way. And sometimes it’s a nice break to be able to believe in things like magic and fate.

Purchase Until the Sun Falls From The Sky by Kristen Ashley 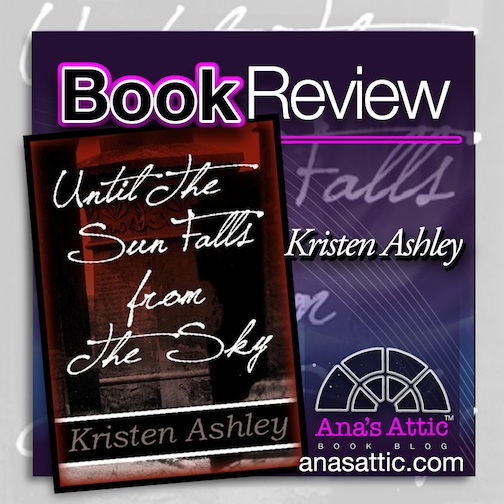