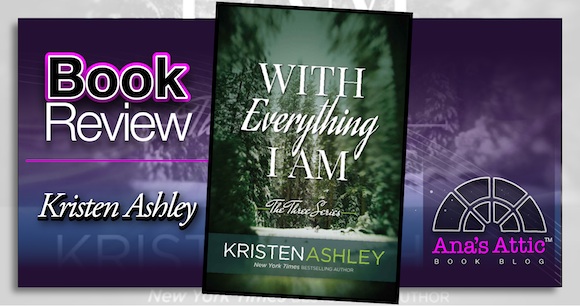 With Everything I Am (The Three Series #2)

Paranormal Romance. Romance stands alone, but there is a major story that runs through all three, so it doesn’t stand alone.

Oh how I loved this book with everything I am! (See what I did there?) Kristen Ashley once again proved that she is an absolute goddess. Even the worst of the 34 books I have read of hers so far was still amazing. Despite my move away from paranormal, With Everything I Am brought me right back and I loved every second! I just love the concept of life-mates, and fate, and in a paranormal book you can really use that in a story, and Kristen did just that.

Callum is a gorgeous werewolf prince out for a run at Christmastime and being chased by hunters; when he runs across a beautiful blonde 5 year old who ended up saving her ‘puppy’s’ life. Sonia is a little different than most people, she has special gifts like enhanced senses that she was warned at a young age to keep a secret, and has since lived a very lonely life. She was never able to allow anyone to get close to her, because she was afraid her abilities would show themselves. She also has a rare blood disease requiring daily painful injections, and dreams daily about her “puppy” who she hasn’t seen in 25 years and a man she calls her “handsome wolf”.

Sonia is destined to be Cal’s mate, even though she is human. He knows this, but because she isn’t aware of supernaturals, Cal plans on waiting years to claim her. But when a plan to harm the now-King’s future mate is enacted, Callum has to step in a little sooner than planned to rescue and protect her (Kristen Ashley Alpha style)! Sonia is claimed quickly and is to become queen Sonia within a week.

One misunderstood overheard conversation set up the majority of the book, with Sonia doubting Cal’s feelings towards her.

…she had to hide her gifts and therefore had no true friends who knew her down to her every secret.
She was the mate to a man who didn’t want her.
She was the queen to a people she didn’t know.
She’d been attacked, kidnapped, and traumatized.”

Sonia knows Callum is king to a secret society, but has no clue they are werewolves, even once she becomes their Queen, which was a major source of frustration for me, but without that, the book wouldn’t have been as good. Callum was also so physical, it was hot. I am a very touchy person, so this made me totally love Cal. He held her is his lap all the time, even when he ate and presided as King.

Indeed, his informing her that his people were “affectionate” was an understatement. He was the touchiest person she’d ever met.
…But with Callum, even when they weren’t cuddling he found ways to touch her. Like while she was cooking, he’d get close, put a hand to her waist, and look over her shoulder at the food she was preparing. Or when she was playing solitaire on his computer, he walked up behind her, wrapped his arm around her chest, pulled her back to his front, and held her there for long moments before bending, rubbing his temple against hers, and letting her go.

And even better…he called her “baby-doll” and sometimes “little one” (even though she wasn’t) sigh….

Callum’s family was also pretty awesome, especially Ryon (he needs a novella or something), and all of the wolves were amazingly welcoming to Sonia, and for the first time in her adult life, she was making friends and joining a family. But despite Callum sounding so great, he was a bit of a dick. But it wasn’t his fault. He is King, he had a lot of ruling on his mind, and had never really dealt with humans before. He didn’t realize that she needed some reassurances, and more importantly, an EXPLANATION! At first she thought she was kidnapped, then she thought it was a cult, so miscommunication and misunderstandings abound, on BOTH of their parts, which got a tad frustrating, but I still loved the book.

I mean how can you not love this?

If I could have wished what I thought was my perfect mate on the wind and had her come back to me in a storm, I could never have come up with anything as exquisite as you.” 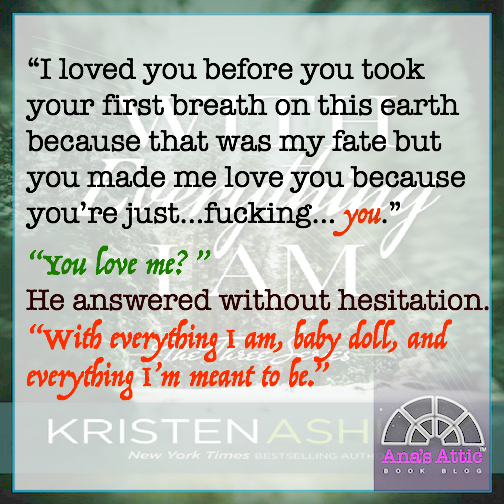 As with all of Kristen Ashley’s series, it gets better with the second one, and that’s saying a lot because I loved the first. I loved the way the couple was drawn to each other and the possessive, touchy, wild-in-bed wolf nature. It was hot and sweet all at once. It was an easy paranormal that even non-paranormal readers will love, and will probably start them looking for more wolf lovin’! Though it’s been a few years since I have been into reading paranormal, With Everything That I Am has quickly moved into one of my top favorite paranormal spots.

Baby doll, you’re about to be claimed.”

Purchase With Everything I Am by Kristen Ashley 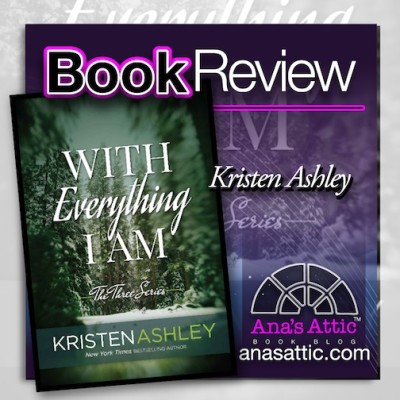