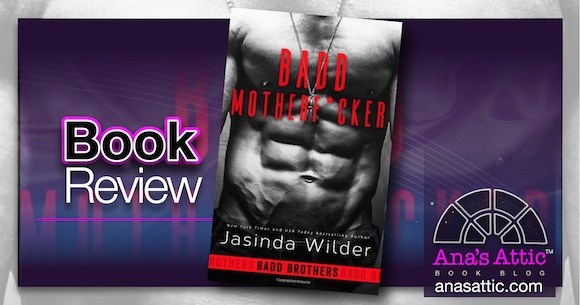 What a fun book! It says so much for Jasinda Wilder’s talent that she can pretty much write any kind of book and it’s a great read. She can write books that make you sob your eyes out, books that keep you on the edge of your seat, books that make you really think, books to help you lose weight, and light fun romances. Badd Motherf*cker may be her most fun to date, and it seems that there are 7 more coming!

“I’m Sebastian Badd. This is my bar, and I’ve got seven brothers all about to converge on this place.”

It’s Dru’s wedding day. She is all ready to walk down the aisle, when she starts getting nervous and looks for her future husband for some reassurance. She finds him fucking her bridesmaid. She gets shitfaced with some of her dad’s friends in a bar by a small airport, and decides she needs to get away from all the memories. So she flags down the first plane she sees and ends up in Alaska. Drunk. In a wedding dress. In a storm.

Sebastian is the oldest of 8 brothers. All of his younger brothers went off to pursue their dreams while he was left running the family bar in Alaska. It’s a small town, but also a cruise port, so there is no shortage of women coming through for one night, and he’s quite OK with that. But his father just passed away, and his will stipulates that all 8 brothers need to get back together and run the bar together for a year. So they are all about to come home.

Instead of one of my brothers, though, an angel walked in.
A wet, bedraggled, hung over, pissed off angel in a sopping wet wedding dress. But sweet mother of goddamn, she was the most beautiful girl I’d ever seen.

Dru’s ex was not a very manly man, so when she sees Sebastian, she is a bit blown away.

Intensely masculine, fucking gorgeous, in a tall, dark, rock-star gorgeous, badass, burly, tattooed sort of way. Six-four if he was an inch, arms that stretched the sleeves of a thermal Henley—what was it about those shirts that was so fucking sexy, anyway?—with tattoos covering his forearms and obviously extending up past his elbows. He had massive shoulders and a broad chest that tapered to a wedge, and I’d bet all the money I had left that his sexy V-cut lead down to a huge cock.

He has plenty of room for now to let the bedraggled beauty stay with him, but as his brothers come home it might get a bit tight. And that was a big part of the book–meeting all 7 of Sebastian’s sexy, gorgeous, single brothers. We got the set up for Rock Star, Genius, Military, fighter books and more.

In the meantime, Sebastian and Dru’s chemistry is off the chart.

Damn. Jasinda writes some HOT sex! And in between the meeting the brothers and the hot sex, there is a sweet, fun romance.

I recently read another book about a runaway bride (after she catches him cheating) falling for a local bartender, and there are tons of series about a bunch of gorgeous brothers, so the story itself is not that unique, but Jasinda found a way to make it fresh, sexy and fun.

Badd Motherf*cker by Jasinda Wilder isn’t the most unique storyline I have read, but Jasinda was able to make it feel new, fresh and fun. We met all 8 of the absolutely gorgeous Badd brothers and I look forward to getting each of their stories. I loved the fun and flirty banter, and I loved the interactions between the brothers. Badd Motherf*cker was a fun, super sexy, light and easy read that doesn’t try to be anything else. I will be picking up more in this series. 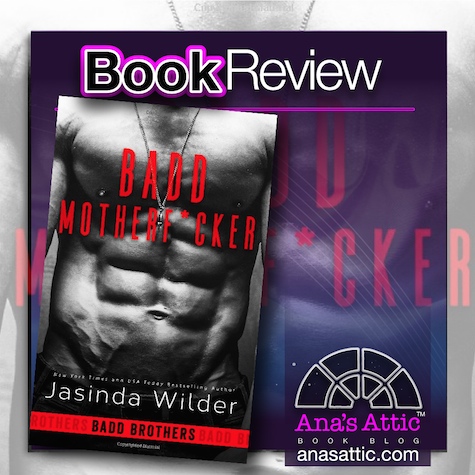