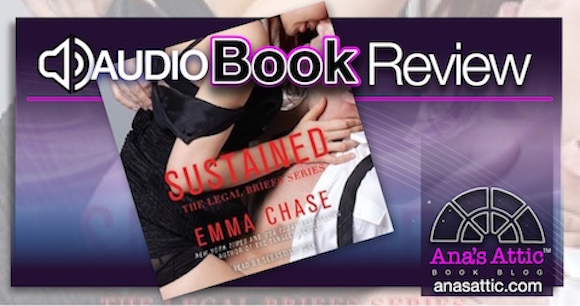 I read the first book in Emma Chase’s Legal Briefs Series,  Overruled, and though I really enjoyed it a lot, I wasn’t absolutely in love. But I knew I wanted to continue the series. So when I saw Sebastian York was the narrator for Sustained, I jumped on that click button so fast! He was the voice of Drew Evans from Emma’s Tangled series as well, and after listening to one on audio, I wished I had listened rather than read that series.

I almost always prefer to read the book over listening to it. But this is one book that makes listening even better. Sebastian York does cocky male point of view so well! And though I had just had him narrate the book I listened to before this, he immediately became Jake Becker for me.

Jake is the cocky, sexy, single-forever lawyer who never does repeats. While he’s always honest about it, it still stings when it happens.

“I’m going for a run. There’s coffee in the pot and cab money on the front table. You don’t need to be here when I get back.”
Plump lips— that were delightfully stretched around my cock last night— now form an unhappy pout. “You don’t have to be an asshole.”
I shrug. “I don’t have to be . . . it’s just easier that way.”

Jake was all about his career. He was the one who didn’t have relationships or commitments, so he could always throw himself into his work. No distractions. Even though he sounds like a dick, because the book is from his point of view, you know he isn’t trying to be an asshole. There is a good guy underneath. he just hasn’t found what he needed to make a change. But everything does change when he is pickpocketed. By a kid.

The kid, Rory, was trouble. But Jake saw himself in the boy. If Jake hadn’t had “The Judge” to help him out, he would have been in jail or dead. He knew that for a fact. So he takes a special interest in Rory. And when he goes to meet the parents, all he finds is 26 year old Aunt Chelsea, the boy’s legal guardian, and Rory’s 5 brothers and sisters, ranging in age from baby to 14. Their parents were recently killed in a car accident, and Chelsea dropped out of college and moved across the country to care for her brother’s 6 kids. But she is way over her head.

When Jake meets Chelsea, he immediately wants her. And to get to her, he needs to get the kids squared away as well. It was really awesome watching this big tough guy deal with 6 little kids.

“Hi!”
I turn to my right, where a toddler— this one definitely a girl, with golden wispy hair and a stained pink T-shirt— sits on the floor, surrounded by books and blocks.
“Hi,” I answer, straight-faced.
She gets louder. “Hi!”
I nod back. “Hey.”
Her face scrunches, her voice drops lower, and she leans forward like she’s about to tell me something serious. But all that comes out is, “Hiiii.”
“Is there something wrong with her?” I ask.
“No,” Chelsea answers, sounding slightly affronted. “There’s nothing wrong with Regan. She’s two.”

He can’t get Chelsea off his mind, but she is way too busy with 6 kids. But when she needs a favor…

Because I want in her pants, of course. Doing Chelsea a favor is the most direct route to doing her. Really not that complicated.

Jake’s scenes with the kids were my favorite. He was so out of his element, yet dealt with them so well. I had a huge smile on my face every scene with them.

I blow out a long breath and decide to hand out some advice. “Riley, boys your age . . . are really not worth your time. They’re selfish and stupid. It’s not their fault; they’re just programmed that way— but they’re still a lost cause. I think you should stay away from all of them until you’re at least . . . twenty-five. Or . . . have you considered being a lesbian?”

She’s wearing a black tank top and silky red pajama pants. My dick is still pretty pissed, but the sight of her breasts peeking above the top of her shirt makes him consider speaking to me again. Eventually.

But believe me, even with the 6 kids, there is time for some HOT sex! Whew!

“Now I’m going to make you come. And it’s going to be every bit as fucking good for me as it is for you. Probably better.” Need pushes on me hard. I yank her panties down her legs and spread her wide open. And then my lips are on her like an openmouthed kiss, lapping and sucking, spearing her with my tongue. Her back arches and her hips buck against me. I grasp her and hold her down, delving my tongue deep inside, tasting heaven. I push against her harder, covering my face in her— fucking drowning. And it’s sublime. I eat her like she’s the last meal on earth, devour her like the delicacy she is.

Emma Chase brought back what I loved about Tangled. In fact, I think I may love Jake Becker as much as I love Drew. Unlike Overruled, Sustained is told 100% from the male point of view, and Emma Chase writes the best male point of view around. **NOTE: Although this is the second in the series, it can easily be read as a standalone** 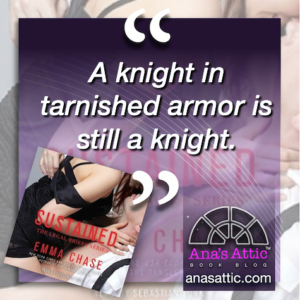 Since I started this in 2015, I am going to consider it one of the best books of 2015. It was filled with my favorite things: humor, heat, heart, kids, and banter, plus an alpha male. Nobody writes the male point of view quite like Emma Chase. Some have come close, but Sustained reminded me that she is the queen of the male POV. Sustained is one book where I’d suggest the audio over the actual book because Sebastian York’s voice and cocky delivery just does things to my lady parts. I loved Sustained, and I am already listening to Appealed and love it as well. But it is not necessary to read them all in order. I think Sustained would stand alone fine without reading Overruled.

See my review for Overruled 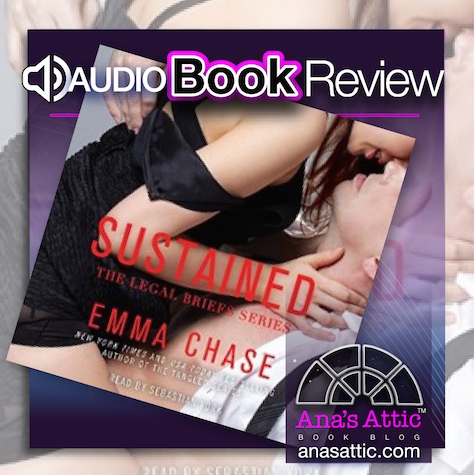