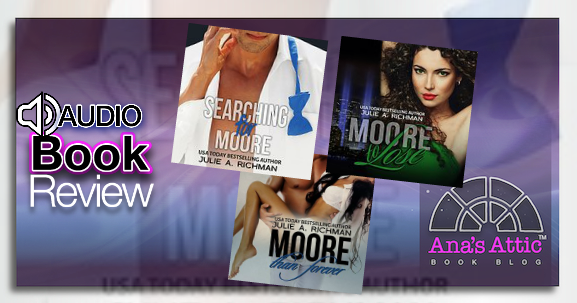 Adult contemporary trilogy. Must be read in order.

I have been wanting to read the Needing Moore series by Julie Richman for a long time, but never really got a chance to commit to a 3-book series. I have heard so many amazing things, that when I saw it was on audio, I grabbed the whole series ASAP.

I loved the epic story that covered over 25 years. I loved the realistic characters. However, I don’t recommend the audio version of this series. At first, I was okay with the male narrator (first and third book), but he got on every last nerve after a little while. It’s a testament to how much I enjoyed the story that I was able to continue to listen to the full series.

In Searching for Moore (Book 1) Schooner Moore (Why oh why does he have such a bad name? It totally went with the annoying narrator’s voice) was a golden boy. Gorgeous to a fault, tennis star, wealthy, modeling since he was in diapers. CJ was the golden girl. You know the kind…cheerleader barbie bitch. She and Schooner got together in college because that’s who they were expected to be with.

But during college orientation (in the 80’s), Schooner’s family joined up with Mia’s family for the tour. Mia was so different from anything Schooner had known. First of all, she was from New York. An east coast, free spirited, little bit bohemian, pot smoking, tell-it-like-it-is 16 year old who was smart enough to start college young. Schooner was fascinated by her, and found that he was able to really be himself with her, not the waspy, tennis playing rich boy he played et every day.

But when CJ went to study abroad, Schooner and Mia finally got to explore what they had. And it was beautiful. Their love affair was fresh and sweet, even when Schooner majorly fucked up.

“And then you came along. And I could be me. I have never felt so connected to another person or so happy.”

The second part of Searching for Moore (Book 1) takes place 24 years later. Schooner and Mia are reconnected after 24 years apart via Facebook, and the love affair begins again.

Searching for Moore ended on a MAJOR cliffy, so I immediately downloaded the second book, Moore to Lose, even though I really couldn’t stand the narrator’s voice.

Lo and behold, book 2, Moore to Lose, had a woman narrating! Because this was Mia’s story. It began really frustrating, because it jumped back 24 years instead of addressing the cliffhanger, but I soon got into it. This story covered the 24 years they were apart, and in many ways this was my favorite of the three books. First of all because I liked the female narrator better than the male (but I still wasn’t thrilled). But mostly because it was real. It was such an honest journey that many young New York City women went through in the 90s and early 2000s.

It was heartbreaking to see Mia’s unhappiness without Schooner. She wasn’t miserable, but she never fully gave of herself. He was always there, in the back of her mind, no matter how much she tried to expel him.

“Where are you? Am I supposed to go through this lifetime without you? Were we just not meant to be together in this lifetime? Would I even recognize you if we were to meet?” As tears streamed down her cheeks, “Or did I already lose you?” You’re my go-to, Schooner, she thought.

Mia got a little crazy.

“Suffice it to say it involved two men and a lot of drugs.”

But eventually after a few losers, she finally began to let go with a good one. Then Julie Richman pulled the rug out from under me and I bawled my eyes out. It may have been in my top 5 book cries because to me, it was all too real.

But eventually we get back to the present day, and back to Schooner’s POV:

“Baby Girl, do you have any idea what you do to me?” There were smiles at either end of the phone at the reprise of the words that started a lifelong love affair.
“Schooner…”
“Yeah, Baby Girl…”
“It’s smoochal.”

And once again…a helluva cliffy.

Moore than Forever was the culmination of the series and where everything came full circle. I love reading about an older couple in their 40’s and I can’t get over how much you really bond with the realistic characters. 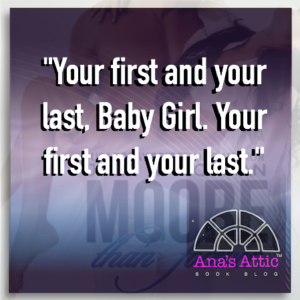 Moore than Forever really brought them together again and is a much happier book. I felt myself shedding much more happy than sad tears, and it is no where’s near as angst filled as the first two. It was a beautiful end to the series.

The Needing Moore Series is an epic, encompassing read. It covers over 25 years and allows you to really get in deep to the story and the characters. Mia was so realistic, she was extremely relatable. The stories made you FEEL. I went through every range of emotions reading this series. I feel like they need to be read in order start to finish with no books in between. I spent about 5 weeks listening to the series so I felt like they were really a part of me and was very invested in their lives. But I do NOT recommend this as an audiobook series. I think if I read it rather than listened it may be a 5-star favorite series (except for the name Schooner). The male narrator, Paul Woodson, was the most annoying narrator I have listened to, and there was absolutely nothing alpha or sexy about him, and the female narrator in Moore to Lose was almost as bad.

The Needing Moore series is one that will stick with me. There were so many ups and downs. Angst and heartbreak, love, hope, laughs, everything. I cried shocked tears, I cried heartbroken tears, I cried happy tears, and I loved seeing the couple reconnect as mature, older adults. Make sure you block the time to read all three in a row, because those cliffys are intense. 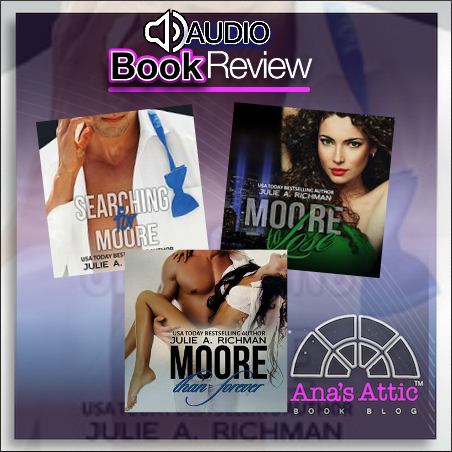