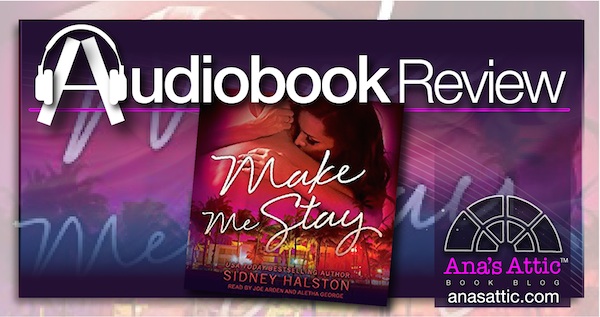 Make Me Stay by Sidney Halston

Pull Me Close by Sidney Halston was AMAZING and completely unique. Make Me Stay is the second standalone in the Panic Series, concentrating on Matt, the hero from the first book’s twin brother. In fact, Make Me Stay starts out before Pull Me Close and ends after. To be honest, I don’t really remember Matt from the first book beyond loving him and being excited for his story, and I am tempted to re-read Pull Me Close now to see it from another perspective. So you absolutely don’t need to read these in order.

Make Me Stay was very different from the first book, though it took place at the same nightclub in Miami. The story is told in two parts, the first in flashback, the second present tense. When Matt met June Simpson at his club, he was instantly intrigued by her. Working two jobs, both as an attorney and at the club, he had no time for relationships, but June made him re-think it all.

“You have a dirty mouth, Mr Moreno.”
“Woman, my mouth is the least dirty part of me.”

June was keeping secrets, we know that. She actually kind of sucked at it, but Matt was so enthralled, he never noticed. You see, June is an undercover cop. (I would not have revealed this, but it’s in the blurb.) Her name isn’t even June, but she still fell for her mark.

“Whatever happens, remember this. This is me and you. This is real.”

When Matt’s dad gets arrested (and so does he for a bit) and everything falls apart for them, June disappears. The love of his life is gone, and he has no idea what happened. Private investigators find nothing. Until Matt finds out on TV that June is actually April, the undercover cop responsible for putting his dad in jail.

“I know this doesn’t mean anything to you, Matt. But I wasn’t lying when I said I love you. I still do.”
“Yeah, well, I fucking hate you.”

Matt wanted nothing to do with her. Her disappearance changed him into an angry, stressed, confused guy, and he wasn’t going to have anything to do with the girl who destroyed him by lying to him then disappearing for a year.

Until something happened, and he had to see her again, because he’s a good guy. I have to say, while it was fun and kind of soap-operaish to read, I don’t really like when this trope is used, it’s just too unrealistic. (This is very hard to review without spoiling.) With this development came a few story inconsistencies, as well as what seemed to be a general personality change for April from cool, tough cop to whiny, unsure girl.

There were a lot of twists and turns to this story, and it was sexy and kept me turning pages but it wrapped up a little quick for me, and sadly didn’t live up to the first book in the series which quite honestly would be hard to beat.

Excellent narration, I loved the hints of cuban (Miami) accents that just made it even better. The narration enhanced the story for me.

Make Me Stay, the second in the Panic series, didn’t quite live up to the first for me, though that would be a really tough act to follow. Though I like Sidney’s writing style, there was a trope used in this story that I am just not really a fan of, and after so many realistically accurate details in the first book, I was surprised to find this type of thing in the next book. There were a few things that didn’t really add up to me, which made the trope work even less for me. But, the story kept me engaged and dying to know what would happen next. It was a very engaging read with excellent narration that I truly enjoyed, but never fell completely in love with. 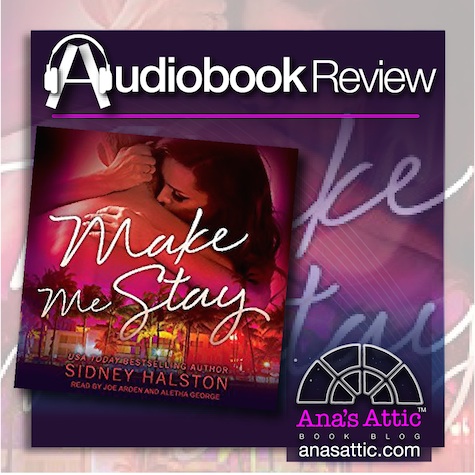