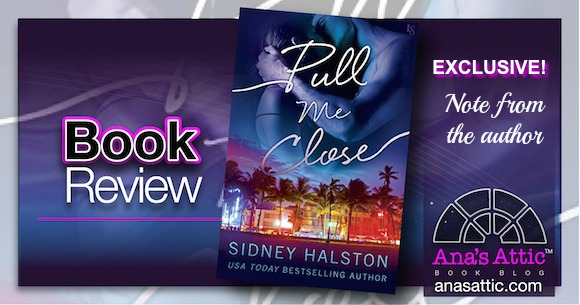 Pull Me Close by Sidney Halston

Pull Me Close by Sidney Halston was a super unique, emotional read that has a lot of truth to it (see the author interview below). Set in Miami, what makes this story so unique is the severe mental illness the heroine suffers from. Is that the right term? Well, yes and no. It sounds like she is cray cray from that term, but no, she suffers what so, so many people I know suffer from, anxiety and PTSD. But her case is extreme. So extreme she hasn’t left her apartment in months.

Katherine is from New York City, and her experiences on 9/11 changed her life and made what was once a happy, free young lady into a recluse who orders everything she needs online and works from home. Since she has been sheltering herself, she thinks she is better enough to make a quick appearance at her sister’s engagement party at “Panic”, the long-standing hottest nightclub in Miami. But once she gets inside, it’s a whole different story.

I have never experienced a full-on panic attack, but I have read up on them a lot, because I live with someone who suffers from it. Reading up on it is way different than reading it in first person story form. Seriously, I think I had a panic attack with her. It was described so vividly I literally felt the tightness in my chest with Katherine. It got so bad, she passed out at the club, and woke up in an office in the arms of a very angry, very hot man. There is a pull between them, but he kind of looks at her with disgust.

Nick (aka Nico) has been burned before. Badly, by his druggie ex.

“I never thought that after two years I’d find my fiancee snorting meth off my best friend’s cock in one of the back rooms of my own fucking club.”

So as soon as he the hot club owner sees this beautiful girl who passed out, he immediately thinks she is a druggy and is ready to stay far, far away. But being a decent guy, he has to take the disoriented girl home. And of course, after leaving, he can’t stop thinking about her.

“She intrigues me in ways no one ever has. She’s drop-dead gorgeous but has absolutely no clue. She’s shy yet feisty. Scared but fucking braver than most.”

Katherine was changed by the experience. She has decided she wants to really live instead of hiding out from life.

“I don’t want to be defined by my illness. I’m not a crazy person. I’m a person who has fears. But if I hole myself up in here and stop living, then the illness is who I am. I don’t want my anxiety to win. I didn’t realize it was winning until that moment at Panic.”

Katherine couldn’t stand him thinking she was a junkie, so she made sure to set him straight. The pull between them was enormous. But how can a nightclub owner have a relationship with a woman who can’t even leave her apartment? They start as friends, with Nico being a cheerleader and supporting her attempt at recovery. Pushing, but not too hard. Since nobody else really knew of her illness, she had nobody to push her to get help.

Tell me what you need. I want to help.” I turn in his arms and look up at him. He did research? God, he’s wonderful. “Pull me close and hold me tight,” I whisper.

While Pull Me Close is definitely a love story, it is very much Katherine’s story, her growth and her healing. But problems this deep can’t be erased by a guy, no matter how awesome he is.

“You pull me close then you push me away Katherine. One day you’re going to wake up and you’ll have a mountain of regrets piled up in your tiny little apartment.”

As a person who lives with someone with anxiety, I would have liked to have seen a little more from his POV. Honestly, part of me wanted to yell “watch out, because you will be dealing with this for the rest of your lives, and when you can’t fix her anymore, it will slowly break you.” I am reading from a different perspective than most I think. Yet I still loved it. It helped me to understand more what my husband goes through. I think if you are someone that suffers from anxiety, Katherine will be the most relatable character you have ever read about.

“I can’t untangle myself from her. It’s like she’s brought a light and purpose back into my life even though she has a dark cloud hanging over her.”

I absolutely LOVE the excitement at the end and how it all came to a head, though I didn’t think it was necessary for the book, it added more of a physical element to what was a pretty mentally heavy book.

“Life is just a series of curveballs thrown at you. Some knock you down. Some you hit over the fence, making you feel like a winner until the next one comes barreling by. It’s how you react to those that knock you down that define you.” 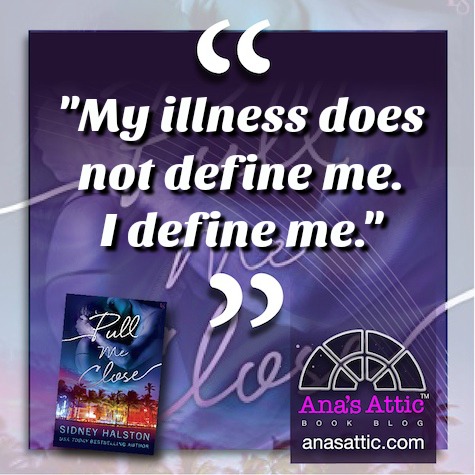 Pull Me Close was a completely unique story in every way. It is one of the best books I have read that dealt with anxiety and PTSD, and the only one where it was the female who had it. There is no question that the author has experienced this herself because the attacks were so vivid and realistic. While this is a very sexy romance, it is as much the story of Katherine’s healing as it is a romance. I loved how it wasn’t all tied up in a neat little bow at the end and how it wasn’t the man who saved her, but having a strong and understanding partner can go a long way towards helping heal along with therapy.

Thanks for having me here Ana! This is going to be a little hard to say without giving too much of the story away, but here goes….

PULL ME CLOSE has been the fastest book for me to write because so many factors were based on reality. But, it was also the hardest because it’s so personal. Even though it’s a romance and has a lot of sexy moments, the focus is primarily on Katherine’s struggle with anxiety and agoraphobia. I’ve been very open with my personal struggles with anxiety, which is why the words flowed so quickly with this book. It wasn’t difficult writing an accurate description as to how Katherine feels when she is having a panic attack or when she’s scared to walk outside her house. Luckily, my anxiety has never been so severe I’ve stayed holed up inside as long as Katherine has, but I can empathize with her struggle.

Now, the part of the story that most people do NOT know is the reason that Katherine is agoraphobic, the trigger that made her this way. Well, she is actually loosely based on a true story. A friend of mine went through the same thing she did but for a much longer period of time. Without giving too much away, we’ve all heard the horrible stories from 9/11 but I don’t think people talk about those who survived but were stuck on elevators, trains and in places they couldn’t escape from. Sometimes for a few hours or in the case of my friend, over 35 hours! Imagine not knowing what is going on in the world for over an entire span of a day. That is enough to make anyone panic, don’t you think? And that’s what happened to Katherine. In my case, my friend was ultimately fine but she does struggle in confined places to this very day. I’m sure those who haven’t read PULL ME CLOSE are now curious to see what happened to Katherine. I promise you—it’s not something you’ve heard in other romance novels. Go check it out and see and I’d love to hear your thoughts.
XOXO,
Sidney 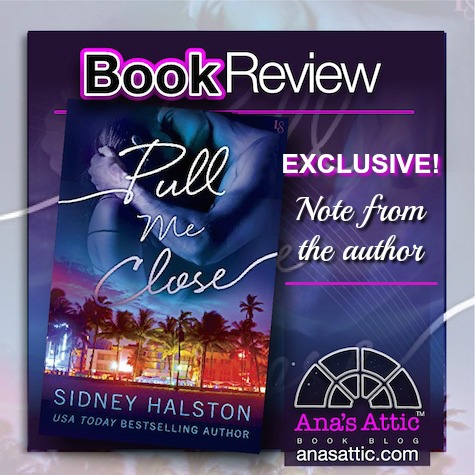