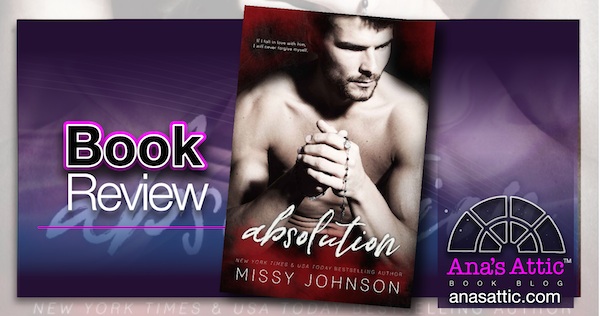 This post may contain affiliate links, where we earn a few pennies for giveaways if you purchase through our links.

Absolution by Missy Johnson is the first book I have read by this author (edit: I thought it was until another review linked to this one! lol!). I enjoy a taboo romance and there blurb really grabbed me. This was a double taboo! Not only was the hero the person who ruined the heroine’s life, but he is a priest as well!

The story begins where we meet a family suffering from a daughter’s suicide after being raped by her boyfriend. Hannah is her little sister, and this rape had lasting effects that reached even further than her sister killing herself, her father died from it as well. At the age of ten, Hannah had to take care of her and her little sister as the family fell apart. And there was one person to blame for it all. Declan James, her sister’s rapist.

Fourteen years later, Hannah is working at her dream job, being a social worker in child protection. It is a brutal job, and she puts her whole heart and soul into it. After a horrible, heartbreaking case ends with a young child orphaned, the only person this girl would respond to is a local priest. A priest Hannah finds herself drawn to. Until she realizes—it’s Declan James.

Torn between knowing this man’s past as a rapist and wanting to protect and heal the young orphan, Hannah realizes the only thing she can do is supervise the time between Father James and the girl, which, of course, has them together a lot.

“I’ve fallen in love with the one person I never should’ve even given the time of day.”

I have to say, while this kept me involved and I liked the story, I didn’t really love Hannah, and loving the heroine is what I need to love a book. I felt like she thought she knew everything and never gave any chance that things aren’t always what they seem, especially to a someone who was only 10 at the time. But the thing that really bothered me was that she was the aggressor. He was trying to be a man of God, trying to atone for his sins and she kept pushing. Yet she was betraying her entire family and corrupting a priest.

And while I liked him more, for goodness sake, he is a priest, he could have fought harder!

“He won’t meet my eyes, and I won’t meet his. We’re both embarrassed and ashamed, but for different reasons. He’s betraying his God, and I’m betraying my sister.”

Maybe if I really felt their connection build up I would have felt differently, but there wasn’t really a build-up. I didn’t feel that connection. It happened quickly, and I just didn’t get it—why would she push it with a priest? How can he betray his vows that easily?

*Note: I received an ARC for my honest review that had more errors than most arcs, but I do not know if they were all fixed in the final copy.

If you like taboo, this is certainly the book! Missy Johnson is a good storyteller that kept me involved the entire time, but sadly I never fell for the heroine and didn’t feel the connection build up so I never understood why she seemed to push him to be with her. It had the bones and storyline to be such a great novel, but it fell short somewhere, I just never felt like there was enough emotion for them both to go against everything they are for each other. Add another 50 pages of them connecting and falling for each other, and this could have been amazing. 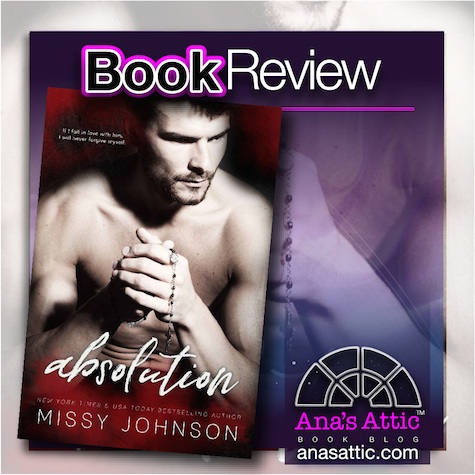