The lovely and talented Jasinda Wilder has offered to give away 5 audible copies of Stripped here at Ana’s Attic! I love audiobooks. I listen to them whenever I’m in the car alone or when I go for a walk (which is why it’s taken me a year to finish 2!) But when I used to commute I listened to one a week! Jasinda chooses her narrators very well, so you always get a quality book. The audiobook of Falling Into You even has an exclusive song that Jasinda wrote, produced, and performs! She has an AMAZING voice too!

If you decide you like audiobooks, Audible has a great deal. Try Audible Now and Get A FREE Audiobook or Get Your First 3 Months at Audible.com for $7.49/month! 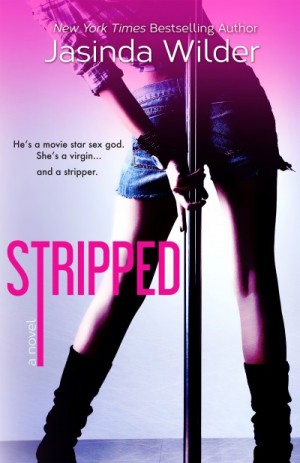 Then, one day, I meet a man. He’s in my club, front and center. He watches me do my routine, and his gaze is full of hunger. Not the kind of desire I’m used to though. It’s something different. Something hotter, deeper, and more possessive. I know who he is. Everyone knows who Dawson Kellor is. He’s People magazine’s Sexiest Man Alive. He’s the hottest actor in Hollywood. He’s the man hand-picked for the role of Rhett Butler in the long-awaited remake of Gone with the Wind. He’s the kind of man who can have any woman in the entire world with a mere crook of his finger. So what’s he doing looking at me like he has to have me? And how do I resist him when he looks at me with those intoxicating, changeable, quicksilver eyes?

I’m a virgin, and he’s an American icon of male sexuality. I’m a stripper, and he’s a man used to getting anything and everything he wants. And he wants me. I know I should say no, I know he’s the worst kind of player…but what my mind knows, my body and my heart may not. And then things get complicated.

Please see my review of the kindle version of Stripped here

New York Times and USA Today bestselling author Jasinda Wilder is a Michigan native with a penchant for titillating tales about sexy men and strong women. When she’s not writing, she’s probably shopping, baking, or reading.
Some of her favorite authors include Nora Roberts, JR Ward, Sherrilyn Kenyon, Liliana Hart and Bella Andre.
She loves to travel and some of her favorite vacations spots are Las Vegas, New York City and Toledo, Ohio.
You can often find Jasinda drinking sweet red wine with frozen berries and eating a cupcake.
Jasinda is represented by Kristin Nelson of the Nelson Literary Agency.
.
Connect with Jasinda Wilder
.
GR | Website | Facebook | Twitter | Amazon
.
Hang out and party with Jasinda all weekend long
in Ft. Lauderdale March 7-9 at Wicked Book Weekend
.
Check out Jasinda’s Newest Series The Ever Series

The Ever Series order (click covers to purchase in your country)

•Purchase Falling Into You: Amazon | BN.com | iBooks | Review
SEE MY INTERVIEW WITH NELL AND COLT HERE

•Purchase Falling Into Us  Amazon | BN.com | iBooks | Review
SEE MY INTERVIEW WITH BECCA AND JASON HERE

•Download FREE The Big Girls Do it Box Set by Jasinda Wilder: Amazon

I’ll be giving away 4 audiobooks here, and one as a flash giveaway with this post on Facebook.