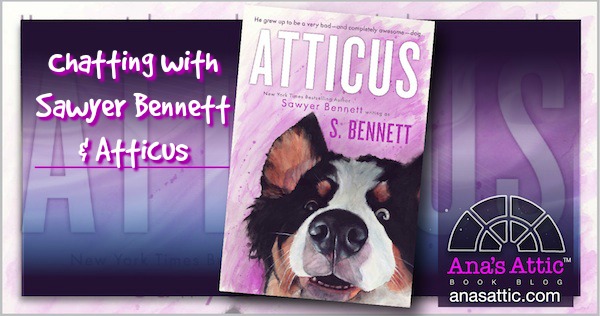 Sawyer Bennett approached me after I wrote my 5++++ star review for Atticus, and she asked if she can ask me a few questions. I think she is posting my answers, so I figured I’d post here as well, with a BONUS! I interviewed Atticus!

SB: Atticus is hard to fit into a certain genre. It’s got some women’s fiction elements and it’s geared for dog lovers, but it’s definitely not your typical romance. Why did you decide to give this book a try?

SB: As a romance blogger, how would you convince romance readers to take a chance on a book like Atticus, that’s not necessarily built around a romance between a man and a woman?

Ana: I have actually been surprised that this wasn’t number one on Amazon this week. It reads like a romance, even if in a way, most of the “romance” is between a dog and it’s owner, there is so much more. It’s about love and friendship and growth and realizing your potential. And there is an awesome little romance in the end.

I have to admit, it’s also really nice to have a few non-smutty reads in my pocket for people who aren’t into that. I love that I can recommend it to anyone, and I even read some to my son.

SB: What is the single biggest thing about Atticus that you think will appeal to romance readers?

Ana: First of all, if you are a romance reader who loves dogs (or cat lovers can relate too I think), you NEED to read this. Atticus was an awesome “book dogfriend”. You will still get all the feels you get with a romance, it’s just a unique and fun twist.

SB: Now, there is a romance in this book although it doesn’t start to develop until later on in the story. What about Jack and Hazel’s relationship made you swoon?

Ana: Dammit! I went back to find a quote that would show the swooniness of Jack and I now have bittersweet tears running down my face again! I couldn’t really find one quote that did him justice though. He was just a rock. He was there for HER. He waited until SHE was ready. I loved that they bonded over dogs and he loved them as much as she.

SB: This book caused you some tears. Knowing that, why do you think readers should still give it a try?

OMG the tears mean this book made me FEEL! As a rule, I try not to read ugly cry books. I am an emotional person to begin with, so I cry at happy endings. That’s usually enough tears for me. But while Atticus had some sad, it helped complete the story and solidify Hazel’s growth and readiness to have Jack in her life. They were bittersweet tears. Most of the book is warm and happy and loving.

***I’m not sure if this is a spoiler, but if you are worried about the reason for the tears, click for reassurance***:

* I want to assure you, that my tears were NOT for a dog dying, that would have devastated me.

I have questions now!

Ana: I know nothing about the background of this book. Since I now follow Atticus on social media, (Facebook – IG) I know he’s a real dog. So tell me, how much of this is based on real-life?

SB: I can tell you every bad thing in the book came from the real Atticus doing it himself. He’s eaten a king-sized mattress, multiple feather pillows, door casings, baseboards, millions of toilet paper rolls, countless food items off the counter including taking a ceramic baking dish off the counter and setting it gently on the tile floor so he could eat out of it without breaking it. Oh, and he’s had 2 surgeries for socks plus two additional inpatient stays for other socks that passed safely. He’s been to a behavior medicine at NC State vet school (doggy shrink) to figure out why he’s so freaking bad!!!! Ha ha!!!!  Oh yeah.. .and he eats his own poop!!!!!!!! Gah, I love him.

Ana: What is your favorite flavor of sock?

Atticus: My favorite flavor is Under Armor footie socks after mom finishes her mixed martial arts. They are quite yummy and go down very fast.

Ana: What was your favorite non-food item you ever ate?

Atticus: Hands down… feathers from inside mom’s pillows. They’re light so I feel like the calories don’t count. Mom is providing you just one of many videos she has of me destroying her feather pillows. (See below)

Ana: How does it feel to be famous and be on a book cover? Do you like having all the other dogs taking pictures with it?

Atticus: I always knew I was sort of a stud among dogs but this whole book thing is a bit humbling. I wasn’t sure others would appreciate how bad I am the way my mom does. And all the other dogs posing with the book are beyond my wildest dreams. 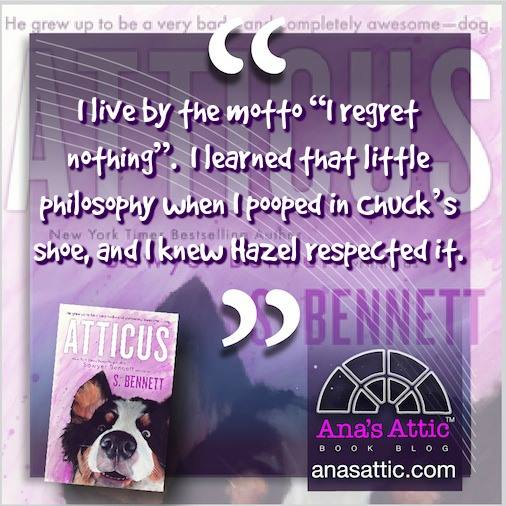 Thanks Atticus and Sawyer for hanging with me!

PS: Atticus has a secret admirer and she is very possessive: 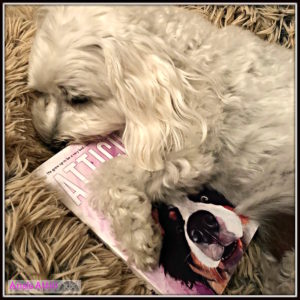 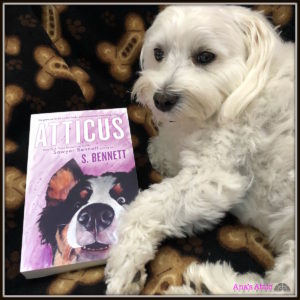 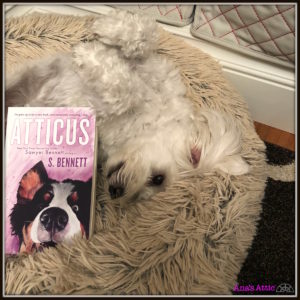 This is the “Down & Dirty” portion of my review.

CLICK HERE for the full, spoiler-free review with quotes and Likes and Dislikes.

I think Atticus may be a new all-time favorite. It’s nice to have a book you love that you can recommend to anyone whether they read romance or not. If you are a dog lover (or any animal), you will especially love Atticus. If you aren’t, you will become one after reading it. I couldn’t shut up about Atticus to my family, and I think I read my son half of it. Getting in Atticus’s head was so much fun because my dog Lucy reminds me of him in many ways. She is crazy in love with me, she won’t go out with anyone but me, goes bonkers when I get home (way more than anyone else), sleeps on my head, growls at my husband when he touches me and gets into all kind of trouble even when she knows the rules. For goodness sakes, she poops right in front of her doggy door when I leave because she is mad at me. Until I had this dog, I never really understood how smart and in-sync an animal can be with its owner, and I think that made Atticus even more special to me.

While Atticus is a story about a dog, it is SO MUCH MORE. This was such a strong story about how love and family can come in the most unlikely forms. About recognizing your self-worth and living up to it. About how much unconditional love for another being can change you profoundly. It was about love and friendship and self-worth. It brought out every emotion and made me feel so deeply that my dog had to lick my tears away. Atticus was a saga that spanned around 7 years, so don’t expect it to be a quick, fluffy read about a dog, and grab your tissues. I literally hugged my Kindle (and my dog) when I finished. I can’t help but give Atticus ALL the stars. He’s such a GOOD BOY!