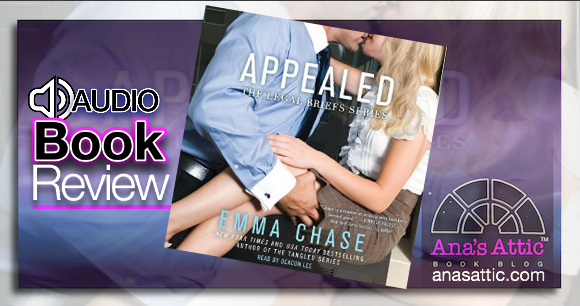 Humorous Adult Contemporary. Third in a series but can very easily stand alone.

Wow. Another home run from Emma Chase, the queen of male Point of View. Appealed is the 3rd in a series of related standalones, but each can absolutely stand alone easily. Appealed is the final book in the Legal Briefs Series, about 3 law partners. I enjoyed Overruled. I listened to Sustained and absolutely fell in love. While that’s still my favorite, Appealed comes damn close. I don’t think any narrator could be as good as Sebastian York (except Zachary Webber), but Deacon Lee came pretty close, and I highly recommend Appealed by Emma Chase in audiobook format.

Brent Mason never let the loss of his leg as a child stop him. In fact, the women may even like him more because of it. He is a winner in and out of the courtroom, and he knows it. He grew up very wealthy but has abandoned the family money and made his way, very successfully all on his own. Well, with his butler.

Just when Brent thought he had an easy plea bargain case, a feisty new prosecutor shows up and she’s out for blood. But Brent is blown away. It’s his first crush. His best friend growing up who just disappeared without a trace. But she went from kind of plain in baggy clothes to va-va-voom!  Kennedy Randolph is gorgeous, self assured and wants to make a name for herself at her new job fast. She sees Brent, the selfish asshole who humiliated her in high school, and she is going to put him in his place in and out of the courtroom.

Once upon a time she was my best friend. For a hot minute, she was more. After that, she hated me. And then she was just… gone.
I haven’t seen her for fourteen years, and the last time I did, she sure as shit didn’t look like this.
“Kennedy…” I whisper, still not entirely convinced it’s her.
She regards me with a tilted head, a cocked hip, and a disdainful smile.
“Hello, Dickhead.”
Okay. Now I’m convinced.

As they face-off in court, Brent has no idea why she hates him so much, but he damn well plans on finding out. Dealing with the loss of a limb, Brent makes is clear he has spent a lifetime in therapy, so he is pretty self aware. He’s not one of these guys who tries to hide or run away from his feelings.

“I want to figure her out, to learn every part of her- the soft curves, the sharp edges, the shadowy corners she tries to hide. I want to break down her doors, climb her ivory tower, I want to slay all her fucking dragons.”

It’s been 14 years but the chemistry and banter are totally still there.

The two of them argue so much in court that even the judge realizes there is more than just two lawyers arguing a case. 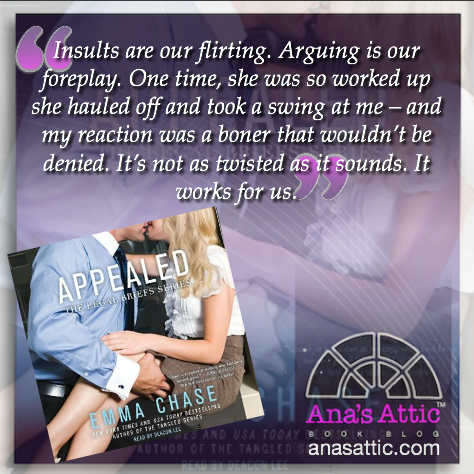 Once Kennedy finally gives in and trusts Brent, their love is beautiful with all the history they have and the common interests they have now. 15 years of hurt, love, friendship and chemistry never went away. It was just a fire that needed a little stoking.

Appealed by Emma Chase is another male point of view masterpiece from Emma. Filled with witty banter, tons of emotion, plenty of laugh out loud moments, hot sex and visits with the gang, I loved everything about it. While the narrator didn’t pull off cocky alpha quite the way Sebastian York does, he did a really good job, and I do recommend the audio version of Appealed. 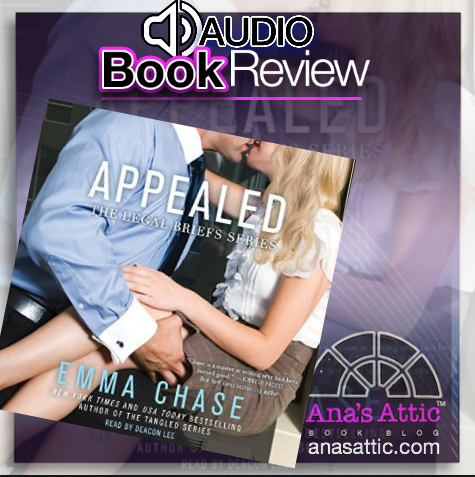