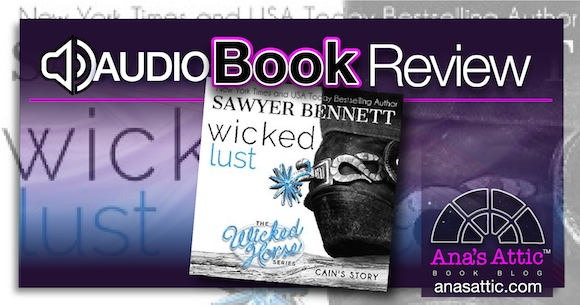 It’s been a while since I read the first in the Wicked Horse Series, Wicked Fall, so I didn’t remember the main character, Cain. But that’s OK, I met the big, scarred, hot and scary Cain in book 2, Wicked Lust, and I’m OK with that! I do, however, think you need to read Wicked Fall first to fully understand the plot lines, setting and secondary characters, even though the romance stands alone.

Cain is head of security at The Wicked Horse, and it’s secret sex club, The Silo. He protects the patrons, but also protects the secrets of the club itself. He is also on the fantasy makers team, making all kinds of dirty fantasies come true. A beautiful, innocent blonde has been coming in a lot and he is finding himself drawn to her like no other.

Sloane is a reporter working for a political magazine. She relocated to the area to expose the sex club and the governor’s possible involvement in it. She has been coming to The Wicked Horse trying to find a way in to the good part, and has her eye on Cain. Not just for the “in” she might get, but he is HOT, and she has heard lots of rumors about the size of his package and the amazing way he uses it.

“While I get hit on all the time, women have a hard time holding my gaze the way this one does. They’re content to stare at my feet while they try to flirt because my eyes are sometimes too cold and my scar is too angry looking. But not this woman.”

When they finally connect, the chemistry is off the charts.

“You have the softest lips. I’ve wanted to kiss them all night, but I got too caught up in the need to fuck you.”

Holy hell, this book is H-O-T!!! It’s dirty and kinky and YUM! Way hotter than the first in the series, yet the story was never sacrificed for the sex. Cain was a fantasy maker after all, and Sloane has some hot fantasies!

The problem was, for me, Sloane was a manipulative liar, so I had some trouble connecting with her and rooting for her, plus I lost a little respect for Cain for falling for it.

“I am in fucking lust with this girl. I mean true lust, not just a generalized horniness to fuck someone.”

As the book continued and we learn more about her, I warmed up a bit, but perhaps my personal feelings about lying affected my love for the book. I also found the plot to be a bit predictable. I mean you know the plot, you know he will eventually find out…then what happens? I, for one, didn’t like what happened at first, but the couple did grow on me, and the sex was totally the best kind of sex. Dirty, kinky and yummy.

The Wicked Horse Series is filled with delicious, dirty, kinky sex. Nothing is taboo. And although there is a ton of great sex, there is also a lot of story, with good character development. In this installment, for me, the sex is what brought it up to 4 stars, because I had some trouble connecting with the couple, especially Sloane. There were just too many secrets and lies between them, and I kept waiting for them to be exposed. The plot was a bit predictable, but still, I do plan on continuing this series on audible, because I need Bridger’s book, and the sex is off the charts. I thoroughly enjoyed listening, and the narrators were really good for the characters played. Mr. Ana was a happy camper the days I listened to Wicked Lust! 😉 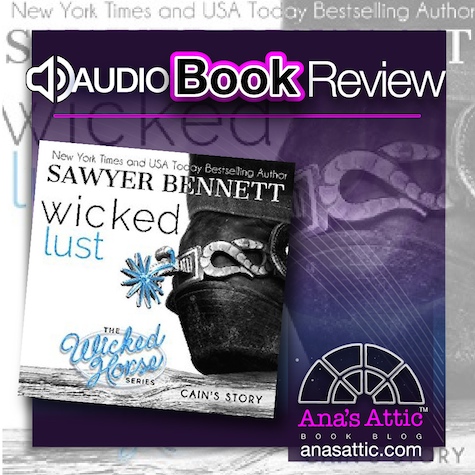