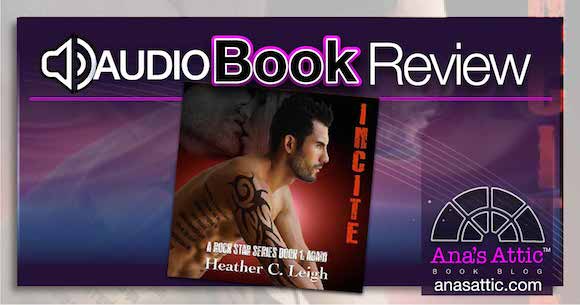 I have been wanting to read a book by Heather C. Leigh for over a year, and just kept getting sidetracked. But when I saw she had one on audio, I jumped at the chance to read Incite! I will usually never start an author with a spin off of a series I never read, but in this case it’s the only audiobook, so I assumed it must stand alone well, and I was correct. I would have never known it was related to any other stories. First of all, I need to preface this review by GUSHING about the narrators. They did the English accents brilliantly–hers being from an upscale area of England and his from the East End. I usually don’t really like accents in my narrators, but in this case….wow. They were phenomenal. The male narrator even did American accents well!

Ellie Palmer grew up fairly well off. But when her father lost his job and her mother got ill, her family was forced to move to to one of the poorest areas in London. Though Ellie met Adam the first day of school, he basically blew her off. But he was secretly keeping an eye on her. He knew she was too beautiful to not get herself in trouble in these parts. Thank goodness for his diligence, because he and his best friend Dax were able to stop Ellie from getting raped on the way home from school one day. After that, Ellie and Adam became great friends, and they were practically inseparable. The connection was real and vivid.  Adam was no virgin. He was well known in his high school for his skills in the bedroom, but he had a no repeats rule. But with Ellie, Adam was a total gentleman…for a long time.

“Having Ellie near me is like the sweetest pleasure wrapped around the worst torture I can think of. Every thought I have consists of me touching her, kissing her, and God help me, having her naked beneath me.”

Adam and Dax have always been in a band together, but the band began to get some gigs and find success. They were offered a deal to head to the US to tour right after high school but after a little trouble cropped up, they had to get out of London sooner than expected. Ellie had plans to go to college in California. So not only would she be with her boyfriend, her best friend from her old town was there as well. Despite having to be apart for a torturous few weeks while Adam waited in the states for Ellie, Adam was counting the moments until they reunited. Living every moment waiting for her rare calls. But then tragedy struck. And plans changed.

“Ellie lied to me because she knew I would come home to be with her. She selflessly gave me up so I could have everything, when the truth is, now I have nothing”.

This couple was nothing without each other. Neither was able to move on. Adam drowned himself in booze and women, but nobody was a substitute for his Ellie.

The story was told over a span of about a dozen years. There were a number of time-hopping spots that confused me sometimes, but I caught on. A few times I had to remind myself that some of this is the past where cell phones weren’t attached to everyone’s bodies, especially not poor people.

The narration really brought the story and characters to life for me. It was one of my favorite audiobook narrations to date, and I honestly think I liked the story even more because of it.

Incite was an epic story spanning about a dozen years. It was filled with angst, so it’s perfect for all of you angst lovers. There was never a doubt the the two were each their best when they were together. Ellie was a strong character. Adam, despite acting alpha, was’t the strong one, she was, but I don’t necessarily agree with her decisions. There were some frustrating timeline issues jumping from past to present, but nothing too bad. For me though, the thing that made this audiobook so good was the narrators. I often find the narrators ruin a book for me, but in this case, I think they made me love it.

Incite is the first in the Sphere of Irony spin off series of the Relatively Famous series.

New audiobook review up for INCITE by Heather C. Leigh- http://anas.cc/InciteHL -And she is giving away the…