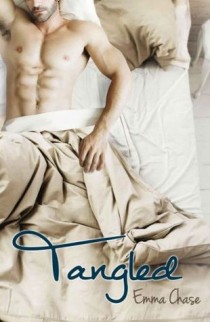 I like to go in blind. I knew there was lots of buzz surrounding Tangled by Emma Chase, and saw it compared to Alice Clayton’s Redhead Series (one of my favorites) and Wallbanger (another love). So all I knew going in was that it would be a fun read. But I had no idea how unique and fun it would be. You see, this book is told entirely from the guy’s POV. Being inside a cocky, arrogant, man-whore’s head when he falls hard was such a fun time!

You guys know I’m a quote whore. My entire kindle is yellow. THE.WHOLE.THING. The “Drewisms” were legendary!

“Because you know how some people have gay-dar? Well, I have dump-dar. That means I can pick out a recently dumped female a mile away. They’re easy pickings. All you have to tell them is that their ex is an idiot for letting them go, and they’ll be begging you to nail them.”

The thing is, it’s more than a story told in a male point of view…it’s told to us, the reader. We are brought into the story, like we are sitting there, watching a movie about his life and he is sitting there narrating it to you and pointing things out. I loved this unique way of telling the story and I had a so much fun reading it! I found myself reading tons of quotes to my husband also. Usually I reserve that for the sexy quotes, but here the fun ones were just as good as the hot ones (and there was plenty of that too).

“Once again, to the ladies out there — here’s a fact for you: Men pretty much have sex on the brain twenty-four-seven. The exact figure is like every 5.2 seconds or some shit like that.

The story begins with Drew, handsome, cocky, star investment banker, expensive suit wearing man-whore, holed up in his apartment with a bad case of the break-ups. Then we go back in time to find out how he ended up here. As I said, he was a total player:

“Once I’m done, I’m DONE. I’m not the kind of guy who rides the same roller coaster twice… Don’t look at me that way. I’m not a bad guy. I don’t lie; I don’t sandbag women with flowery words about a future together and love at first sight… Okay, maybe that’s not exactly true. But I can’t help it if they see me, fuck me and suddenly want to bear my children.”

“For those ladies out there who are listening, let me give you some free advice: If a guy who you just met at a club calls you baby, sweetheart, angel, or any other generic endearment? Don’t make the mistake of thinking he’s so into you, he’s already thinking up pet names.
It’s because he can’t or doesn’t care to remember your actual name.”

He sees a woman on one of his Saturday night prowls, and wants her. Too bad she blows him off, engaged to another. But he can’t stop thinking of her. Until she turns up at his office Monday morning as a hungry new investment banker ready to take him down.

“Kate Brooks is officially scratched off my list of potentials. She is forbidden, untouchable, a no-way-never. Right next to my friends’ ex-girlfriends, the boss’ daughter, and my sister’s best friends.
Well, that last category is a bit of a gray area.”

They compete for the same account, and war ensues:

“I don’t spar with Kate because I like her. I do it because her existence is screwing with the trajectory of my career. She’s a nuisance. A fly in my soup. A pain in my ass. As aching as that mother of a bee sting I got on my left cheek at summer camp when I was eleven.”

But you know he wants her all along. In fact, their sparring sometimes heats up to the boiling point. But she’s still engaged to her childhood sweetheart.

“It makes me want to kiss her and strangle her at the same time. I’ve never been into S&M, but I’m beginning to see its benefits.”

These two are equals, no question about it. They work great together and are totally compatible when they aren’t scratching each others eyes out. And when he gets his chance, he goes for it:

“She tastes… Jesus , I’ve never done drugs, but I imagine this is what that first snort of cocaine feels like, that first shot of heroine. Goddamn addictive.”

I have to say, despite Drew’s dickbag behavior sometimes, you can’t help but love the guy! One thing I really love about him, is despite his fuck-em and dump-em mentality, he respected women as equals.

“For God’s sake, don’t let her watch Cinderella. What kind of example is that? A mindless twit who can’t even remember where she left her damn shoe, so she has to wait for some douchebag in tights to bring it to her? Give me a frigging break!”

Tangled is definitely a MUST READ. This is a book that I will recommend to any adult (who doesn’t mind sex and cursing), no matter what genre they usually read. I think guys will like this too. I’m so glad to see this is a series because I sure do look forward to reading more from this author!

“She’s not just perfect – she’s perfect for me.”