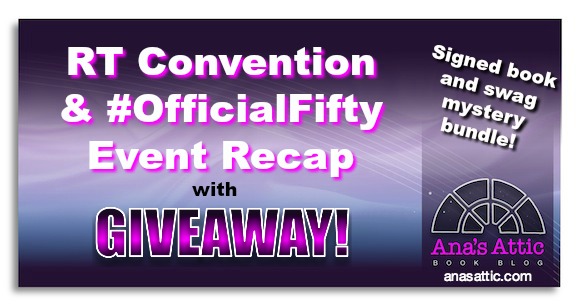 What a week last week! I have been planning to go to RT for a year, and booked my room in Atlanta Wednesday through Sunday. I have never been to RT, and I prefer a smaller, more intimate signing, because to me, it’s not about the stuff you get, but the people you meet. But RT isn’t a signing, it’s a convention with non-stop workshops and parties all week. I went alone, so I was totally intimidated and nervous. Jessica Florence volunteered to be my roommate, so that alleviated some of my anxiety.

Two weeks before RT, I also got an invitation to attend an #officialfifty Fifty Shades Darker event in New York City the same days. After our amazing trip to LA for the Fifty Shades Darker premiere, I didn’t want to miss this, mostly because there was a Q & A and signing with EL James, plus there were MANSERVANTS! (More on that to come). The event was Thursday, but I had a Kristen Ashley event I wouldn’t miss for the world at RT in Atlanta on Wednesday, so you can imagine my dilemma!

First, the story of my plane ride:

I flew Southwest, which is open seating. There was a cool looking girl at the window and I sat in the aisle. We were both laughing about how we were spreading out so nobody would sit between us. Just when we thought we were safe, 2 gorgeous guys get on the plane. One black, one white. The black one sat between us and they escorted his friend back off the plane. We didn’t know what was going on, so luckily our handsome seatmate explained it. The two guys were in a horrible car crash a few months ago. Our guy had his arm rebuilt with metal rods, but the other guy had to have his flesh built up with pig skin, and it was leaking, so they had to wrap him better before he could board the plane. Our guy was super intelligent, observant and well-spoken. He speaks 5 languages. Born in Nigeria to a father with 4 wives, he was supposed to have an arranged marriage, but put his foot down and refused. He is currently in a m-m-f relationship with the other guy (who is German) and a beautiful Russian girl. They have been together for a year and he says that have no jealousy issues because they are never intimate unless all three are together. I think it was the first time I didn’t want a flight to end! The other girl bought drinks and we were talking about everything! Sex, religion, politics, money, nothing was off limits. We were all sad it ended and hugged goodbye.

I arrived at the RT hotel at about 4:00 Wednesday. As soon as I walked in I was blown away. Tons of people with badges with slightly familiar names, but nobody I knew was there. I had a 5:30 dinner with Kristen Ashley, so I needed to get freshened up fast! The first elevator I noticed was this: 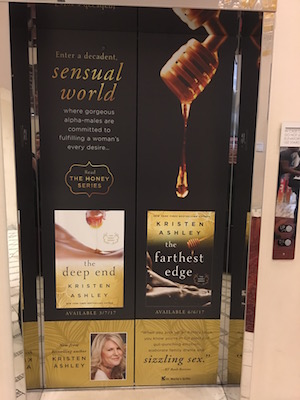 In fact, there was branding everywhere! 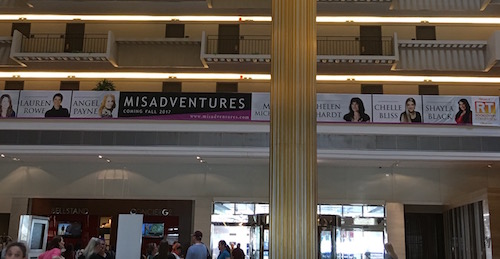 When my key wouldn’t work and I had to go back downstairs. 2 lovely guys who made me feel small helped me with my suitcases. 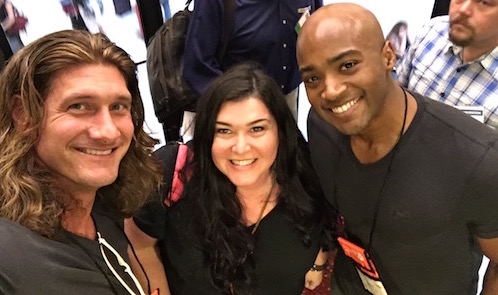 The Kristen Ashley event was across the street from the hotel. The event was a Rock Chick Recharge. There were 18 of us, including a few bloggers, publicists and industry people, as well as 5 people who were nominated to go in a contest. We got awesome celebrity swag bags with a great candle, lip gloss, a camisole, a Rock Chick Martini glass, and Alex & Ani bracelet, shave gel and more! You have no idea how honored I was to be asked to this. Kristen Ashley is my favorite author and she is just as awesome in person as you could imagine. 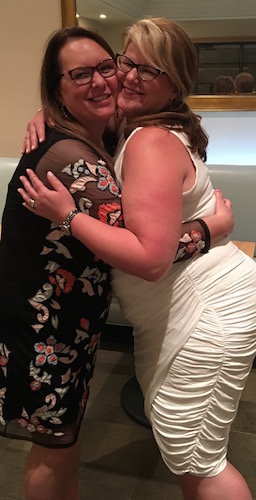 After that, the hotel bar was packed with so many people! I hung out with my Wicked Book Weekend authors T.M. Frazier and her husband and R.K. Lilley and her husband, Aly Martinez and Ahren Sanders. I also met Melanie Harlow for the first time! 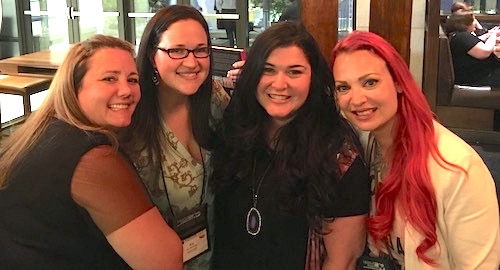 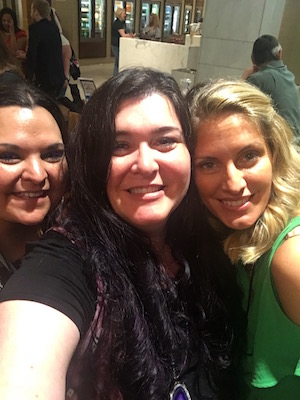 Melanie Harlow on the right

The next morning, I was up and out early to catch a flight to New York for the Fifty Shades Darker event. I met Raegan at the hotel around noon. She is from Canada and has never been to New York, so we walked around Times Square and had lunch  at Ellen’s Stardust Diner before getting ready for the event. 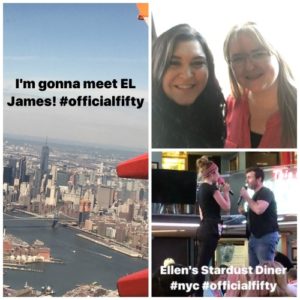 When we got to the Whitby Hotel, we were greeted by a ton of Manservants (click to check it out) wearing masquerade masks, some yummy food, drinks, champagne and dessert. The costume designer was there as well as some costumes. We had makeovers by the film’s makeup artists, there were cool photo booths, a guy reading from the book, props from the movie and more. The manservants were everywhere, catering to our every need, including fanning us because it was crazy hot. 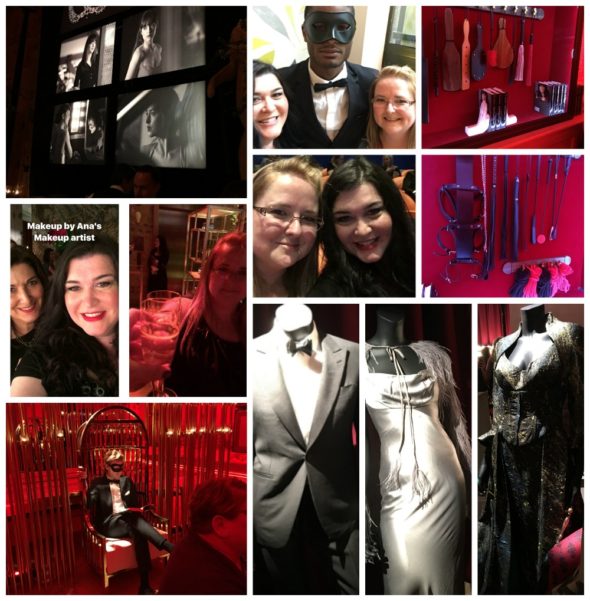 We were then invited into the theater. There were gift bags in every seat with copies of Fifty Shades Darker, Mac lipstick, a Fifty Shades candle, the “yes” keychain, a pen and more. Then EL James came in for a Q & A.  You can watch that below.

Then we had a signing, and I got a HUGE hug from EL James. She knew who I was! EEEK! I had her sign my book and a copy of the full production notes I was given. 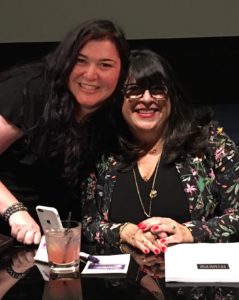 Then our manservants served us popcorn and more drinks, and we watched the unrated, extended DVD of Fifty Shades Darker. When we left, they removed their masks and all said “Laters Baby”.

The next day we awoke to rain. I planned on taking Raegan sightseeing until my flight at 4, but I woke up to my flight back to Atlanta being cancelled. The put me on one at noon with a few connections, but I had to race to the airport and leave poor Raegan in the city alone. (She still had fun). Well I get there, and the airport is closed! No flights going anywhere. I sat there for 9 hours, trying to get on 3 standbys, but finally got back to Atlanta around 11:00pm Thursday.

Where did I go? Straight to the bar. And guess who I found there? E.L. James! I flew all the way to NY to meet her and there she was! Luckily, I got her to sign the two extra books I got. 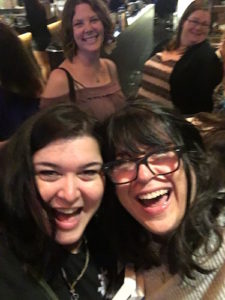 If you know anything about RK Lilley and TM Frazier and their husbands, you know that hanging with them is dangerous, but tons of fun. I also met a bunch of amazing authors including the very lovely Brittainy C. Cherry and Ruth Clampett and so many more. Plus I got to see Helena Hunting, Meghan Quinn, A.L. Jackson and so many more. 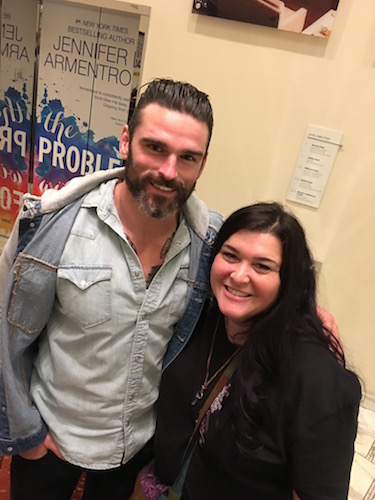 I’m not really into the whole model thing, but Stuart Reardon is on so many of my favorite covers!

The next day was the BIG book fair. That was CRAZY! Check out my live video here.

After that was another book event where they just SHOVED books and swag at you. It was CRAZY! 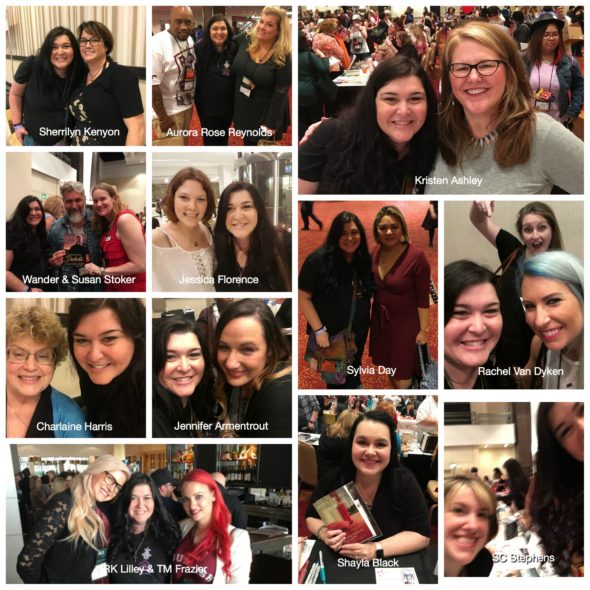 The last night was another bar night where I got to hang out with the lovely Anna Todd, the Lilley’s and the Fraziers until the wee hours of the morning.
On Sunday my son was passing through Atlanta, so he picked me up to buy 2 HUGE suitcases to fill with all the stuff I got, and he dropped me at my sister’s house where my other sister just happened to be visiting, so I got a family reunion in there too!
Seriously…RT, a Fifty Shades event in NY and a family reunion in 5 days. Now I want to sleep for a month.

I haven’t unpacked yet, so I’m not quite sure what I have, so this is for a mystery bundle with at least 1 signed paperback and lots of awesome swag. Stay tuned for lots more.
a Rafflecopter giveaway