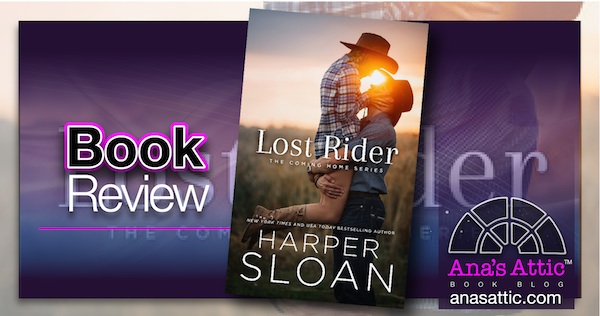 I am a huge fan of Harper Sloan’s writing. I loved her Corps Security Series, and her Hope Town Series were all 5 or more stars for me. While I don’t normally gravitate towards cowboy or western reads, I have read some that I really enjoyed, so I expected Harper to wow me.

Lost Rider by Harper Sloan felt like a traditional western romance. It was written really well, but it felt like it could have been written by a 70 year old in 1986. It was a romantic, swoony, sweet and sexy second chance romance, but there was nothing that stood out as special or unique. I felt like it was missing that Harper magic, and like it was an assignment to write the most traditional cowboy romance possible. I liked the book. It was emotional, I highlighted a ton of great quotes, and I liked the characters, but we were in the character’s heads a lot, and not much happened.

Ten years ago, Maverick Davis left town for good, and left behind a heartbroken Leighton. Leighton was his sister’s best friend, and she loved Mav for as long as she could remember. After spending that time as a champion bull rider, Mav got the news that he can never ride again and risk another head injury. So he headed back home for his father’s funeral after 10 long years and plans to stay.

“I don’t need to see those emerald green eyes to know that the face shadowed from view belongs to the only man I’ve ever craved more than Nanny Jo’s famous chicken and dumplings. I would recognize him in a pitch-black room. Well, I’ll be damned. Maverick Davis has finally come home.”

He was a total dick at first, but as we get to know him, we sort of understand why. The only two things, in his mind, that keep him together are riding and Leighton. Even if it’s been 10 years since he’s seen the latter.

“All I had wanted, my whole life, was to be the best damn cowboy the rodeo had ever seen, but all it took was once glance in her direction and none of it mattered anymore. All she had to do was walk into a room and I forgot it all.”

When Mav left, he cruelly broke Leighton’s heart deliberately thinking it would be easier that way, but Leighton took him back so easily! He deserved some torture after the ass he was.

“I’m on my way to having it all again, and hopefully, God willing, I’ll have it with this girl always by my side. This is my second chance at everything, and I’ll be damned if I fuck it up.”

Maverick was so sure of his feelings for Leighton, once he had her, there was no going back.

“We didn’t know it then, but these bonds were always unbreakable. It was just a matter of time before they snapped us back where we belonged. Together.” 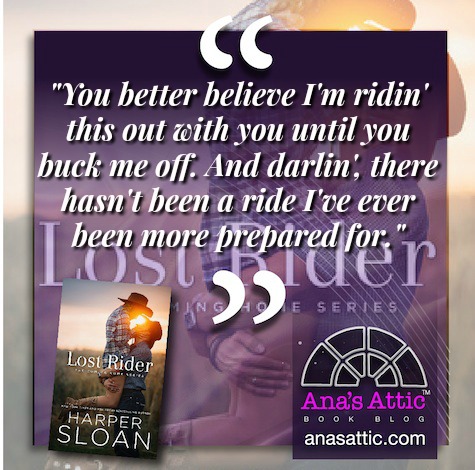 I think Lost Rider by Harper Sloan can appeal to any romance reader of any age if you like your books a little slower and more relationship-based. At one point during reading it, I put it down and read another book because Mav just said and thought all the right, perfect things–so much that I was rolling my eyes. I thought it might have been my mood, so I gave it a rest, and came back and enjoyed it much more. But to me there was just a lot of inner monologue when I prefer a little more action. I think 50 pages could have been shaved from the book and I would have enjoyed it a little more. I have to say, Mav was totally swoony and dreamy. I highlighted a ton of perfect quotes, but it felt like it could have been written anytime in the past 30 years. I missed the modern, sexy edge that Harper usually has in her writing. Still, if you like a traditional western romance, you’ll love Lost Rider. 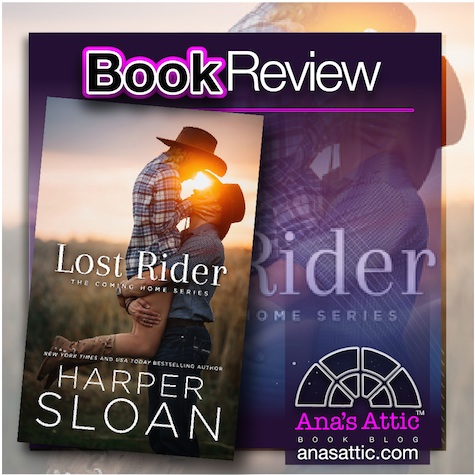