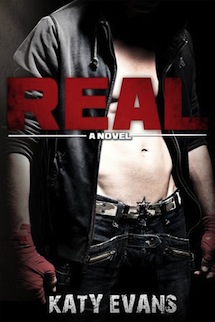 Holy Cow, Real by Katy Evans took hold of me and I fell in love on page one. I couldn’t put the book down. I had been hearing the buzz, and I had to see for myself. I saw it, I immediately thought “this is going to top every list” but as it went on, it lost a little of that initial WOW factor, and though I must say, I really did love this book, I had enough issues with it that it didn’t stay at a five star rating for me.

Brooke and her friend Melanie head out to an underground fight because Melanie is crushing on the star fighter, Remington “Remy” “Riptide” Tate. But when he sees Brooke, he’s hooked. He chases after her:

He steps forward, and his damp hand slides into the nape of my neck. My pulse skitters as he lowers his dark head to set a small, dry kiss on my lips. It feels like he’s marking me. Like he’s preparing me for something monumental. That could both change and ruin my life.

“Brooke,” he growls softly, meaningfully, against my lips, as he draws back with a smile. “I’m Remington.”

The attraction is instant and it’s MELT YOUR PANTIES HOT. Remy is everything we love in our alphas. He’s dangerous, possessive, scary, perfectly gorgeous, and totally, head-over-heels crazy about the heroine, and needs her like he needs air.

Brooke is a physical therapist and Remy hires her to be his personal one and travel with him for three months. Brooke’s vagina is a clenching machine!!! Seriously, this girl gets wet and has her pussy clenching non-stop. Honestly, I don’t blame her, but there was a lot of talk about how amazingly hot he is and how wet and clenchy and achy she got every time he was near. I hope she wears a pantyliner, that thing could get infected! Seriously though, my vagina was kind of clenching with hers, so there.

“He tugs my earlobe with his teeth, licks the shell of my ear, and has forgotten all about playing music for me. While I shudder wantonly, wet and squirming as I keep glancing at his jeans, which burst with the fullness of his erection. The volume straining the denim is so staggering that my hands itch, my tongue wants to taste him, lick him, my pussy clenches in desperate desire.”

The fact that  Brooke has to touch Remington for physical therapy is killing her. She wants him, they cuddle, but he wants to make sure it’s MORE.

“Why’d you want to have sex with me? To have a fucking adventure? What was I supposed to be? Your one-night-fucking stand? I’m every woman’s adventure, damn you, and I don’t want to be yours. I want to be your fucking REAL. You get that? If I fuck you, I want you to belong to me. To be mine. I want you to give yourself to me—not Riptide!”

And let me tell you, the sexual frustration was through the roof! The first 50% of the book was hot foreplay, but the second half made up for it.

Remy is volatile and moody to say the least. He isn’t great at communicating what he feels, except for using songs. With 20,000 songs on his iPod, he has a lot to choose from.

“You tie me up in knots. I want to play you a thousand different songs so you can get a clue of what… I feel inside me…”

I loved this part. I thought it added such a wonderful dimension to the story. I have a recommendation here. Even if you know the songs, highlight the artist name and song title, select google, and you can listen to the song and read the lyrics right there on the page. 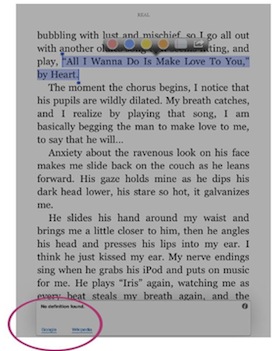 Then, despite my still loving the book, I started having some issues. I felt like this was originally a paranormal book and most paranormal references were taken out. This guy is basically a shapeshifting lion in human form. And perhaps Brooke was too. 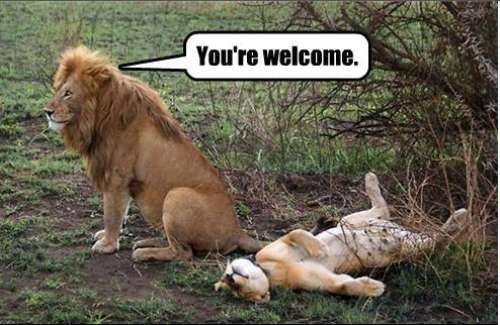 He “scents” her constantly. His eyes change colors. His moods and personalities completely change. Her “mating” instincts come out often, as does his, he doesn’t remember the change, they lick and pet each other.

“Tonight we’re both naked and deliciously entangled, and my sexy blue-eyed lion now seems content to have petted me for a long while, until I feel groomed down to my bones”

“He smells my neck and then buzzes the back of my ear, and whispers into me, “You’re my mate, and I’ve claimed you.”

Besides that, there was a difficult subject tackled in this book that was not researched well, at all, and discussing “an alternate gene expression” is just pure crap. Alternate genes means shapeshifter!

Despite these and a few other dislikes, my overall feel from the book was actually pretty fantastic. Had this been a paranormal book, I don’t think I would have had too much negative to say. I ate it up. It has all of the things I love in a story.

I totally recommend the book, if not just for Remy. He is one of the most delicious, damaged bad-boys there is. But he is basically described as a beautiful exotic beast. So basically, this is the story of Beauty and the Beast. Had it been described as a fantasy, this book would be a 4.5-5, but as a more realistic contemporary, I had a bit of a hard time.

I need him close, so I press my body to his as I drape my arms around his neck, his sweat slicking deliciously into me. “Not my screw-up. My real.”

Real is the first in a five part series called Real, Raw and Ripped. The next book is “Mine” expected in June, and book 3 is “Remy”. Melanie will get her book in book 4.

See the Real Raw and Ripped Series with Pre-Order Links