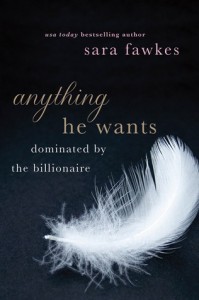 Anything He Wants (Dominated by a Billionaire) was originally a 5 part serial novel. After buying the first, which was ridiculously hot, I was annoyed that it was just a tease and to get the rest, I would have to pay $2.99 for each additional 40 pages. But it stuck in my head. Upon request, Sara Fawkes, the author sent me 2,3 & 4 and I purchased #5.  The 5 installments have been picked up by a publisher and are now being released as a regular novel on November 27.

If you liked Fifty Shades and Bared To You (Crossfire Series), this has a similar storyline in that it is about a billionaire Dom who begins the relationship with an agreement. Lucy is a temp, and sees a gorgeous man in the elevator every day. In fact, she makes it her business to be on the same elevator with him daily. One day, the two are left alone. Jeremiah stops the elevator, and they have one smokin hot scene right there, and they don’t even know each other. Then on her way home she is grabbed in the garage for another scorching encounter.

The next time she sees him, she is escorted to his office, only to find out that he is the CEO of Hamilton industries; billionaire tycoon, Jeremiah Hamilton. He says he is letting all temps go, but she can have the job as his “personal assistant”. Guess what the job entails? ANYTHING HE WANTS.

Lucy is enraged but has no choice. She is whisked to Paris with him immediately, and finds that as mad as she is, he body still can’t resist him. Their relationship develops, but is soon cut short by an attempt on Jeremiah’s life that almost kills Lucy.

The rest of the book is a little more of the action adventure variety. We don’t know who is behind the attempt, and Jeremiah (an ex Army Ranger and sniper) is busy trying to protect Lucy without telling her anything. There is guns, kidnapping, bombs, heads blown off, traitors, and more.

Then after buying all 5 books, the story ended on somewhat of a cliffhanger. The author is writing more, but this time, she has listened to her readers and will be releasing the rest of the story as a second book, in its entirety, not as a small serial.

I really enjoyed the story. I think the format influenced the writing a bit, because it felt a little choppy, and I would have liked another chapter or two in there to show the couple growing closer before all the action began.

I have started mixing up my billionaire corporate Doms. In the last month alone, I have had Gideon Cross from the Crossfire Series, Ian Noble from Because You Are Mine, and Jeremiah Hamilton from this story. They are all tycoons with private jets, and they are all Doms, and they are all getting a little mixed up in my brain.

Anything He Wants: Dominated by the Billionaire Novel (all 5 with some extra)
(pre-order for November 27, 2012): Amazon || BN/nook || iBooks