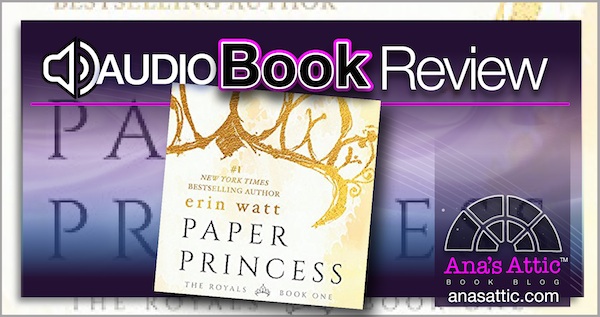 Paper Princess (The Royals Book One) by Erin Watt

Young Adult with New Adult Themes. Does Not Stand Alone.

The Royals Series by Erin Watt seemed to be on so many favorite lists for 2016 that I picked up the first, Paper Princess when it went on sale to see what all the fuss is about. I actually read a few pages over someone’s shoulder on a plane this fall and it caught my eye. I should preface this review by saying I bought this solely from popularity. I didn’t read the blurb or reviews first. I saw Royals and Princess, and after reading and enjoying two other ‘Royal’ type books this fall, I figured I’d really like Paper Princess.

To be honest, it read like a YA stepbrother book. While I enjoyed it, I found nothing unique about it, and Royal was a last name. It wasn’t about Royalty at all. It seemed to be a mashup of every New Adult book out there

Ella’s mother died. She had been sick for a long time and Ella took care of her, helping to pay the bills by stripping at 15. When her mom died, Ella was almost 18, so she didn’t let anyone know because she had no living relatives and didn’t want to get put into the foster system. Until one day she gets called to the Principal’s office where her new guardian was waiting. Turns out, her father, who she never knew about, was a billionaire who had just found out about her before he died in a tragic plane crash. His best friend and business partner, Callum Royal, stepped in to be her guardian.

She was ripped from everything she knew to move and live with this new family she never heard of. And they were going through their own problems. Callum had 5 very large, intimidating sons who seemed to hate her on sight. They recently lost their mother and didn’t need more change in their lives. The 5 handsome boys went to a private school that they totally ruled, and couldn’t have this low-class stripper smearing their name.

“The Royal boys are not what I expected. They don’t look like rich pricks in preppy clothes. They look like terrifying thugs who can snap me like a twig.”

At first they were so mean, even thinking she might be sleeping with Callum for money.

“You should know whatever game you’re playing, you can’t win. Not against all of us.If you leave now, you won’t be hurt. If you stay, we’ll break you so bad that you’ll be
crawling away.”

“I don’t belong in splendor; I belong in squalor. That’s what I know. It’s what I’m comfortable with, because squalor doesn’t lie to you. It’s not wrapped in a pretty package. It is what it is.”

But she worked her way in, and one son especially, Reed, took a big interest in her. Since she was being raised as part of their family, her sleeping with her “brother” was totally taboo. But the chemistry between them, no matter how much they resisted, was undeniable.

“You may have lost your family, but you’re not alone anymore, Ella. You’re a Royal now.”

The thing is, The Royals are more messed up than you can know at first.

“I feel the need to warn you that, we Royals are pretty fucked up. We’re good in bed, but out of it? We’re like a stage four hurricane.”

But Ella has an awesome backbone. She is tough and spunky and can fight for herself.

“You’re playing a dangerous game…”
“I don’t know any other way to play it.”

Even though he’s an asshhole, Ella can’t resist Reed. (Insta-lust/teenage hormones played a big part). Reed was the meanest one to her, yet she can’t help but want him, even though every other girl has had him.

“These Royals will ruin you.”
“Maybe I want to be ruined.”

There was so much teenage angst and drama! And these kids were like no high schoolers I’ve ever seen. We live in a wealthy area and I have subbed at the private prep school around here. It just isn’t this bad, the kids are still kids. It was a lot of drama for drama’s sake.

As I said earlier, it seemed like every YA/NA trope there is mashed together. Damaged boy who lost his parent, damaged girl who lost hers, new school with mean kids, rags to riches, stepbrother, hate to love, drugs, date rape, cage fighting, gambling, virgin with manwhore, insta-lust and so much more. And then it was a cliffy! Sorry, but although I found it strangely addictive, I will not be reading more.

“Reed Royal has broken me. I’ve fallen from the sky and I’m not sure I can get up. Not this time.”

If you like YA/NA books (they are in high school, but there is sex and New Adult themes) filled with tons of angst and drama, you will probably love The Paper Princess. Everyone was just too sad, broken, mean and dramatic for me. I felt like it took every New Adult theme and added them together for one big story. The story was a touch addictive, but I found myself rolling my eyes a bit too. Perhaps late forties isn’t the demographic for this, but there are plenty of other books with characters this age that I absolutely love.

I should tell you, most of my fellow bloggers LOVED Paper Princess, so I am definitely in the minority here. If it stood alone, I would rate it higher probably, but I am sure not willing to invest in 2 more audiobooks to complete a series that I wasn’t in love with from the start. 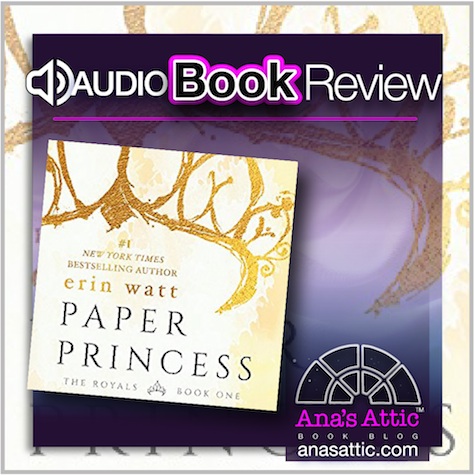