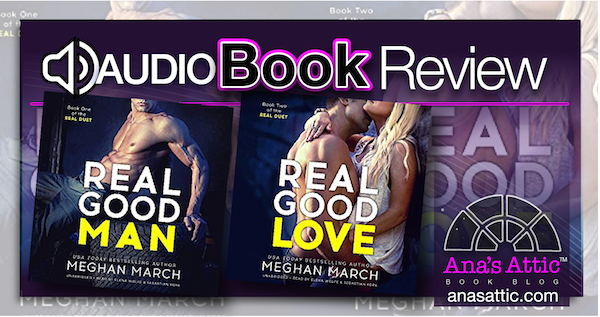 There is a reason that Meghan March became a new favorite author for me in 2016 and Real Good Man and Real Good Love are perfect examples of why. It had everything I love in books, a manly alpha man, humor, dirty talking, romance, believable love, banter, awesome sexy times, and very likable characters.

Banner Regent (love the name) is Greer’s (from Dirty Girl) best friend. She is a New Yorker through and through. Being from New York myself, I got her. She was no virgin (at all). She has had a full sex life, and had no desire for a relationship. She was accidentally texted by Logan (who is friends with Holly from the Dirty Billionaire books who is married to Greer’s brother), and they began a text friendship. She would tell him about the wimpy loser guys she dates and they would have fun laughing about them. Logan is a mechanic from KY, so Banner felt perfectly safe texting, she knew they’d never meet, and she wouldn’t have a chance to screw up their friendship.

“Logan is supposed to stay inside my little magic box of a phone where I feel like I’m still in control, because the second he becomes real, as in flesh and blood, all bets are off.”

When she drunkenly flirts with him, Logan decides to take a trip to New York to meet the mystery woman he has formed a relationship with.

“You have to meet him. I mean, you can’t miss this chance.” “
I can’t! I’m going to screw everything up, and then—” I cut myself off before I can admit that it’s going to suck so much major donkey dick if I lose him in my life. Even in this short period of time, I’ve gotten attached to whatever we have.”

But when they meet…instant heat.

“…you’re so fucking far out of my league, I should be back in my truck heading for the highway.”
My mouth drops open. “I’m out of your league? Have you not seen yourself? Do they not have mirrors in Kentucky?”

Until she screws it up with him big time. And soon enough, she screws up at work and loses her job and apartment. Greer hooks her up with housesitting for Holly in…guess where? Small town, KY. Where everyone is in your business, and the guy she messed up with is the most eligible bachelor in town.

Logan has a fan club of women who will do anything for him, but he doesn’t like to shit where he eats. So when Banner comes to town and catches Logan’s attention, she gains the hatred of half of the female population. Not the best start. But it was a start over for Logan and Banner.

“So where do we go from here?”
“We’re going to get to know each other. I’m going to take you out on dates and show you what we both have been missing. You’re going to fall in love with me, Banner. That’s where we’re going from here.”

The thing I liked best about Banner, besides her spunk and strength, is this:

“I never have to wonder what the hell she’s thinking, or if she’s got a hidden agenda, because she’s got no filter and has no problem telling me exactly how things are.”

There is no shortage of sexy times, and Logan is a real alpha who works with his hands (and tongue and everything else lol), and his alpha dirty talking is so hot, even with a strong independent New Yorker like Banner.

“I don’t like being told what to do unless I’m naked.”

Let me tell you, the car scene (fans self)…

The second book had a lot of characters and outside of the romance situations which kept up excitement and interest, but I missed more of the love story a bit. Still, it was a fun and exciting story. 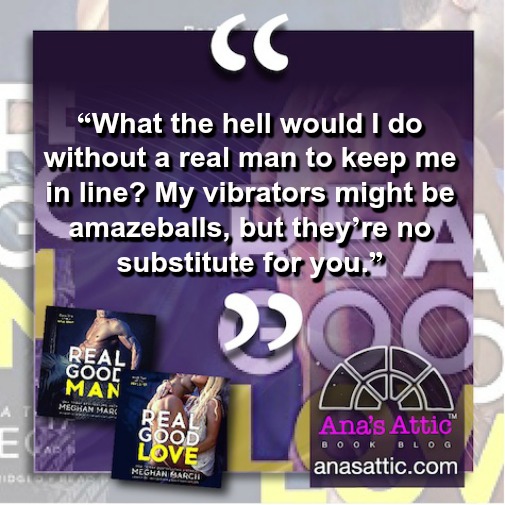 Real Good Man and Real Good Love are great examples of the reason I love reading. Narrated by my two favorite narrators, it made it even better. Banner is one of my favorite female characters ever because she is tough, never sneaky (in a bad way), and never played games. There was a ton of banter and humor, and even more dirty talking and dirty doing! Logan was a real man who fixes things and ran his business and I thought it was hot as hell. Something held me back from loving it as much as Dirty Girl and Dirty Love, but all in all, I loved this duet. I’m thinking Boone may be the next series? I hope so, but I hope it’s just one book, not split in two, the one major complaint I had about this. 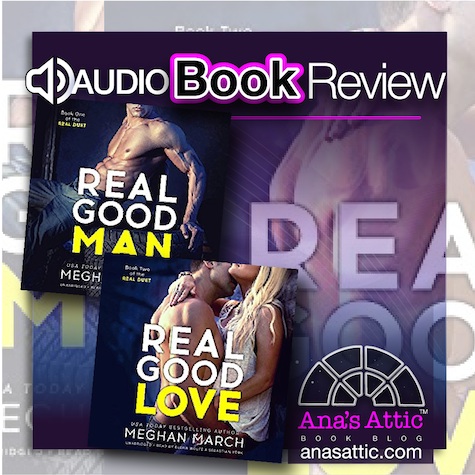