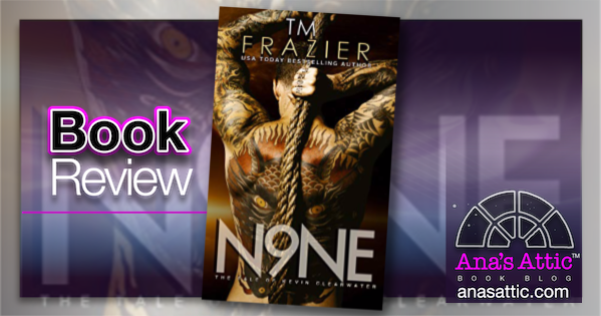 “Sometimes you gotta burn shit to the ground to appreciate the beauty in the ashes.” 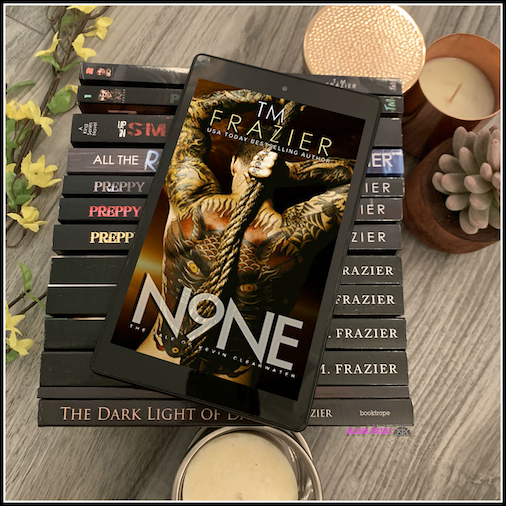 Every book was starting to run together. I had to put down a few books recently because they had the same trope as one I was listening to. Then Nine by T.M. Frazier landed on my Kindle and I quickly remembered why I love T.M. Frazier so much. Her world is so different than any others I read about and I absolutely love visiting this world where the anti-hero is absolutely the hero.

At 17, Kevin aka Nine ran away from the foster system that had failed for his entire life. That night he met “Poe” on a bridge. Nine shared his first kiss that night and promised to live his life for her sake.

Umbeknownst to Nine, “Poe”, aka Lenny survived the night but got mixed up with an asshole who stole from King’s organization and blamed it all on Poe. When they meet again years later, the connection between Nine and Lenny is like a live wire that jumps off the page.

“Lenny and I are both hurricanes, on a course for collision, and who the f*ck knows what’s going to happen when or if the skies clear.”

Both characters are such contradictions. With a really bad childhood and a very violent (when necessary) job, Nine is still a genius with a side of him you can’t help but love. And Lenny, despite growing up on the right side of the tracks, has had a really rough go of it, and she is perfect for Nine.

“Hear me when I say that you are more than one thing. A person can be both sensitive and heartless. Both selfish and selfless. Quiet and loud. Fearful and bold. Jealous and proud. A killer and a savior. Flawed, yet perfect. We can love and hate in equal measure. We can be crazy sometimes and sane in the next.”

“Because you aren’t one thing. You can’t be, because you’re everything.”

Nine is absolutely Preppy’s brother, but he is his own man as well. But it did take me a bit to reconcile the “little brother” with the sexy man he played. I promise, in the end, Nine is as much a man as King, Bear and Preppy. Speaking of Preppy, we were treated to a perfect amount of him. He could have easily dominated the story, but T.M. Frazier gave us just the right amount to satisfy without taking over.

“Sometimes, you gotta almost die to remember that you’re alive.”

Being back in Logan’s Beach was an awesome ride. T.M. Frazier’s books are gritty without really being dark. Her world building is amazing, and it’s so easy to suspend reality and just enjoy the ride.

“Love is a two-sided sword that cuts at every turn. I know this because Poe’s edges are sharp, and my heart is sliced to fucking shreds.” 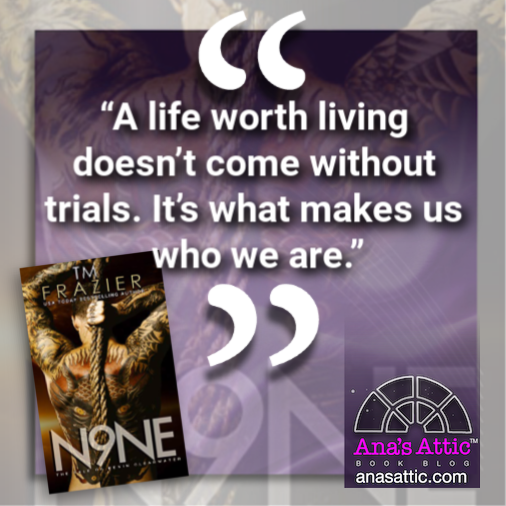 There is a reason T.M. Frazier is one of my top favorite authors. She brings a completely unique voice to a very crowded genre. She has built her own little niche style that lies between MC, dark, action/suspense, and comedy, but it is very much her own. Nine was a wonderful addition to the King series, though it can be read alone. However, there are spoilers for the King Series and after reading this you may want to binge, so be forwarned. When going back through some of my reviews this year to see who had the highest ratings, I noticed it was authors who I have loved for years, so I actually really tried to find more fault with Nine. But honestly, I couldn’t really find a flaw, I just loved it from start to finish. 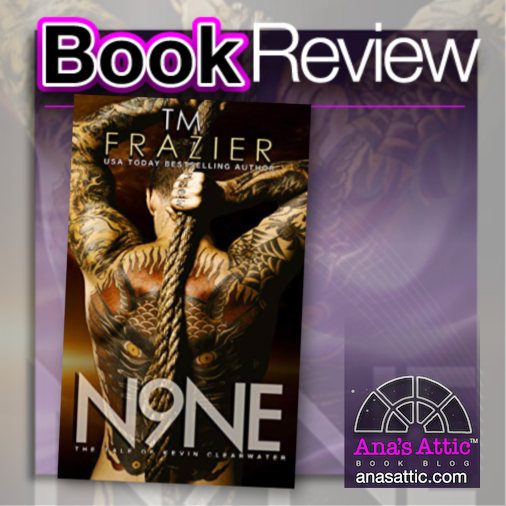