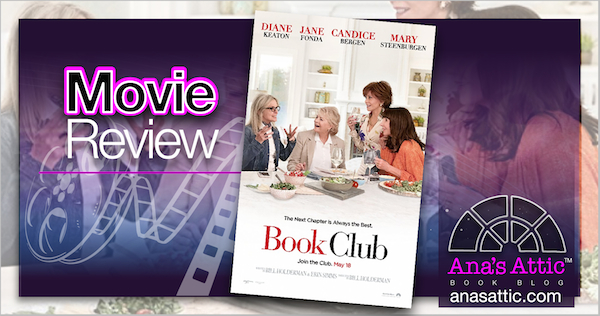 We went to see Book Club with a group of 10 of us ranging in age from 30 to 53. We are all book lovers, and we are all fans of Fifty Shades. We also all met EL James last month when she came to Wicked Book Weekend! Many of us saw the preview for this movie when we went to see Fifty Shades Freed together and have been planning this night ever since. So as you can imagine, we were excited.

With a cast that reads like a Who’s Who in Hollywood and a subject matter so near and dear to our hearts, we had very high expectations, and let me tell you, Book Club did not disappoint any of us. The movie didn’t really delve into the Fifty Shades series. I don’t think you had to have read it to get it ( <— I’m a poet!), but there are a number of little jokes if you are in the know, including a cameo by someone very special that had us all cheering.

Book Club is about four California women in their 60s who have met every month since they were in their 20s to drink wine and talk books. I think that was the real story behind the story that I loved. They had a loyal, drama free friendship that spanned 40 years. Think of this kind of like Sex and the City with older women.

Vivian: “Hi, beautiful friends. I would like to introduce you to Christian Grey.”
[She hands a copy of Fifty Shades of Grey to each woman]
Sharon: “Oh, no. We started this to stimulate our minds.”
Vivian: “From what I hear, this book is quite stimulating.”

Diane Keaton plays the recently widowed Diane (who I must say, we kept saying “what is she wearing?”) who has two adult daughters (Alicia Silverstone and Katie Aselton) that treat her like she has one foot in the grave, pushing her to move to Arizona to live in their basement. Jane Fonda plays Vivian, a single-for-life hotel owner who always looks perfect and hot (holy hell, she is 80 in real life and looks AMAZING), and likes casual sex with no entanglements. Candice Bergen plays Sharon, a federal judge who hasn’t been with a man at all in the 18 years since she divorced her husband. Mary Steenburgen plays Carol, a chef, and is the only married one of the group. The problem is, her newly retired husband (Craig T. Nelson) hasn’t had sex with her in 6 months. 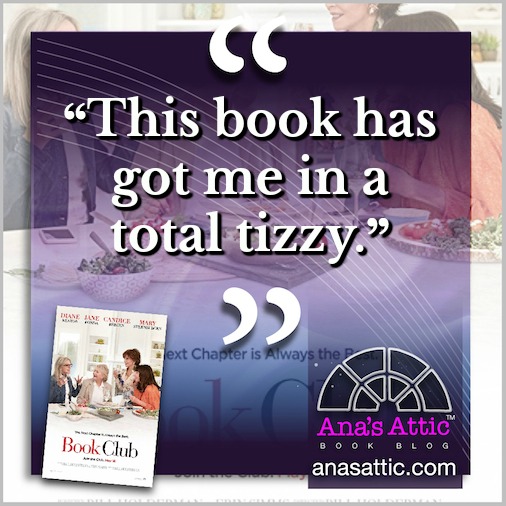 When Vivian brings Fifty Shades of Grey to her week for Book Club, at first the other women were against it. But as they read, they each rediscovered their own sexuality and/or need for love and companionship. Maybe it was all of their “inner goddesses” that came to the surface. Diane meets a sexy pilot played by Andy Garcia, Vivian hooks up with an old love played by Don Johnson (oh my, he is still a total hottie, and they made a gorgeous couple), Sharon joined an online dating site, and after 18 years, went on her first date with George, played by Richard Dreyfuss. Carol and Bruce were happily married, but something was missing and nothing Carol tried worked to spice things up, but there were some really funny attempts!

“I could have put him in jail for any one of those things.”– Sharon on Christian Grey

Book Club was a fun and easy way to spend the night. The cast alone is reason enough to see this movie. Compared to the Fifty Shades books, don’t worry, Book Club is very PG, so don’t be afraid to go with mom or even grandma to the theater. I think women of every age will enjoy this story of friendship that shows that you don’t have to stop living life and looking for love because you are over a certain age. It’s a great movie for girls night out, but the guys will enjoy it too! My parents (80 years old) went and my dad loved it even more than my mom did.

I don’t feel like I can really give a rating to a movie because I so rarely go, so I don’t really have a rating scale in my head. But as for me, I loved it. Did it blow me away? No. But it’s not supposed to. Think of it like a coming of (retirement) age Sex and the City. It was light and fluffy and fun with a not-so-subtle message that it’s never too late for love. 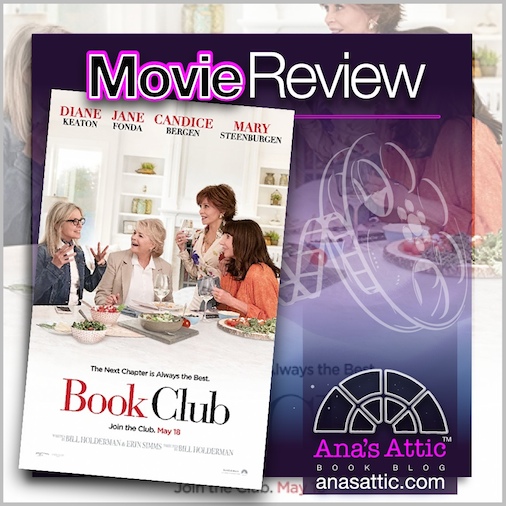