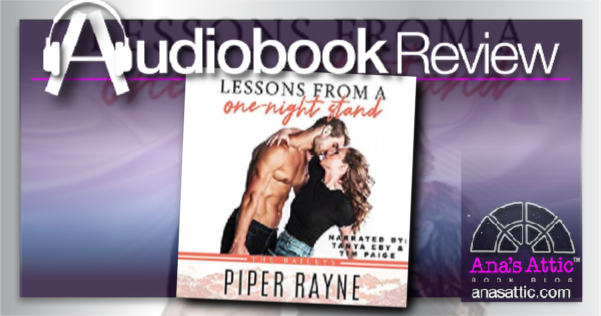 Looking for a quick review? Scroll down to the Down & Dirty!

I had Lessons from a One Night Stand by Piper Rayne on my TBR list for a while and just couldn’t get to it, so I was thrilled when it came out on audio. As soon as I started listening, I knew this would be a good one. 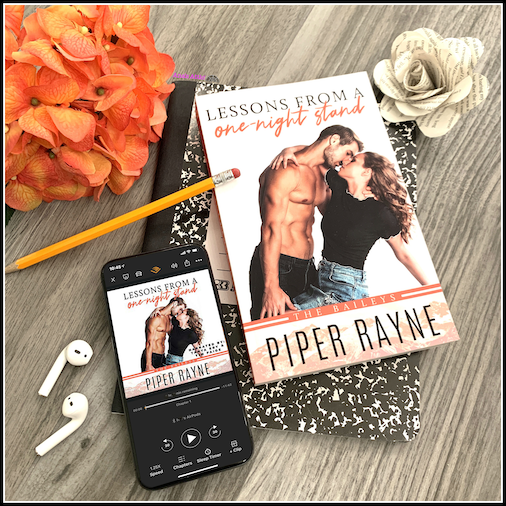 “I was forced to become who I needed to be, not who I wanted to be.”

Austin is the oldest sibling in the Bailey family, the family that basically put the small town of Lake Starlight, Alaska on the map. Sadly, 9 years before, his parents died, and at 21, he became the guardian for his 7 youngest siblings, while his sister took over the family business. At 30, Austin is a high school teacher and coach, putting his dream aside of coaching at the college level to raise his family. The youngest twins are now high school seniors, so he may still be able to pursue his dream, just 9 years later.

Holly Radcliff is filling in as principal covering for maternity leave. What she didn’t expect was to be introduced to the school as the new principal by none other than the one-night-stand she had the night before. 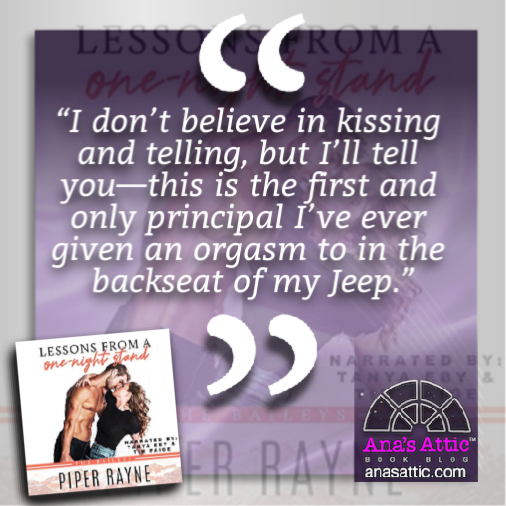 While the concept of the story was not overly unique (in fact, I started to read another book while listening to this that I had to stop because it was so similar), the characters were fun and relatable and I really enjoyed the family dynamics. It was an addicting story and I was fully invested right from the start.

“You’re Trouble”
“Only the best kind”

Holly and Austin had fantastic chemistry right from the beginning, but they had a lot of obstacles to overcome. They both plan on leaving the small Alaskan town when school ends.

One of the things that makes me love a book is when I love the heroine, and I really really liked Holly! The couple was easy to like, it was a fun, light, addictive listen.

I really enjoyed both narrators and felt they both fit the roles they played well, and vocalized the opposite sex well also.

I really enjoyed Lessons from a One Night Stand by Piper Rayne. Though having a one-night-stand and they turn out to be your new boss is a trope I have read numerous times before, Piper and Rayne made it feel fresh and unique. I really enjoy their writing style, and I truly had a lot of fun listening to this book. I found myself with a goofy smile almost the whole time, and loved the main characters. I look forward to listening to more from Piper Rayne!

Purchase Lessons From a One Night Stand by Piper Rayne 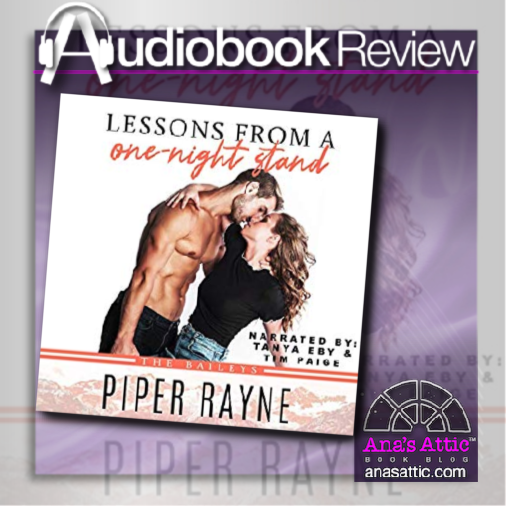