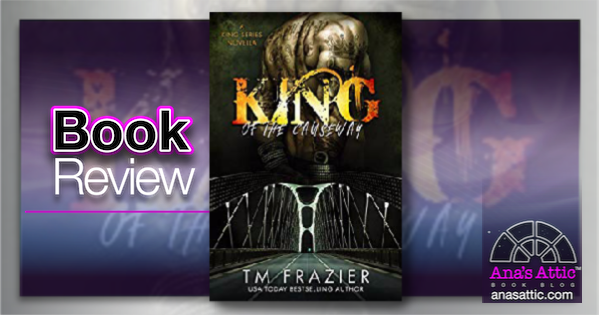 King of the Causeway (King Series 9.5) by T.M. Frazier

Novella. Does not stand alone. Contains spoilers for previous books in the series.

“It’s a tale as old as time. You know, girl with no memory offers herself to boy as a hooker hoping for safety. Boy rejects girl, then kidnaps girl. Then, girl runs away; then boy decides to keep girl. Boy and girl fall in love and have dirty sex and get tattoos.” 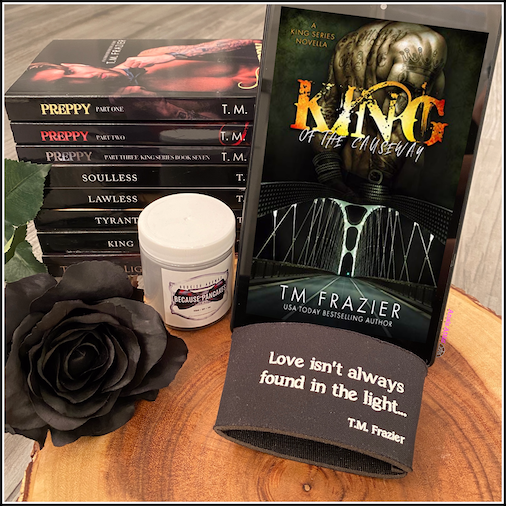 King, Doe and the rest of the gang are back and there is trouble coming to Logan’s beach. Since I have the worst memory ever, as much as I adore the King Series, I didn’t retain details. Luckily T.M. Frazier gave a nice little recap of what I may have forgotten.

“We’ve been together for years. Three kids and one on the way, and I still tremble at his touch. They say lust fades with time. Well, they don’t know shit.”

King and Doe’s marriage is strong, but something is going on with her. She is a month away from giving birth to another baby, but something has changed, and King can’t fix what he doesn’t know.

“I’ve been stabbed and shot, but my wife not feeling like she can be honest with me hurts a fuck of a lot more than a bullet piercing through skin and muscle or a jagged blade jutting against bone.”

Not only is Doe having some difficulties, but there is a big Hurricane headed towards Logan’s Beach, as well as a new threat in town, and he is trying to take King’s place as “King of the Causeway”. Despite this being a novella, there is plenty of excitement with this new threat as the crew goes all-out to protect what’s theirs.

At times it may have gotten a little cheesy—it was like a reunion book with a visit from so many previous characters, including everyone’s favorite.

“Guess who? I’ll give you a hinty-hint. I’m as handsome as a supermodel, and as devilish as, well, the devil. I get a hard-on for both pussy and pancakes. I like my blow with a side of blow, and my man meat is enormous. That’s right! It’s me, Samuel Motherfucking Clearwater.”

But I didn’t mind a little cheese in the form of Preppy. Besides the action from the external threats, I really loved that Tracey came back to what was really important…the connection between King & Pup. 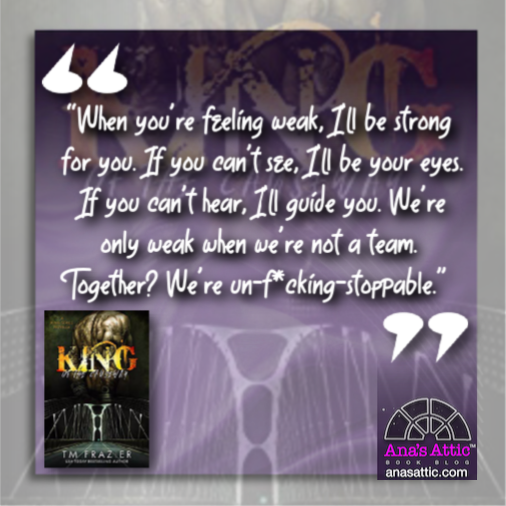 King of the Causeway by T.M. Frazier came at a perfect time to bridge the gap between NINE: The Tale of Kevin Clearwater and Pike coming in a few weeks. It refreshed my memory of all the players in Logan’s Beach, and reminded us of all of their back stories while still having a LOT of action, romance, and connection between the couples and with their friends. I’m actually amazed that Tracey was able to fit so much into a novella, and it absolutely did as intended—got me even more excited for Pike’s story.

“I’m behind you. All the way. Always.”
King shakes his head and lifts my chin so my eyes meet his. “No, Pup, your place isn’t behind me. It is, and has always been, beside me.” 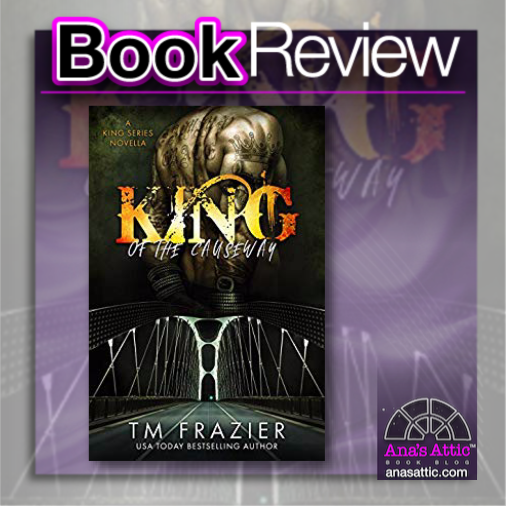