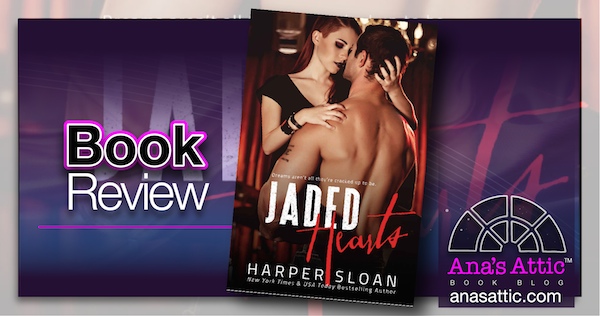 Harper Sloan is one of my favorite authors, and the Hope Town Series is one of my favorite series, with all three books being 5 stars (or more!) so as soon as I heard that Cohen’s friend would be starting a new Rock Star series, I was immediately desperate to read it, despite so much time passing that I didn’t remember Chance beyond his name. And that’s OK, because Jaded Hearts stands alone.

“I’m Wrenlee Davenport, lead singer of Loaded Replay. I’ve learned the hard way that plenty of people in the world would love to have a piece of me, but they don’t give one shit about the person behind the voice.”

Wrenlee fronts one of the hottest bands out there, with her twin brother, Wes, and super close friends, Luke and Jameson. Her only other friend in the world, Dyllan, is her makeup artist. Beyond that, she is isolated. Her parents were horrible people who are out of the picture, and getting close to anyone else is a mistake, because everyone wants something.

Wrenlee has been the target of a stalker, and their shitty record company who is working them to the bone with no breaks refuses to send adequate security, or even security that doesn’t want to get in her or the groupies’ panties. When things start getting more dangerous, Wes decides he is going to get his own security for her, and calls the best, Corps Security in GA.

Ex military, Chance proves within 1 minute how capable he is of protecting Wren, and it’s so hot how proficient he is! He also catches Wren’s eye immediately.

“He’s hot. Like really hot. Tall, he’s at least six-foot-four—seeing as he stands taller than my brother—with a trim runner’s body. Good God, he’s beautiful….
You can tell the man isn’t hard, but my guess is he’s just … gifted. Damn. I fight not to squirm in my seat. Whoever this guy is, I wouldn’t mind unwrapping the present he promises to be. He looks like he belongs on the cover of one of those corny romance books Dyllan is always reading.”

Since their contract says they can’t hire security themselves, they just let everyone assume they are lovers, and neither one of them complains about it. Despite them each having crappy backgrounds, there was no doubt they both wanted each other.

“When I see him wink, I know I’m done for when it comes to Chance Nash.
One way or the other, I will have that man.”

They both wanted each other, and though there was a tiny bit of reluctance due to past fears, there wasn’t much, and that was kind of my only issue with Jaded Hearts. It was all too easy, while I don’t usually crave angst, I kind of felt like nothing was happening. There was no conflict except with their record company, and even the danger was forgotten for almost the entire book. It was sweet, and you were able to see a lot of character growth, and the intense attraction between the two, but I needed a little more action.

If you follow Harper Sloan on social media, you know her love for Lularoe and Lipsense, and she wrote them into the book in a major way that had me laughing out loud.

“Get these pants off me. I don’t even care that they’re unicorns and a print I had to hunt down because all those eager bitches always steal the best ones first. Cut them off now. Cut them off!”

The end of the book really picked up for me, but it felt a little rushed to me. It didn’t seem to build throughout the book to the climax, it built, changed focus for most of the book, then came back at the end. Don’t get me wrong, I loved it, but I wish the angst and excitement were stretched out a little more. 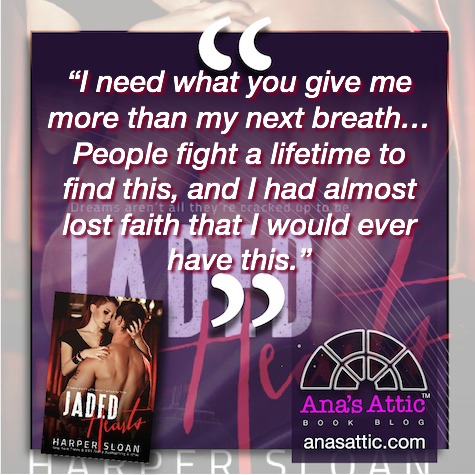 I have ridiculously high expectations for a Harper Sloan book, especially one that spins off of one of my favorite series ever. I really enjoyed Jaded Hearts a lot, but it didn’t quite live up to my expectations. I felt like nothing really happened through a lot of the book, and I was wanting some action or some angst. It was just too easy for the couple; neither of them even stood in their own way with doubts, they were very sure of their feelings right away. With a stalker on the loose, a little action through the story causing tension and fear to build would have been welcome. Instead, the threat basically disappeared through the story. I loved the characters, I loved Harper’s writing, but I just felt like I wanted a little more action or tension in the book to make it a true 5-star read that had me watch a couple’s struggle and then see them come out stronger in the end. I still loved it though, and totally look forward to the rest of the band’s books. 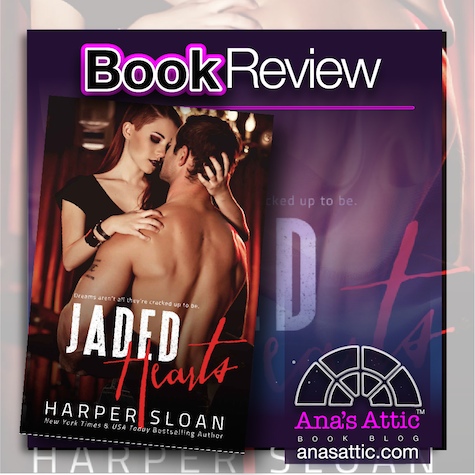