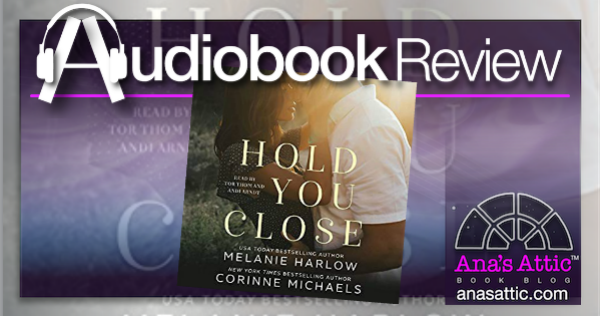 Hold You Close by Melanie Harlow and Corinne Michaels

Corrine Michaels has been on my TBR for a long time and I have loved the Melanie Harlow books I have read. So when I saw the two were doing a collaboration, I couldn’t wait to get my hands on Hold You Close. While I had other commitments, this audiobook was burning a hole in my phone, yelling ‘LISTEN! This is gonna be book of the year!’ (Yeah, so my phone talks to me, yours doesn’t?) The writing was absolutely flawless, and I never would have known there were two authors. Sadly, the rest of the book didn’t live up to my expectations.

Ian is Sabrina’s older brother. London is Sabrina’s best friend. London was in love with Ian her whole life. When he stepped in to take her to prom they both professed their love as she lost her virginity. But London wanted to give up her scholarship to her dream school to stay with Ian—so he dumped her the next day.

“Sometimes, you have to let go of what you want more than anything because it’s the right thing to do.”

London spent the next 18 years hating him. He never told her why he did what he did, just went on letting her hate him even though they lived in back to back houses and both loved Sabrina and her kids. He married and divorced. He became a total player and a total asshole. Meanwhile, she was a workaholic spinster.

“I waited my entire life to feel the way I did when I was with him. I never married or had anyone serious because no one could measure up to Ian”.

Then the unthinkable happens, and they are forced to raise Sabrina’s 3 kids together.

“Once again, he’s reminded me why I loathe him. This is what we are. We fight. Claw, scratch, and tear each other apart. He’s an asshole and I’m a bitch. We bring out the worst in each other. It’s been this way since…I let him in.
One mistake.
One night.
One thing that will never happen again.”

OMG, three children just lost their parents and these two assholes are fighting like children over one night 18 years ago. Yet he still doesn’t tell her. It was all about these two fighting and being selfish assholes to each other rather than these three grieving kids, who played way too small a part.

“The thing about love is that it’s irrational and stupid. I work with statistics and analyze hard data – I weigh probabilities and risks, and think in truths and facts.
Truth – Ian broke my heart.
Truth – Ian is the man I’ve never gotten over.
Fact – Ian is a selfish player who doesn’t give a shit about me.
Fact – I want to rip his clothes off and fuck his brains out.”

The sexual undercurrent was there, but at first, not so much, he was too much of an asshole.

“The next time I kiss you, London Parish, it’ll be because you beg me to.”

But it did ramp up, and there was definitely some sweet.

“I will always fight for you, London. Even when you pull away, I’ll hold you close, because this is where you belong – with me.”
“Always?”
…”Always.”

“Ian is the gasoline and I’m the match…when we connect, we could start a forest fire…”

And Arndt, as always, did a great job. I love the way she does kids especially. Tor Thom was a new narrator to me, and I LOVED him!

This review kind of makes it sound like I hated the book. I didn’t. At no time did I think “I’m not enjoying this, I want to stop”. But I also got annoyed and frustrated with the characters and never found anything I really loved. I actually got way more annoyed at the book while writing this review than I did reading it, but let me repeat my first dislike in case you only read my Down & Dirty: For EIGHTEEN YEARS this couple has HATED each other even though they are neighbors and co-godparents. All he had to do was tell her why he broke up with her. And she lived like a spinster for 18 years because nobody could live up to her high school crush? Oy, it sounds even worse when I write it out. The authors seem to write well together, and if they do it again, I’ll try again, but Hold You Close was just an OK read for me.

Purchase Hold You Close by Melanie Harlow and Corinne Michaels 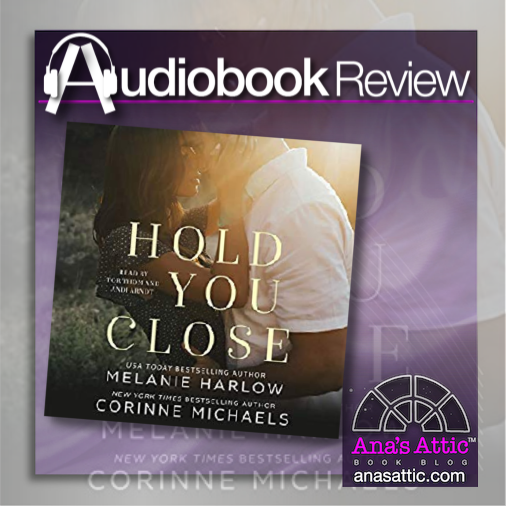