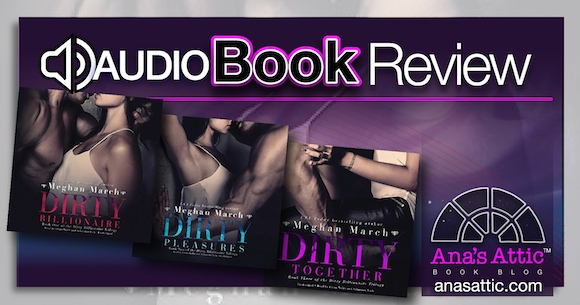 Normally I stay away from books with Billionaire in the title (been there, done that), and I really shy away from a trilogy. I have too many books I committed to to read three. But after reading the spin-off of The Dirty Billionaire series— Dirty Girl & Dirty Love first, I had to read this trilogy. And when I saw Sebastian York narrated the audiobooks? Bingo! We have a winner!

I didn’t like Creighton Karas in The Dirty Girl books, and quite frankly, I didn’t love him at first in this series, but boy, I grew to lust after him, then eventually love him.

I am going to put the blurb for the first book, Dirty Billionaire, here for you to get a feel for what I’m talking about.

I’ve got a big dick and an even bigger bank account. That’s pretty much where my bio ends. Honestly, I don’t need to say anything else. I’ve just sold 99% of women on going home with me.

That’s because I am.

And guess what? It works for me just fine.

Or at least it did.

Until I met her.

Books talk about sparks flying. Fuck that shit. With her, it was like emergency flares mixed with jet fuel. Or maybe just straight up napalm.

She didn’t leave her name or number when she disappeared from the hotel room after the hottest fucking night of my life. Now I’ve had a taste of unicorn pussy—the sweetest, rarest of all pussy—and I need it again.

So what’s an asshole to do?

I took this problem to the street. A missed connection gone viral.

And when I find her? I’m keeping her.

Holly Wix is a budding country music star. Beautiful, with the voice of an angel, Holly has escaped the trailer park by winning a country music show. But her record company is forcing her to be in a fake relationship with another country star. After being pushed around one too many times, Holly needs to be a little reckless, and heads to a New York bar on Christmas Eve and has hot and dirty sex with a stranger. After leaving during the night, Creighton wakes up desperate to find her, and places a classified ad that goes viral.

When Holly shows up to respond to the ad, she chooses wisely and realizes that Creighton may be able to help her out of her contract, so she goes along with Creighton’s wishes. At first, it’s all about wanting to own his little toy. Holly knows this, and she likes him, she likes the sex, so why not? She wasn’t using Creighton for his money in any way. She was strong and independent, but stuck in a hard spot (that’s for sure teehee).

“Just give me a chance to show you what I mean, Holly. I don’t want a docile little Barbie doll. I still want your spark and your fire. I don’t want to tame it; I just want to guide it. And at the same time, I’ll take every burden that’s been weighting you down, and make them mine.”

Holly is submissive in bed, to a point, and Creighton is a dirty dominant. YUM.

“Do you want to know what I do to naughty girls?”
She nods.
“Anything I want.”

Though Holly is strong and driven, she knows that taking direction from this dominant billionaire would bring on some hot sex.

“I want him to tell me what to do, because if he can make me feel this way with nothing but words and a few kisses, I want more.”

But no matter what, Holly’s career is her number one priority, and she won’t let anyone stand in the way of her making it as a country music star. Not even the gorgeous, domineering billionaire.

“My dreams are all I’ve got left and I’m not giving them up for anyone.”

Creighton quickly realizes how serious she is, and he only wants more. And he is willing to do what it takes.

“I’m going to own this woman- body, heart, and fucking soul.”

Holly has plenty of doubts. And in Dirty Pleasures, book 2, she spends a lot of time running away. But I love how he chases.

“She doesn’t get to leave me. I’m not fucking done with her.”

He starts to realize that Holly is no shrinking violet. He had his hands full and needed to really work for this one.

“Christ, this woman is like none other; she’s a complete contradiction. An innocent sex kitten. A tentative temptress. My every fantasy wrapped up in a package that’s more dangerous to handle than dynamite.”

But he totally makes sure she doesn’t forget him. Oh boy…is it hot in here?

“You’re going to go bend over the end of the bed, spread your legs, and I’m going to spank that tight little ass and your naughty little cunt before I fuck you so hard, you’ll still be feeling me tomorrow when you step onstage.”

Though I didn’t love The Dirty Billionaire Series quite as much as Dirty Girl and Dirty Love, it came pretty close. Meghan writes amazing sex scenes, and her guys are the perfect mix of dirty talking, dominant romantics who will do what it takes to earn the love of a good woman. Though it’s a dominant billionaire trilogy like so many others, Meghan March really made the Dirty Billionaire trilogy into something unique and special, and I am so glad I didn’t let ‘billionaire’ and ‘trilogy’ keep me away. Meghan March has earned me as a fan for life, and I plan on catching up on all of her books. 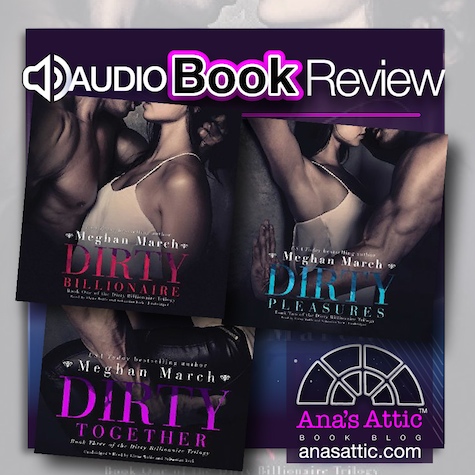